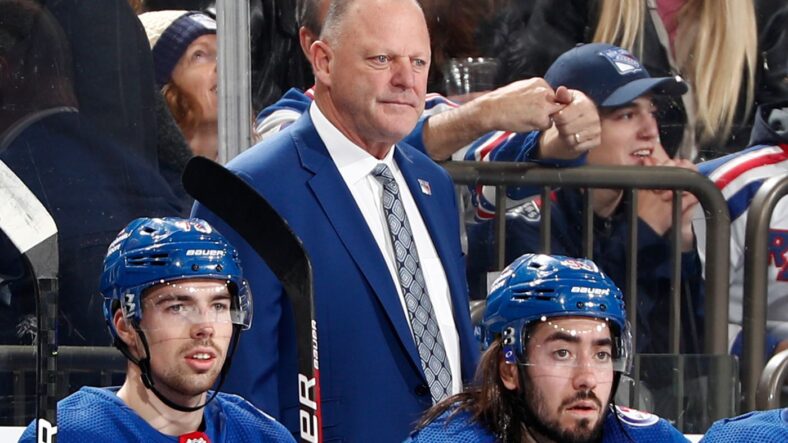 The Penguins deserve every bit of credit for what they are doing to the Rangers in this first round series. They’ve been better, and it honestly isn’t even close. But the Rangers, specifically Gerard Gallant, have made it easy on the Penguins. There have been no in-game adjustments, no lineup adjustments, just hoping what hasn’t worked will eventually work. The Rangers lack of adjustments falls squarely on Gallant’s shoulders.

Don’t get me wrong, I think Gallant is a coach that can get them to the Promised Land. He might be in the running for the Jack Adams this year, and while there were valid criticisms all season, he still found a way to get the most out of the roster he was given. Until the playoffs.

Before Game 4’s debacle, there were some coaching adjustments we wanted to see from Gallant. Of course, none of them were made, specifically lineup choices, and the Rangers were laughed out of Pittsburgh, a city that sees so little sunlight I’m amazed residents can even smile. That’s not hyperbole, that’s fact. Pittsburgh gets 160 sunny days a year, while the US average is 205 sunny days a year. It’s depressing.

Now with the lineup expected to be the same —including dressing Patrik Nemeth, who looks like he’s playing for Pittsburgh– the Rangers lack of adjustments are starting to become infuriating. Every coach has blind spots and weaknesses, and the injuries to Barclay Goodrow and Ryan Lindgren aren’t helping, but to throw the same thing at the wall and hoping it sticks isn’t good coaching.

For what it’s worth, even Libor Hajek is a better option than Nemeth right now, even if he’s not the best option (Zac Jones is). The Rangers lack of adjustments begins and ends here, with an inability to see what is right in front of him. Nemeth has been actively losing games for the Rangers, and there is no lineup adjustment. We can argue about what the fourth line is doing, but this is one area we all agree.

There are also the in-game adjustments, which fall solely on Gallant. Specifically, matching lines against Sidney Crosby. To Gallant’s credit, he moved off getting the fourth line out there, which got wrecked after Goodrow’s injury, to the top line, which has been abysmal. A grain of salt is required here though, as the Panarin line doesn’t play defense and you don’t really want to throw the kids out there against Crosby when he’s playing like this. So there aren’t many options.

As an aside, the inconsistent forechecking and backchecking is primarily a player issue, not a coaching issue. The players aren’t doing what they need to do. We’ve seen they can do it, but they aren’t. The Rangers lack of adjustments there aren’t on Gallant, at least not fully.

We can blame injuries all we want, but they are no excuse. One injury to Ryan Lindgren shouldn’t set the team this far back where there are no other options on the table. The taxi squad is there for a reason. The depth players are there for a reason. By not utilizing one of their better strengths, roster depth, the Rangers lack of adjustments get thrust into the spotlight.

At this point, the roster decisions fall squarely on Gallant’s shoulders. He has not made any lineup changes, and he has only changed up the lines once for a period, only to go back to the same lines for Game 5. After everything that was done at the trade deadline and the play we saw post-deadline, to see the Rangers crumble like this is a coaching concern. Inability to adjust has put the Rangers down 3-1 in this series. The Rangers can still win this series, but the right adjustments need to be made.