The Rangers pre-deadline form has shown up again, and they are getting crushed for it 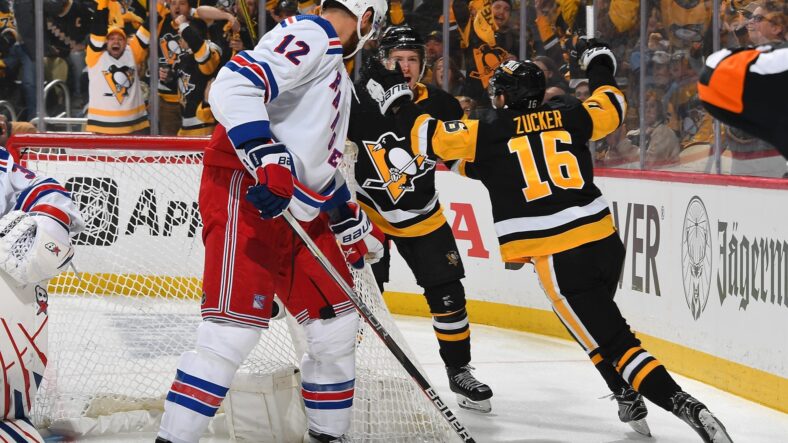 The two games in Pittsburgh have been a gut punch for Ranger fans, and hopefully a wakeup call for the New York Rangers. Scoreboard aside, which is ugly, the Rangers pre-deadline form has reared it’s ugly head, and they’ve been absolutely horrid. The play is pretty familiar though, as it was how the Rangers played through most of the regular season. Without goaltending and an elite powerplay, they are getting crushed for it.

Say what we want about goal reviews, in which the Rangers are 0-for-3, but those are now small potatoes. The Rangers are not playing basic fundamental hockey, and it all came to a head last night.

All of this is interconnected to why the Rangers look so bad. The Penguins are picking them apart, mostly because whatever structure they had post deadline hasn’t been there.

The Rangers run a 1-2-2 forecheck, which is pretty standard across the NHL. The problem this series hasn’t been the first man in, it’s been with F2 and F3 not reading the play. When they get beat, it creates chances the other way in either an odd-man rush or with defense backing off the blue line.

A defenseman can’t step up at the blue line, as preferred, without proper backcheck. When F2 and F3 get beat, then the Rangers are relying mostly on F1, who should be backchecking from in deep, to get back and provide puck support. That’s obviously not there. Thus, speed through the neutral zone pushes the defense back and opens up ice for the Penguins.

There’s also no puck support on clears, to which the Rangers are wholly reliant upon, which forces more turnovers and gives the Penguins more chances. It doesn’t take a rocket scientist to see why the Rangers have looked so bad when they aren’t playing fundamentally sound hockey. They look like a pee wee team out there.

Funny enough, the only players who are playing well are four kids with no playoff experience – Filip Chytil, Alexis Lafreniere, Kaapo Kakko, and K’Andre Miller. It’s all the guys who are meant to be the top players, starting with Mika Zibanejad all the way through Jacob Trouba, who have been bad throughout this series.

The series is not over, but if the Rangers continue to play this way, it will be on Wednesday. For the Rangers to be a true playoff contender, they need to get their collective acts together. This starts with the team leadership and the veterans who simply haven’t shown up all series. The Rangers can’t win with their star players performing like this. No team can.