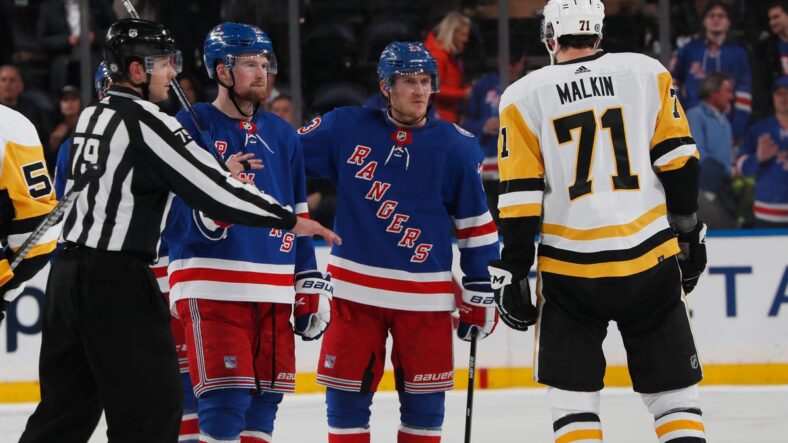 We’ll keep this short. The Rangers needed to be better in the grand scheme of the game. They came out guns a-blazing in the first period and scored a big goal and had all of the momentum, and then they were not the same team after that. I’m hoping it’s just a little rust from not playing hockey for over a week.  I see we are also already getting the “Refs make a game changing call” early on in our return to playoffs with an egregious disallowed goal for Filip Chytil after Kaapo Kakko was taken down by Brian Dumolin and crashed into goalie Casey DeSmith.

You want to talk about welcome to the playoffs, how about the performance by Igor Shesterkin? He made 79 saves on 83 shots in his playoff debut, shattering a decades-old Rangers record. He was not at fault for how the game went. The Rangers in the second period gave up a franchise worst 25 shots on goal in the period. You are not only not going to win many hockey games if you do that, but you will get trounced in this series. Hopefully now the kids got their feet wet with the thrill and utter pain of NHL playoff hockey and will come out and absolutely run the table in game 2.

After a debatable pass by Kaapo Kakko wound up drawing a penalty, the Rangers took advantage on the powerplay immediately. The Rangers had been moving the puck well, and Adam Fox got this point shot through the Ryan Strome screen and over Casey DeSmith’s shoulder.

What a great cycle from the Rangers, eventually drawing Sidney Crosby way too low. Andrew Copp filled in the open space, Ryan Strome hit him.

After one of the best saves I’ve ever seen in a playoff game, the Penguins kept pressing. They had the Rangers running around, and two Rangers went to Crosby with the puck, leaving Jake Guentzel open in front.

Again Crosby drew a pair of Rangers, which allowed Guentzel to get to the net. No pressure in the neutral zone or pressure on the forecheck allowed him to gain the zone with speed, which backed up both Fox and Lindgren.

With the Rangers reeling, the co-captains –let’s be real, they are the co-captains– came through while shorthanded. After the faceoff win, Zibanejad won a puck battle, springing him and Chris Kreider for a 2-on-1. Kreider has had the type of year where he doesn’t miss these.

After the great save by Shesterkin, the Rangers were scrambling again, and the disarray again favored the Penguins. This time they got two guys in behind the defense, which allowed Malkin to deflect the point shot past Shesterkin. As soon as Chytil left the slot, we knew the game was over.

Ryan Lindgren is reportedly dealing with a lower body injury as he kept leaving and coming back. For the sake of his health and with so much depth, I hope to see one of Justin Braun or Zac Jones in the lineup if he’s truly banged up. There is absolutely nothing the Rangers gain by playing a 50% Ryan Lindgren when they have two capable guys who can fill in for a game. But then again, hockey brain go brrrrr. See you for game 2, hopefully that doesn’t go into triple OT.