Can (Should?) the Rangers re-sign Copp? Vatrano? Both? 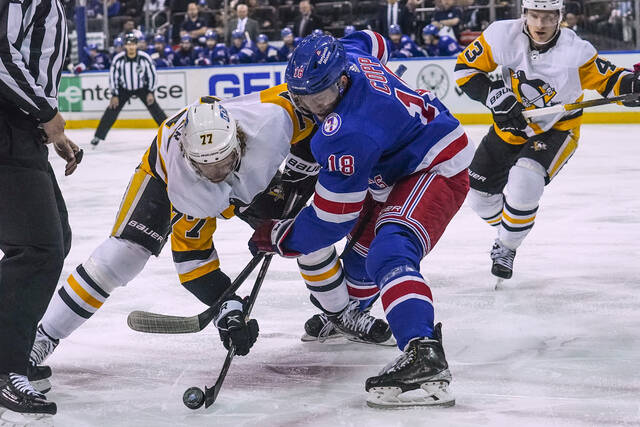 Both Andrew Copp and Frank Vatrano have endeared themselves to the Rangers fanbase since the trade deadline, with both succeeding in critical roles for the Blueshirts in their push for the Metro Division crown. There is already talk about where they fit long term. But given the Rangers cap crunch, can, or even should, the Rangers re-sign Copp? Vatrano? Can they fit both?

Should the Rangers re-sign Copp?

Andrew Copp has been a bit of a revelation since coming to the Rangers. Finally on a consistent line with consistent linemates –something he didn’t get in Winnipeg– he’s shown great chemistry with Artemiy Panarin and Ryan Strome. Copp is currently 6th among Rangers forwards, post deadline, in xGF% at 56.64. Which is actually well ahead of Panarin (51.27) and Strome (44.64), who are the bottom two among Rangers forwards.

Now this is all small sample size, and not meant to poke at Panarin and Strome. It’s simply meant to show how great Copp has been. He also adds much needed flexibility, and can play both C and RW, something that the Rangers need with their relatively thin center depth. If the Rangers re-sign Copp, his positional flexibility will play a major role.

Copp also comes in well under Strome’s expected salary demands. Using EH’s contract projections from last year, which will only go up for Strome given his counting stats, came in at around 5-6 years and $6.5 million at the median salary. Assume that gets a 5% bump since Strome will put up 20 goals and 50 points this season. Copp comes in at 4-6 years at $5 million in the median salary. Fewer years, fewer dollars.

There is nothing wrong with letting Strome walk. It seems that if the Rangers re-sign Copp, it will be as a Strome replacement, and that’s perfectly fine. Especially when you realize they have the same amount of points this season.

The only reason I can think, as of right now, to not re-sign Copp is if he has a monster playoffs and his contract demands go through the roof. At just 27 years old, that could happen.

The case for Vatrano

Frank Vatrano gave the Rangers something they sorely needed: A pure shooter. He shoots from anywhere, and he’s proof that you can’t score on 100% of the shots you don’t take. There are some goals he has that goalies really should have stopped. But that’s neither here nor there.

For Vatrano, it’s beyond the goals. He adds a needed element to the Rangers that forces the opposition to respect his shot, opening ice for Mika Zibanejad and Chris Kreider. He’s also tenacious on the forecheck and backcheck, something Gerard Gallant needs in his system. Vatrano is right there with Copp in xGF% (7th – 56.13) as well.

Vatrano is projected to get 4 years and $4 million or so as the median projection from last season.

The case against Vatrano is the cost and the long term fit. The Rangers do need centers, which is why Copp gets most of the attention. Assuming Kaapo Kakko and Sammy Blais are both healthy and with the Rangers next year, is Vatrano a luxury? He could be.

The case for both

The Rangers have a short window of Panarin, Zibanejad, and Kreider all playing at or above their contract worth. This window coincides with cheap contracts for their top picks (Kakko, Lafreniere) and their stronger depth players (Chytil, Miller). The cap always finds a way to work itself out. And the Rangers need to continually add depth scoring to make it work.

We’ve seen what having three dangerous lines can do for a team, and it’s critical for the Rangers to continue to have that dynamic. In the event that Kakko and Blais are back and healthy next season and the Rangers keep both Vatrano and Copp, we’d be looking at a very similar top nine for the Rangers. This, in turn, makes the fourth line stronger.

Assuming Vitali Kravtsov is not an option, and until proven otherwise, he is not, then the Rangers need capable middle six bodies. If the Rangers re-sign Copp and Vatrano for $10 million total, which would likely be the best case scenario, it’s a big win.

If we assume keeping both is $10 million total, the Rangers would be left with $2.7 million to re-sign Kakko and Blais and add 2 fourth liners, a 7D, and a backup goalie. That’s not enough money to make it all work. Even with trading Patrik Nemeth, the numbers don’t add up. The best case scenario is the Rangers needing $7 million for these roster pieces.

This is where committing $5.4 million to both Goodrow and Reaves comes to bite the Rangers. That $5.4 million for what amounts to, in the best case scenario, a fourth liner and a 13F isn’t good cap management. We knew that already, so let’s not beat a dead horse.

The easy way to make it work is to kick the can down the road a year, like they did with Henrik Lundqvist. Get some guys to sign a one year deal with the agreement that they get their extension in January next year. The Rangers free up $5.1 million in salary in 2023-2024 with Reaves and the buyouts expiring.

If there’s one thing the Nikita Kucherov situation taught us, it’s that the cap is really just a suggestion and not a rule. Chris Drury can make it work.