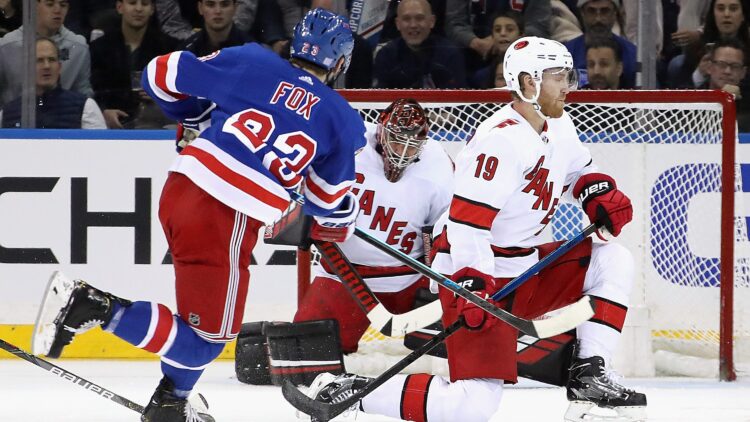 Analyzing defensemen in the NHL is a bit of a black hole of questionable stats and context. There’s more nuance to this position than in many in pro sports. How the defensemen control the puck for defensive zone exits, for example, is something that the catch-all stats don’t emphasize. For the Rangers, it gets even hazier because of the lack of actual NHL forwards for most of the season impacted the overall team. But the Rangers defensive zone exits appear to be a strength, at least for those who will continue to be key players down the stretch.

This is where Corey Sznajder and his All Three Zones project comes into the forefront. If you don’t know Corey, you’re missing out. He manually tracks every single possession of every single game in the NHL, tracking what happens what a player has the puck on defensive zone exits and offensive zone entries (and more, but that’s the focus today). 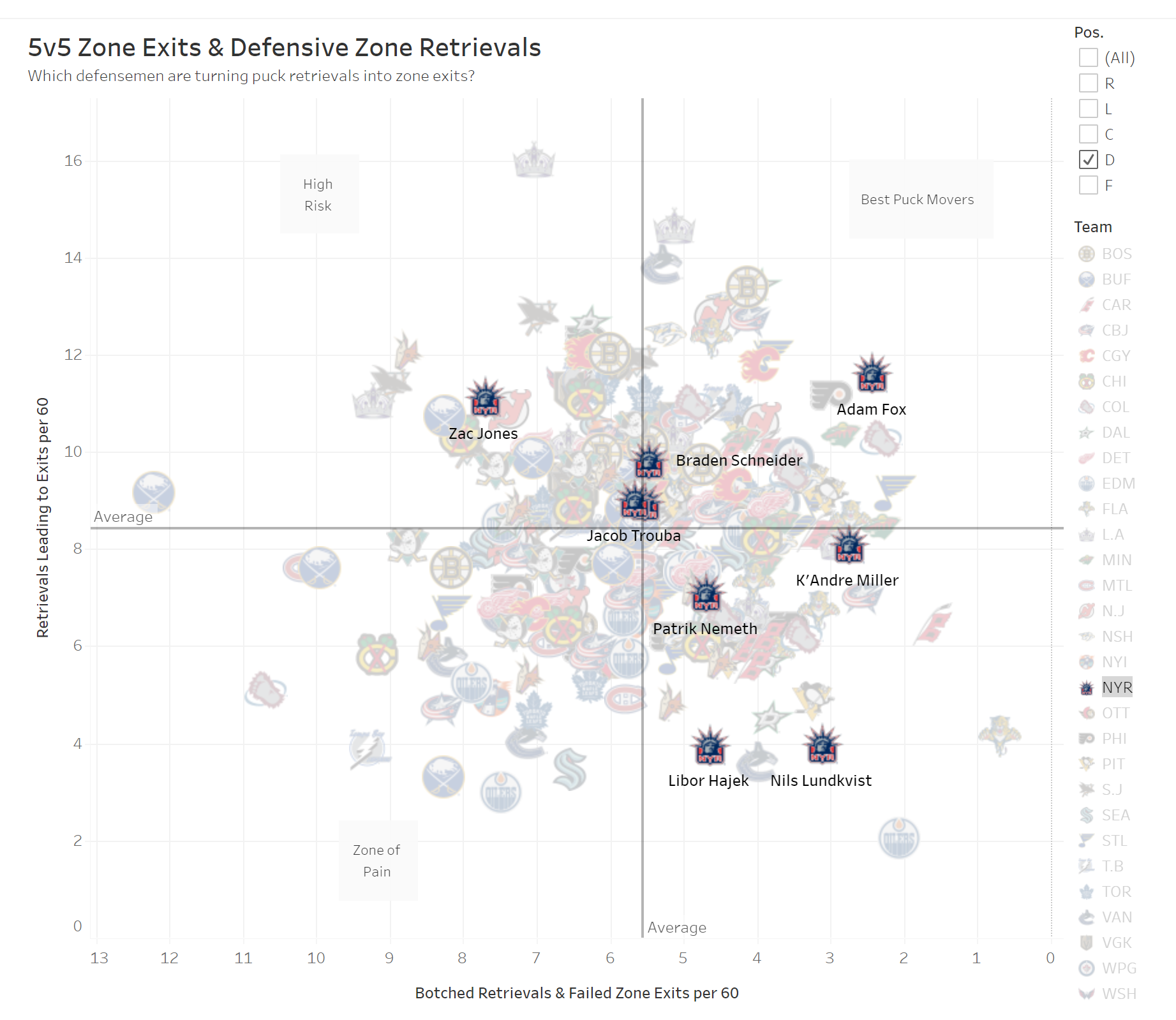 This one is puck retrievals in the defensive zones leading to successful breakouts (exits) vs. botched plays. A botched play is what you think it is. The top right quadrant is good. Bottom left is bad. Bottom right is safe. Top left is high risk.

For the Rangers, the first focus is on defensemen moving the puck out of the defensive zone. It’s no surprise that Adam Fox is not only the best on the Rangers, but among the best in the league. The Rangers rarely botch a play when it’s Fox retrieving the puck and starting the breakout. If you’re looking for Ryan Lindgren, he’s right there with Jacob Trouba.

Another fun fact is that both Trouba and K’Andre Miller are average to good puck movers in the defensive zone. Miller is a little safer, with fewer botched exits, but also fewer clean exist. Trouba has more risk and more reward. This again jives with the eye test.

Braden Schneider, who was not a noted puck mover when drafted, has shown a great ability to jump in offensively, which translates to his ability to read the play in the defensive zone. He is a little more risk/reward that Miller, but he has better success than both Lindgren and Trouba. 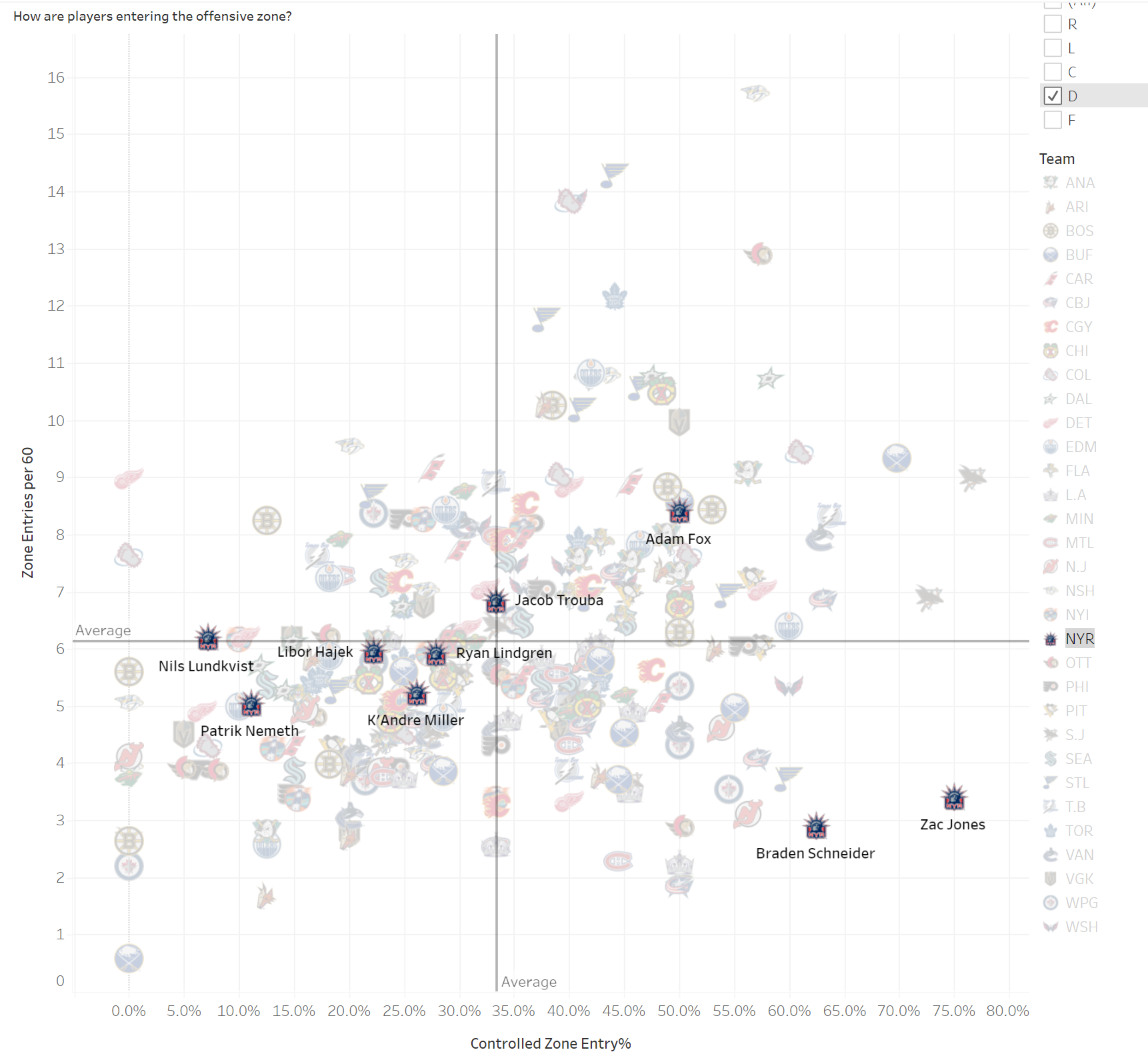 Before we look at offensive zone entries, the guy at the top right breaking the axes is Roman Josi. What a year for him.

Again Fox is the best on the team. But the issue here is the Rangers have the majority of their defensemen, including half their top four, in the “bad” section here. They aren’t atrocious, but they could be better. This isn’t necessarily on the defensemen, since if you recall the Rangers had 6 AHLers or 4th liners dressing on a nightly basis. Zone entries are usually a split between forwards and defense, whereas you generally lean on defensemen to start the breakout in the defensive zone.

Something to watch is both Schneider and Zac Jones. Both are safe with zone entries, and at least passable with zone exits. This could be the third pair next year. In terms of exits and entries, you could do far worse than that duo.

When the playoffs come rolling around in two weeks, the Rangers defensemen will be pressured regularly, and it will be on them to keep the opposing forecheck honest. Zone exits don’t appear to be much of a concern, but they will get tougher as the opponents get better. As for entries, well the offense has been better as a whole since the trade deadline. Perhaps more than just Fox will be able to generate controlled entries.