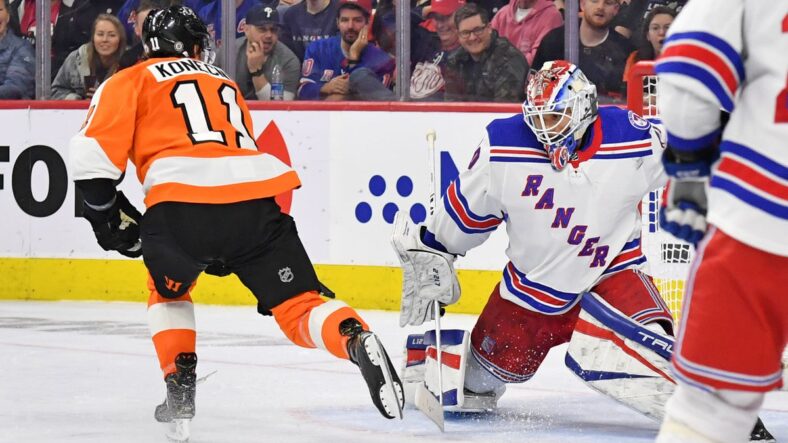 Not the smoothest, or most fun games to watch, but a 4-0 win over the Flyers is always a good time. The effort was not the greatest, both teams had the optics of really mailing it in. With the Flyers dressing 6 players with less than 8 games of NHL experience, this was not going to be a hard fought game by any means. Massive pre-season game like vibes. Doesn’t mean there were not a few good story lines to go with the night.

For one, I rag on him, I’ve critiqued him, but Alex Georgiev played a great game. It’s nice that he seems to be getting hot at just the right time. Igor Shesterkin might need his rest, and you want your backup to actually be useful when you utilize his time. With the Rangers clinched and playing lesser opponents this time of the year, maybe let Georgiev get 3-4 games in before you go Igor or bust in the postseason.

This was also the Kaapo Kakko game. Since returning from his injury, Kakko has been flying. He and Filip Chytil were the most noticeable Rangers on the ice last night. Kakko with his 6th career 2-goal game will help his confidence soar to great heights. All that’s missing on their line is that Alexis Lafrenière needs to be their other winger.

Lafrenière was a healthy scratch to get some rest, and I agree with that decision. Lafrenière has never played this many games before, the Rangers have the depth to fill in the holes, and maybe this motivates Lafrenière whenever he comes back to the lineup. With so few games left, knock on wood that they continue to be healthy for their mainstay roster players.

Last thought on the night. It has been absolutely hilarious to hear about Panarin and his “down year” from some pundits. He has 89 points on the year. In his last 6 games, Panarin has 4 goals, and 5 assists. To say he is getting hot at the right time is an understatement. I cannot wait to see what he and the rest of the stars on this team will do in May.

Barclay Goodrow and K’Andre Miller combined to force the Flyers into the defensive zone turnover. Then the Red Sea kind of parted for Kaapo Kakko, who was given all day to pick his spot.

Filip Chytil did the work on this one, combining with Goodrow to force a turnover deep in the offensive zone, and this was just a perfect pass to a well covered Kakko.

Another offensive zone turnover for the Flyers, and what a great pass by Jacob Trouba to Artemiy Panarin.

The Rangers didn’t generate much consistently on offense, which explains the lack of actual shot attempts from anywhere dangerous. Still, they capitalized when they needed to.

The Rangers kind of sleep walked through this one, with the Flyers more or less getting the advantage in quality and quantity. But the Rangers did what they needed to, and had flashes where they woke up. It’s clear this team is looking at the playoffs, but they still took care of business. Not the best kind of game though.

Other than those points, this game was pretty bad product wise. The Flyers are a terrible team and nothing brings me greater joy than them being bad by accident this season. How their ownership and management think they’ll be a playoff team next season is beyond me.