The Rangers can still win the division 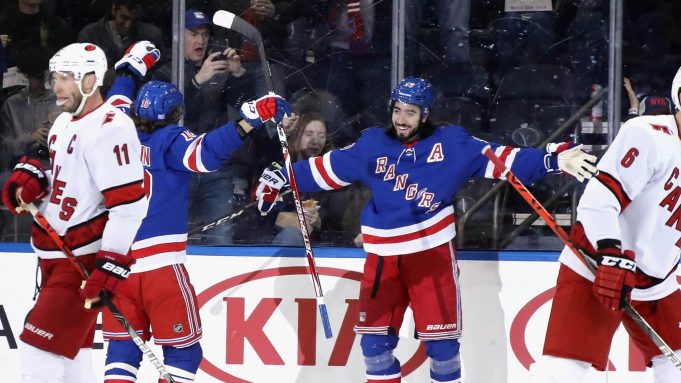 Here’s something we didn’t think we’d say this season. The Rangers can still win the division. The combination of the Carolina Hurricanes being near unstoppable, coupled with the significant struggles the Rangers had pre-deadline made this seem like a pipe dream. But here we are. The Rangers are just two points out –Carolina does have a game in hand– and have a pretty easy schedule to close out the season.

The Rangers have 11 games left in the season, and just 5 are against playoff teams. Of those five, two are against the Canes, so those will be important if they want to win the division. They also get Pittsburgh tonight, Boston, and Washington. It is worth noting that the Rangers close out the season with three of four games against playoff teams (Boston – 4/23, Carolina – 4/26, Washington 4/29). Those games may become important games, and not rest games.

As for Carolina, they have 12 games left, but only three are against playoff teams (Rangers twice, Colorado). While we want to assume they win all nine of those games against non-playoff teams, that’s unrealistic. In fact, Carolina is having a bit of bad luck. They are 4-3-3 in their last 10 games, and are 1-2-1 in their last four. So the Canes have the easier schedule, but they are not finishing the way they usually do.

But don’t look now, the Rangers are a top-five team post deadline since their shopping spree.

What if the Rangers win the division?

So we’ve established that the Rangers can win the division, but what happens if they do? Aside from the glory, the Rangers might actually hurt themselves if they do. Big caveat is you don’t play with an eye on your playoff opponents, but it’s hard to envision a situation where the Rangers are better off in the playoffs by winning the division.

Should they stay in second place, they get Pittsburgh in Round 1, and then the winner of either Carolina/Boston or Carolina/Tampa in the second round. Washington, as by far the worst playoff seed, will get Florida. If the Rangers win the division, they get one of Tampa/Boston in the first round, then one of Pittsburgh/Carolina in the second round. Meaning there is a chance they get Tampa, Carolina, and then likely Florida should they win two series, which is an absolute gauntlet.

Believe it or not, the Rangers can win the division, and you can bet they will be going for it. That first game against Carolina next week is the big one, but the Rangers can’t look past Pittsburgh tonight and Ottawa over the weekend.