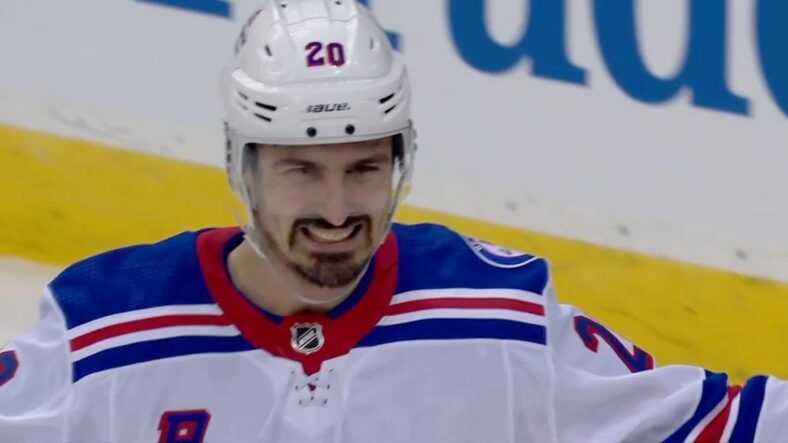 The Blueshirts didn’t have a strong offensive game, choosing to play sound defense and capitalize on their chances. This was a very low event game, with both teams sitting under 1.75 expected goals at even strength, per Natural Stat Trick, and combining for just 72 shot attempts.

Worth noting that Alex Georgiev, the scapegoat for a bunch of the fan base, was solid last night.

Bad turnover by Jacob Trouba to Yegor Sharangovich here. Georgiev has this weird habit of throwing his glove at breakaways, which is a really bad approach to breakaways. It explains why he always feels like he’s lunging and flailing. That glove needs to stay on his pad.

After a thunderous hit where Braden Schneider had to defend himself, drawing an instigator penalty in the process, Ryan Strome was welcomed back to the powerplay with a great passing play. There’s not much even the best penalty killing teams can do here, as you have to respect Chris Kreider low and Artemiy Panarin high, leaving Strome open in the slot. The little shoulder fake drew the defender up just a little bit, leaving that pass lane to Strome open for Kreider.

Chris Kreider is a cheat code in front of the net. Unbelievable. That’s a team record 25 powerplay goals.

Justin Braun got his first as a Ranger, playing his off-side to boot, on a shot that Nico Daws probably wants back. If Braun-Schneider can hold their own, then the Rangers truly did address every need at the deadline.

The Devils had a pretty good game here. They got the majority of the quality and quantity of shots, mostly in the second and third periods. But don’t let that fool you, as this was a pretty low-event game with neither team generating much sustained or consistent pressure. 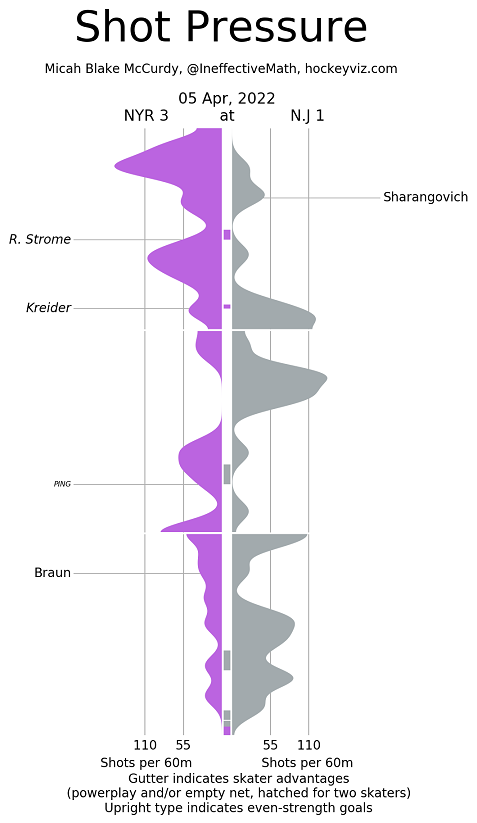 Game flow shows what we saw above, that after the first period, the Rangers really didn’t generate much offensively. They picked their spots and played a very sound defensive game instead. Playoff teams win all types of games, and this is one of them.

The Rangers snapped their two game losing streak, something they seem to do quite well. They’ve only had one losing streak of three games, usually ending these at two. Again, another good trait to have for a team heading to the playoffs.