If you like high-scoring hockey, this was the game for you against the Red Wings. The types of goals given up had a throwback to 80’s hockey with excruciatingly bad goaltending on either side. It’s been the narrative all season long, but Alex Georgiev is just not the answer as the backup.

The Rangers need someone to come in here and just give the club a chance at a save. Georgiev was battling on routine shots and his confidence cannot get any lower. It’s not hyperbole to say the Rangers have both spectrums of goaltending this season. It’s a disservice to your team to subject them to this level of mediocrity in net. This didn’t stop the Rangers though, who are unbelievably deep now, to go on the road and on the second half of a back-to-back and steal a win they never should have had to steal.

It’s shiny new toy syndrome for sure, but are Frank Vatrano, Tyler Motte, and Andrew Copp playing themselves into future contracts on this team? Copp getting the OT winner may all but guarantees that. Since that horrendous showing in New Jersey, the Rangers have gotten better and better in their underlying numbers since they can now run four lines efficiently. A big factor for that is those acquisitions to the group.

Who knew replacing guys like Julien Gauthier, Morgan Barron, and Greg McKegg (who did dress due to the injury to Strome) would result in the team producing at a better rate? Get NHL caliber players, get NHL caliber results. Just wait until this team is running at full health, it will be hard to say who’s a weak link.

Patrik Nemeth forced the turnover at the blue line, which sprung Ryan Reaves for the quick transition. Reaves’ pass was broken up by Filip Hronek, but he broke it up right back to Reaves, who put it back in the empty net.

Clean faceoff win leads to the set play. Braden Schneider touch pass to Nemeth as Filip Chytil got in front, and he got his stick on Nemeth’s shot. Set faceoff plays off clean wins are nice.

This is good puck movement and a great shot, but it’s clear Georgiev was too deep in the net and didn’t track it well. This is not a confident goalie.

This is what Gerard Gallant wants out of his team. He wants them to get in on the forecheck, which both Mika Zibanejad and Frank Vatrano did. They forced the turnover, and hit Artemiy Panarin for the quick goal off the turnover. The key thing is Vatrano getting body position behind the net, giving him time to find Panarin, as Bertuzzi was slow to cover.

Again one that Georgiev should have stopped. This is a broken play, but Adam Erne should not be able to put a backhand from the high slot through him. However it did look like this deflected off Adam Fox’s skate, so if it did, I take back this criticism.

Chris Kreider again. Sometimes you create your own luck on your quest for 50 goals.

Andrew Copp did the right thing by deferring to Panarin here, and then is rewarded by cutting to the net. Pius Suter lost him, and Panarin doesn’t miss that pass.

Imagine if Georgiev put up league average numbers? We’d be having a different conversation about how the Rangers dominated this game. 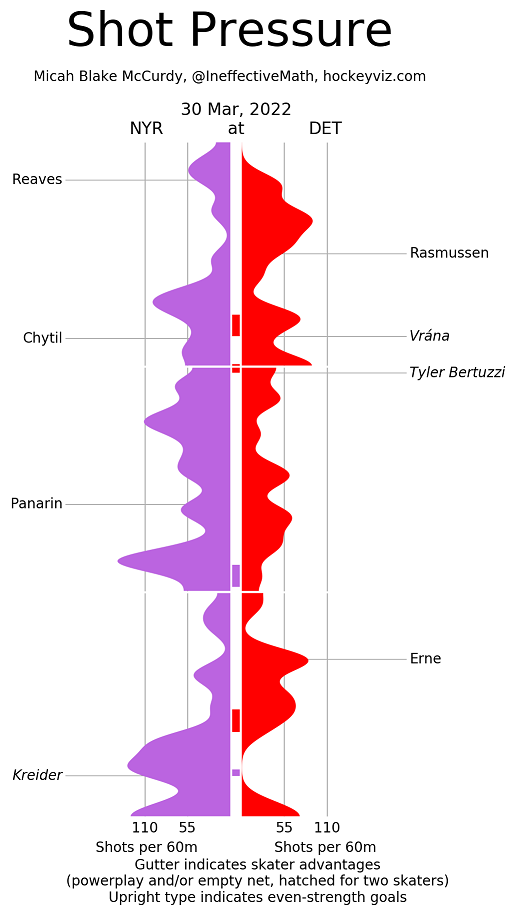 No NHL team is ever going to control and dominate from puck drop to final whistle, and the Rangers are no different. They did, however, control the overwhelming majority of this game. If Georgiev plays normally in net, we are talking about how the Rangers steamrolled the Red Wings.

Last thought on this one, on twitter I’ve been pushing an agenda that Chris Kreider is going to break Jaromir Jagr’s single season franchise goal record of 54 goals. He is inching ever closer to that mark, scoring his 46th last night. It’s been that kind of year for Kreider. He’s either tipping in pucks from nasty angles, or he’s banking them off skates, posts, goalies, it’s incredible.

It’d be tough to say there has not been a better late than never mentality with Kreider for me. This is what we always wanted from him, but he just could not stay consistent for years. His arc this season to not only score at record paces, but to come in and be a true leader night in and night out is inspirational and there’s just something different in the team chemistry this year. This group is special and they are going to be a force come May.