The Rangers might be who we thought they could be 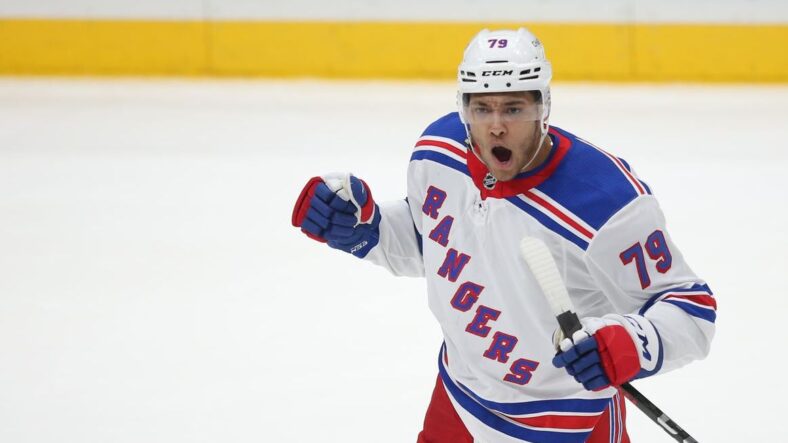 As it stands for who the Rangers might be in the 2021-22 season, I think two possible dates will stick out in my mind. First, Tuesday November 16th, which is when NYR put Sammy Blais on the IR with a season-ending torn ACL. Once that was announced the non-secret that was known since mid-July was solidified: the Rangers needed forward depth, particularly at right wing, ASAP. The second date might be Monday, March 21st, when GM Chris Drury went ahead and capped off a trade deadline with four NHL roster-related moves. 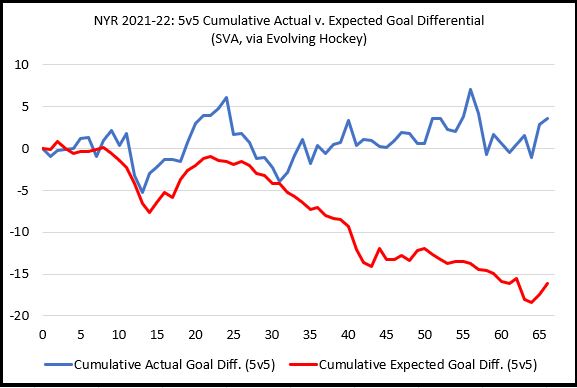 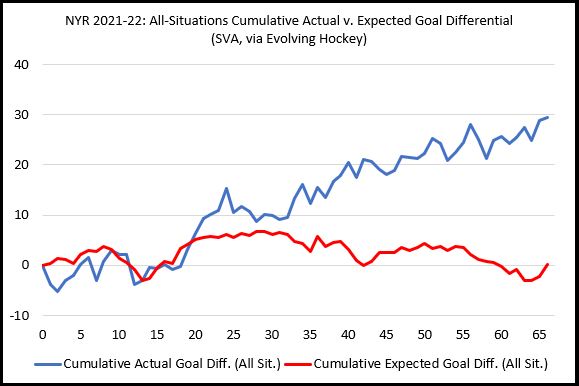 After the Olympic (non-Olympics) break, the Rangers were doing its usual thing pre-deadline: bleeding shots and chances while gutting out close games on the back of goaltending and strong special teams. This ground has been covered extensively, and while many of us kept hoping Drury would start the acquisitions early, the time seemed to slow as we crept towards the deadline and nothing came from the insiders (aka the official Rangers team account). 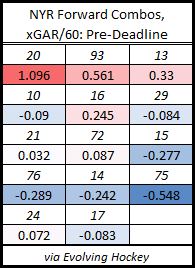 While we screamed into the void about forward lines that had a clear line of demarcation between top and bottom six, it just became more and more apparent that the Rangers would be (should be, given the cap situation) buyers as they kept winning. The above xGAR/60 ratings (Expected Goals Above Replacement, per 60 minutes of TOI; red = better, blue = worse) was obvious to anyone watching night in and night out: The bottom six had two to three players (at least) per night that were not impactful NHL talent. If the top six was rolling, then they looked like a team that could hang, but if they weren’t – it got ugly, fast. 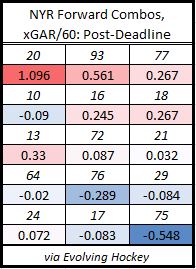 What Frank Vatrano, Andrew Copp, and Tyler Motte bring is badly needed flexibility forward group, improving what the Rangers might be. As you can see above and by comparing to the pre-deadline chart, the forwards now have decent to good depth across their top 9 at a minimum (plus Kaapo Kakko and Kevin Rooney ready to return, hopefully somewhat soon).

While I recognize you don’t build a team like it’s a video game, Drury actually treated the deadline a bit like that. It will remain to be seen if the players he went and got are enough for a serious run at a Cup, but it’s simple addition by subtraction. The forward group got immensely better not only because of who they acquired but because of who they ultimately replace. Sometimes it’s not the adds, it’s the deletes that improve who the Rangers might be. 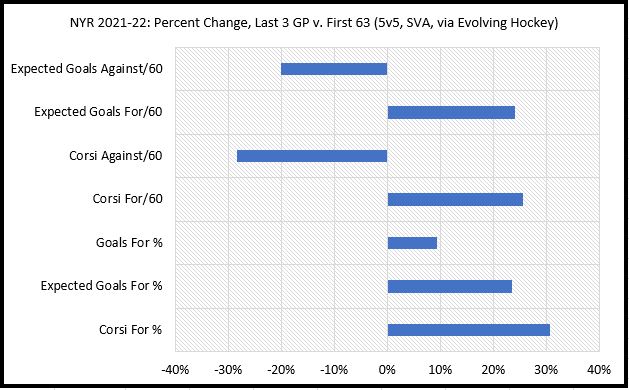 And so far, my friend, the returns of this approach have been fruitful. Now, I have to say that 3 games is meekly a possible indication of improvement; the Rangers must continue to out play, shoot, and chance their opponents throughout the spring to become more respected contenders. That being said, it is indeed a start. If the Rangers played at the shot attempt & expected goal level (per 60) that they have for the last 3 games for an entire season, they would be a top 10 team across the board in those metrics.

Overall, there is potential to look back on Monday March 21, 2022 as a key inflection point of the season, improving who the Rangers might be. Gone are the days (hopefully, possibly) where the likes of Greg McKegg, Tim Gettinger, and yes even Ryan Reaves are seriously considered for this lineup. Barclay Goodrow, Tyler Motte, Dryden Hunt, Jonny Brodzinski, and Rooney should be the five to make up the last three spots. That is finally a good problem to have (I lean Motte-Goodrow-Hunt, as all have historically strong metrics, but I’m not opposed to Brodzinski or Rooney mixing in!). 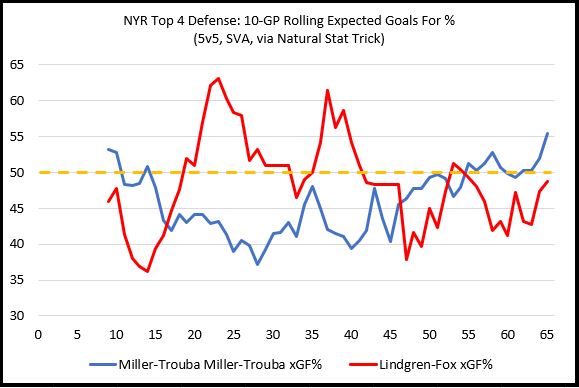 Now one item to keep an eye on: the defense pairs. Let’s start with the top four. As you can see above, K’Andre Miller & Jacob Trouba have been on a steady improvement in terms of their Expected Goals For % (10-Game Rolling Average) at 5v5. Ryan Lindgren & Adam Fox have gone the opposite way in the second half of the season, but truth be told I would rather have them struggling now than come May.

Overall, I think the step forward by Miller & Trouba is due to Miller really coming into his own, which means he should really get a shot with Fox. This could subsequently help Trouba, who has historically done better with a partner that puts a primary focus on quelling shots & chances (Lindgren’s primary impact). Worse case: you go back to the pairs as they were. 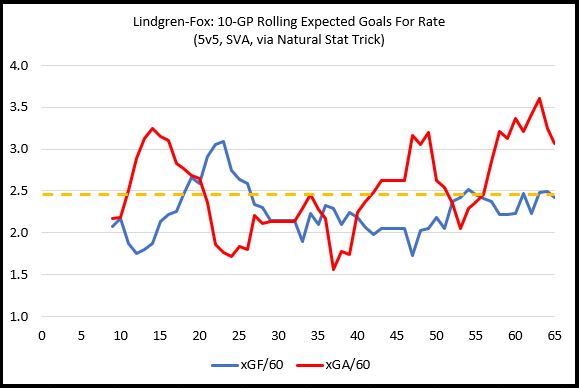 Overall, the issue with Lindgren & Fox has been scoring chances/expected goals against as of late. We know they may be dealing with injuries, but the good news is they haven’t really lost the overall ability to help generate offense while on-ice. 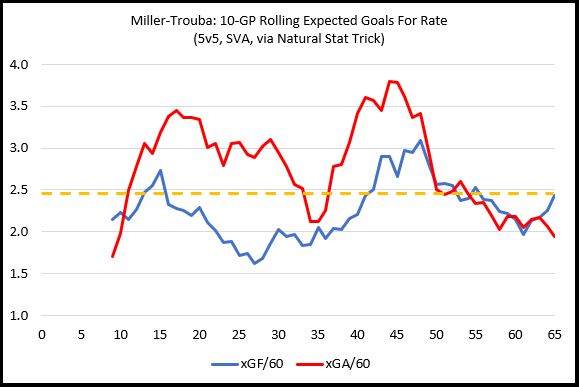 As for Miller & Trouba, their improvement in the scoring chances/expected goals against department is impressive. That area has been their weakness as a pair since last year, so to see that come down over a 15 game or so stretch is important.

If you’re a Rangers fan that has been watching consistently for the past few years, the cautious optimism you’ve felt about this team (at least in small pockets this season) after a few down years could turn to actual enthusiasm given the possible results of the trade deadline. I won’t go as far to discuss the playoffs – we’ll have that conversation soon enough – but after watching a bad 5v5 team win many games they should not have because of a Hart-level starting goalie, we’ll see if the Rangers can make us remember any other exact dates come this spring.

Oh, and Alexis Lafrenière leads the team in 5v5 goals since his NHL debut; he’s in good company.