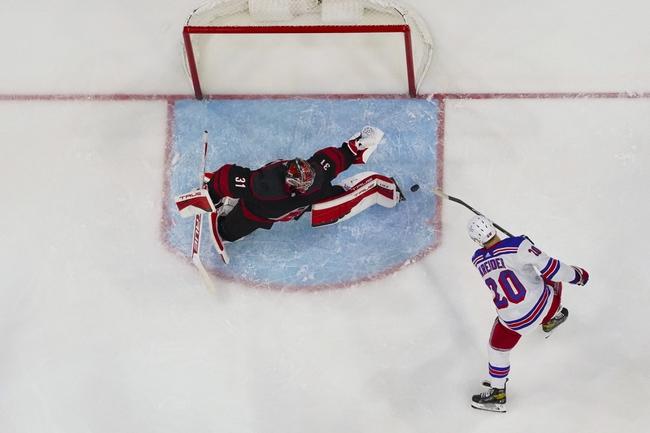 This might have been the ugliest win of the season, by far. A whopping 44 shots against, all stopped by Alex Georgiev in what could be his Rangers swan song. He badly needed this kind of game for a multitude of reasons, and he delivered.

This game brought back some bad Torts/AV PTSD, and it was hilarious to watch as Georgiev was the one dunking on the Canes. Getting boat raced in nearly every metric imaginable, the Rangers found a way yet again to rally in front of their goaltender and score some timely goals. No, this win model is not sustainable, but you know what? The Rangers just beat the Lightning and the division leading Hurricanes back to back and in regulation. These kinds of wins do loads for the psyche of an athlete. When your goaltender can bail you out on the second half of a back-to-back, you rally around them and go get the win.

This all starts with a faceoff win and Jacob Trouba pinching in to prevent Carolina from coming away with the puck. Zibanejad, Kreider, and Lafreniere had a good cycle here as well, keeping Carolina moving while Trouba got back into position. Right before Laf got the puck to the point, Kreider was able to whack the puck to him behind the net, who at that point was unguarded going back to the front of the net. That part is key, as Trouba’s one-timer was designed to be deflected by Kreider, who had two steps on the nearest defender.

This was all Carolina, don’t let the score fool you. But you didn’t need this heatmap or the flow chart below to see that.

There’s no telling what the Rangers will acquire at the trade deadline. I find it simultaneously calming and excruciating that we just have no idea what Drury has up his sleeve. But this team needs a reward 0f some kind, any marginal upgrades to the roster in turn can improve results.

Do you want AHL/NHL tweeners on your bottom six or would you prefer to have rental NHL forwards who know how to play? I take the latter every day of the week and twice on Sunday, especially when we’ll have over $25 million in cap space. Reward this group, they deserve it.