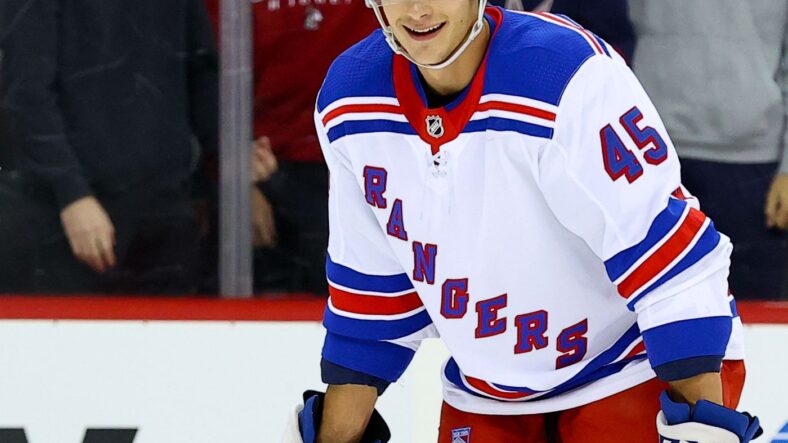 The Rangers took on the Sharks in their final game out west hoping for a 2-2 split. San Jose come into tonight holding on to the final wild card spot, but the four teams chasing them (Flames, Jets, Stars, Oilers) all have a higher point percentage.  Their season is certainly is hanging on by a thread as speculation begins to swell if they will be sellers at the dead line.  None the less a hockey game to be played, and Braden Schneider got his first NHL goal. Let’s get into it.

After a Ryan Strome penalty the Rangers went to work on the PK.  But off the opening face off, Fox cleared the zone and Mika and Kreider went to work.  It a great pass and finish, but this is a completely blown coverage by the Sharks. It a 2 on 2 and Jonathan Dahlen decided to attack the puck carrier instead of staying with his man.  A lack of communication from him and Burns and the Rangers capitalize.  First career short handed goal for Chris Kreider.

Rangers started the 3rd period with a bang as Braden Schneider nets his first career NHL goal.  It was a great play overall, as Chytil dishes the puck to Strome, and then continues his path to the net and draws to Shark defenders with him. Strome goes low to high to Schneider who catches puck on his forehand, in his hip pocket, under handles (does not stick handle) and lets it rip. You never forget your first.

With the net empty, Chris Kreider gets his 200th NHL goal. Solid Win.

Side note: Biggest news of the day is that my Marty Straka Liberty jersey arrived.  I have been after a Marty Straka jersey for years so here’s some high lights from the best Ranger line I have ever seen.