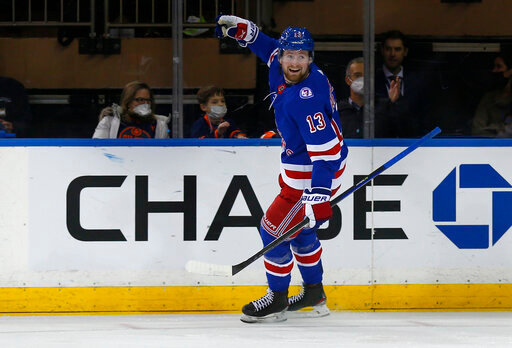 Last night was the Alexis Lafrenière show, and it couldn’t have come at a more opportune time with the absence of Artemiy Panarin. It isn’t that farfetched of a take that after watching the game, Lafrenière was the better of the first overall picks playing. A two point night with an opening goal, and a beautiful assist to Barclay Goodrow while being easily the most engaged he has looked. Playing on a line with Goodrow and Ryan Strome has been a spark for this offense. To be honest, even when Panarin comes back, with how good this trio has looked in two games, it’s hard to justify splitting them up.

What if Panarin played on a line with his playmaking ability with Filip Chytil and Julieh Gauthier? Despite lack of finishing, it’s clear Chytil is a shooter. He doesn’t have the best passing abilities like Panarin, Fox, Strome, or even Zibanejad have. Which in the grand scheme of things is fine, but for top nine dominance, this might be the formula.

If Gallant decided to roll out Kreider-Mika-Kakko, Panarin-Chytil-Gauthier, and then Lafrenière-Strome-Goodrow, would that really be a bad decision? Gallant distributes and allocates the top nine ice time extremely well, and this might be the winning formula. Yes, the Rangers go as far as the play of Zibanejad, Fox, Panarin, and Shesterkin, but if Lafrenière; your most important asset in this rebuild, is finally figuring it out playing with two solid veteran pieces, let it cook.

A lot of love has to be given to Alex Georgiev for his performance as well. Connor McDavid and Leon Draisaitl were scoreless and pointless and was in due in large part to Georgiev making some big saves. His greatest save of the night was a point blank shot from McDavid off a Ryan Lindgren turnover and him calmly catching the puck with the glove and freezing it. If this were early season Georgiev, it might have gone in. It’s great to see Georgiev confident after getting some run from the Shesterkin injury weeks ago. You need your backup goaltender to win you hockey games just as importantly as your franchise goaltender. Georgiev answered that call.

Another point in this Stranger Things universe is current Rangers scoring goals against their former teams. First it was Goodrow with his epic performance in Tampa after getting his Cup ring, and now it’s Strome against his former team. This is normally a lock to happen against the Rangers, but that curse has been at bay the last little while. I will never understand what is going on, but I am loving what I’m seeing. Both in what is happening with this team currently being in first place at the time of this writing, and a process of players not playing with fear of being benched. This post-David Quinn era is everything we’ve hoped for as fans the last number of years.

A major test is coming in the Vegas/California road trip later this week. The Kings and Sharks are not what they used to be, but look out for the Ducks and Golden Knights despite their COVID/IR problems. Both of those teams are going to be good tests for this Rangers team to see if they can continue this momentum of being a top team in this league. Of course, this recent stretch shouldn’t dissuade Chris Drury from adding a scorer at the deadline still, but we’ll cover that in a later piece.