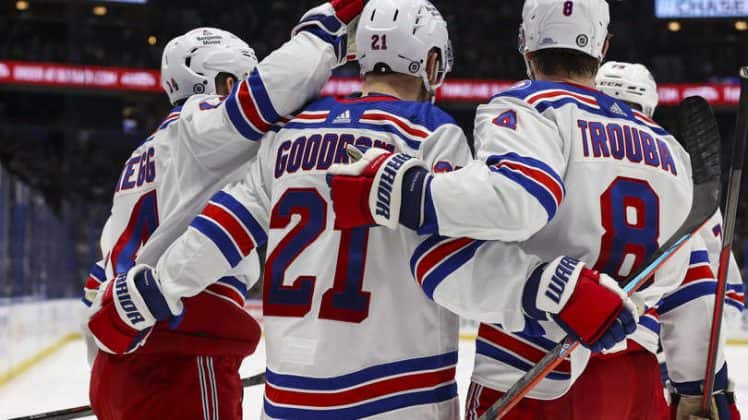 A very happy new year to all of you. Hope this year brings you great joy, success, and happiness. These things are all relevant when describing the game between the Rangers and the Lightning. Despite it being a coin-flip game with the shootout, the fact is they still beat the defending champs 4-3 with a rematch scheduled for Sunday.

The story of the night obviously was Barclay Goodrow’s return to Tampa since winning two cups with them as a great role player for their franchise. He would bring his “A” game as he tallied 2 goals –including a SHG as Tampa goalie Brian Elliot passed the puck right to him on an attempted breakout pass. That’s the kind of game you want from a bottom six guy every now and then when it was an off night for your top guys in regulation.

Alexis Lafrenière has rightly been a major topic of discussion this season. There are a lot of expectations and hopes for the first overall pick to finally begin playing like a first overall pick. He would be the beneficiary of another Brian Elliot gaffe as Elliot grabbed the puck behind the net, attempted to pass it, and put it right to Lafrenière who one-timed it right in the back of the net.

Like Kakko earlier this season, you hope that even though this goal was majorly because of the misplay by Elliot, that this is the turning point for Lafrenière. If you tell me he finishes the season with 20 goals however, I do consider that a win as all of his points have come at even strength in his career. Power plays absolutely pad your stats, but having a player accrue all of his stats at even strength can be a great look into how he would play in the playoffs when there are far fewer power play opportunities.

When the Rangers hired Gerard Gallant this past summer, the big thing for me was giving players as many opportunities as possible to help the team and grow individually. We’ve already seen that come to fruition with the play of Kaapo Kakko this season. Kakko himself has said in multiple interviews how much better it is to be playing with the same players most nights. He might not be a scoring machine quite yet, but his puck battles, and his defensive prowess as a forward are so evident and it really makes me excited about what he can be in 3-4 years. Are we looking at low-rent versions of Rick Nash or Mark Stone? If his point totals increase, I sincerely think it could be a possibility. Give credit to Kakko obviously for sticking with the process and putting in a great deal of work to improve his game, cause this is the best Kaapo Kakko we’ve seen in his 3 years in New York.

With that, welcome to 2022 and may this be the year the Rangers begin many many years of playoff runs!