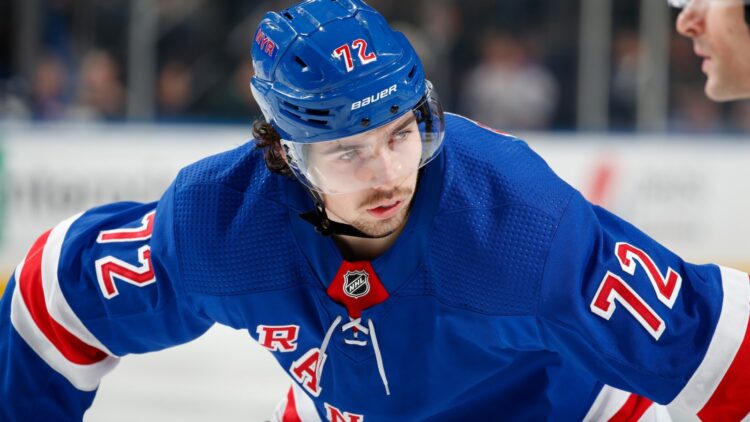 Major news broke on Wednesday afternoon that Gerard Gallant had made a surprise decision to scratch Filip Chytil ahead of that night’s eventual 3-2 win over Arizona. Greg McKegg took Chytil’s spot on the gameday roster and Barclay Goodrow was elevated to the third line center role between Alexis Lafreniere and Julien Gauthier. As is custom with these sorts of things, the head coach did not offer a clear reason for his decision.

It’s hard to believe that this is Chytil’s fifth season as a Ranger. In that time, he’s shown flashes of potential that have many fans believing that he’s Ryan Strome’s heir apparent for the Rangers’ 2C job. But despite some impressive underlying metrics (third among all Rangers in terms of individual High Danger chances this season, with 24), Chytil has failed to produce goals and points consistently – 37-41-78 in 211 career NHL games.

In the wake of this decision, a few folks from the blog engaged in a spirited debate about the young Rangers center. Is it time to be more critical of still such a young and gifted player? Will he ever fulfill his potential? Should they experiment by playing him on the wing? Here are our thoughts (lightly edited for content and clarity):

Tyler: Did I see Chytil was scratched last night? That’s wild. Where are we on Chytil? This is his fifth season already.

Rob L.: It’s a bad scratch unless there were health reasons, IMO.

Rob C.: McKegg playing over him is silly, I agree. But I also think there’s a point where we can and should be critical of Chytil.

Tyler: I think that time is now. All the raw tools are there. He’s someone who I thought could be like a 40-50 point guy at the height of his powers… 15-20 goals, 25-30 assists. But so far he just looks like he’s going to be a 3C who generates a ton of chances but cannot finish.

Rob C.: I’m starting to think they should give him an extended look on the wing, especially with this coach in this system.

Rob L.: Woah, woah, woah. My turn. He’s averaging about 1.5 points per 60 in all situations. It’s not his fault he hasn’t been given top six minutes whatsoever yet, the point totals would follow from more ice time. He may not be a shooter, but he’s also shooting under 6% this year after back to back years over 10%. As for the rest, nearly all of his underlying metrics have improved year-over-year and are above average to very good. Expectations of him taking this grand “next step” are a slippery slope because he’s done everything asked of him while being blocked at 2C by Strome for practically his whole career.

Rob C.: So why doesn’t the puck go in more when he’s on the ice? At some point, you need to see the end product, especially to justify the decision to promote him in the lineup and potentially replace one of your most valuable players. Otherwise, he’s Benoit Pouliot (different position notwithstanding). A nice player, but not one who’s a linchpin in your top six.

Tyler: He’s also not playing with bums this year. He’s playing with a first overall pick, who, granted is still trying to put it all together as well. Is it really as simple as, just give him the 2C role next year and the points will come because he’s playing with Panarin?

Rob L.: He’s still only 22. If he connects with a really good line and gets more ice time, I think he’s got a 50-point season or two in him. It’s still just very odd to me that he’s formed a line with two other players that’s been pretty damn good and he’s scratched for no discernible reason?

Rob L.: I get that, but it’s probably a line combo/chemistry issue. Chytil himself might not be a shooter, so they need to figure that out. We’ve also all spent a lot of time lately defending Zibanejad’s poor results because of bad shooting luck.

Becky: I love Chytil, but comparing him to Mika is a little silly. Mika has had multiple seasons where he’s been a point-per-game player. Chytil doesn’t have that track record.

Rob C.: What about trying him on the wing, especially while Panarin is out? The dude scored a hat trick during the pre-season by ripping one-timers from the off-wing. I think he is a shooter, they’re just not giving him a chance to showcase that skill.

Rob L.: While I’ve been against that because center depth is more important at this point, sure, why the hell not? The team has been stagnant lately in terms of 5v5 offense, so they should be trying different things.

Tyler: Is there a player you would give up Chytil in a trade for? Kevin Fiala or Filip Forsberg maybe?

Rob L.: I’m not sure, but that decision is really more related to Strome. I believe Chytil could handle the 2C role, so the key is backfilling the 3C in a competent manner. And not necessarily with Morgan Barron; I want somebody established.

Becky: Fil has also been plagued by playing well and then getting injured as soon as he gets on a run. He’s been really unlucky with that, and I’m not ready to give up on him yet.

Dave: I’m in both camps. You want to see more production, but he’s not getting even strength minutes, he’s not getting PP1 minutes, and his SH% is half of his career average. I’d love to see him get an extended look with Panarin and see how that goes.

Rob C.: Either way, I think we can all agree on this: Greg McKegg is not the answer!

Where do you stand on the decision to scratch Filip Chytil, and what do you think his future holds? Continue the discussion in the comments (in a civil manner, of course)!