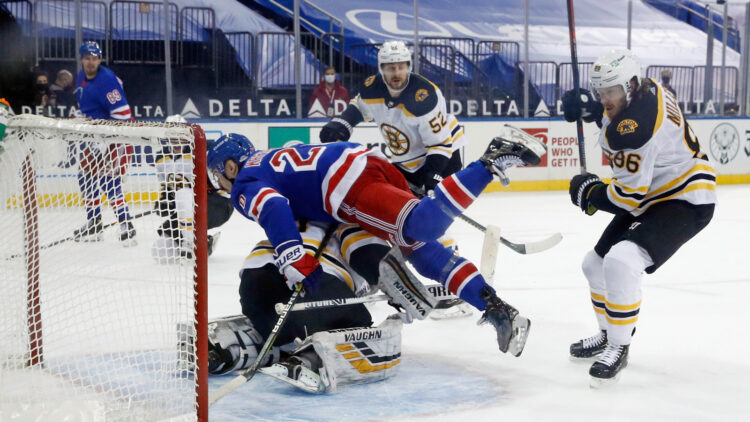 The Black Friday Rangers goal breakdown finally includes a win. It seems like the Rangers have always been outplayed on Black Friday, rarely getting a win against the Bruins. This time around, they weathered the early storm from the Bruins before taking it to them in the second. It was still a game mostly controlled by Boston, but the Rangers weren’t crushed either.

Julien Gauthier had himself a third period, almost singlehandedly giving the Rangers a two goal cushion late in the third. Igor Shesterkin did everything he needed to do as well, making stellar saves when the Rangers needed him to, both keeping them in it and preserving a lead.

Oh, and Chris Kreider almost scored on the Michigan.

The #NYR give up too much time and space to Smith in a quality area of the ice. It's been a weakness through the first quarter of the season. pic.twitter.com/ooFakq6fmT

Jacob Trouba couldn’t clear, gave it to Craig Smith. Picked the corner. Not much Shesterkin could do here. Maybe the Rangers could have helped him out by not taking bad penalties so early.

Rangers 1, Bruins 1 – No one watches Strome

In the final seconds of the first frame, Artemiy Panarin sets up Ryan Strome to tie the game 1-1. Dryden Hunt with the secondary assist #NYR pic.twitter.com/qqOU9fJNC5

Three Bruins in front, yet no one puts a body on Ryan Strome. Good on Strome to find the weak spot and give Artemiy Panarin a target to hit with the pass.

Boston wins the draw, moves the puck around, and takes a 2-1 lead thanks to Patrice Bergeron #NHLBruins pic.twitter.com/tfMWYjpJAR

The Rangers were caught puck watching after losing a defensive zone faceoff. K’Andre Miller was at the top of the circle, leaving Trouba alone to defend a pair of Bruins in front. Not much he can do there. Also, how does that original pass get through?

All of the Bruins have their backs to Dryden Hunt for the juicy rebound. No chance for Swayman.

An odd man rush for the Rangers, and Julien Gauthier showing the skill we all knew he had, taking the Strome pass from his skates to his stick. Credit to Panarin for getting position on his man and cutting to the net, giving Gauthier a target for the pass.

Gauthier to Lafrenière gives the the Rangers a 4-2 lead. Gauthier & Fox each earn their second assists of the game #NYR pic.twitter.com/HSNZJWDoyN

Julien Gauthier is having himself a revival. He blew by Charlie McAvoy to get the loose puck, and then fed Alexis Lafreniere in the slot on the rush for the beautiful nail in the coffin.

From the bench, Artemiy Panarin throws his glove at Brad Marchand #NYR pic.twitter.com/bQCkC7iI0F

Trouba empty netter. This isn’t the goal, because it was an empty netter. Instead, enjoy Panarin pelting Marchand with his glove. 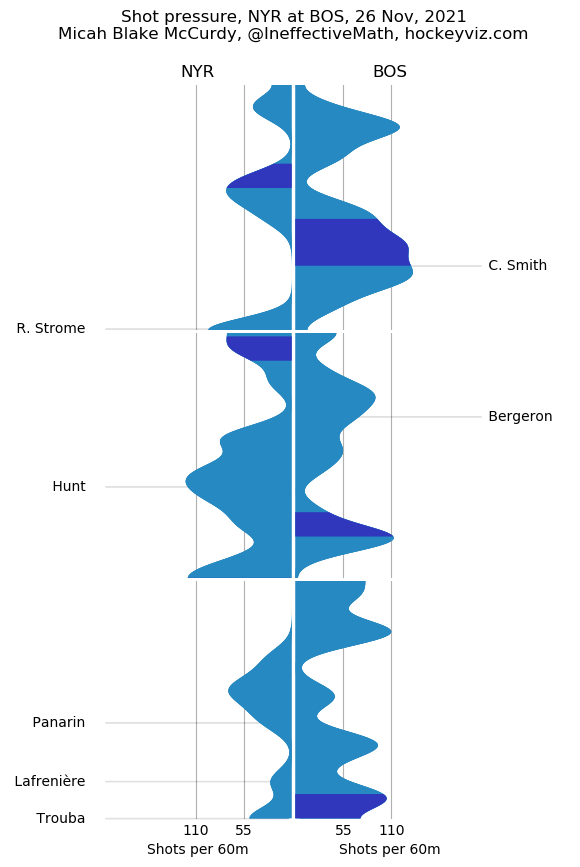 Shot Heatmap – Rangers got the quality

As mentioned above, the flow may have been for Boston, but the shot heatmap shows the Rangers got the better chances. Boston’s shots were all over the place, but not much concentration from high danger areas. The Rangers were really focused in that slot and front of the net area.

The Rangers didn’t necessarily control play throughout, but they didn’t have bad process either. They aren’t always going to dominate. They were solid though, with only a handful of mistakes. Boston controlled the majority of the play, but the Rangers capitalized when they needed to. This is a big win.