Is a Morgan Barron recall coming if both Chytil and Blais are out? 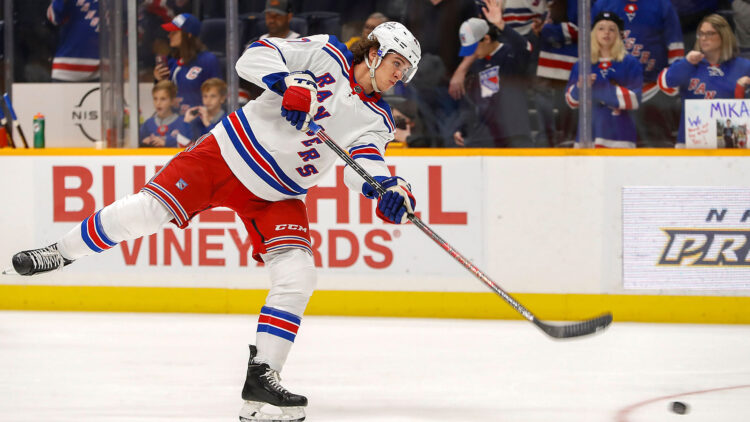 The Rangers lost another forward last night, with Sammy Blais out with what looked to be a pretty rough leg injury. That now leaves the Rangers down a pair of top nine forwards (Filip Chytil), something they struggled with when they were down Kaapo Kakko and Ryan Strome earlier this season. They don’t have the NHL depth to carry them through these injuries, and Greg McKegg isn’t the answer, and was just sent down. A Morgan Barron recall could be on the horizon.

He’s clearly part of the future

The Rangers have been reluctant to part with Barron in any trade scenarios, likely a reason why his name never really popped up in any Jack Eichel rumors. He’s been producing steadily in Hartford, and has already a quick two game call up earlier this season.

With the Rangers looking like they are turning a corner, now is the time to get a potential near-term roster player some more NHL exposure. Barron didn’t look good early on, but no one on the Rangers did. You don’t want the kid to fail, naturally, so there is no better time than the present, while the Rangers are rolling through five strong periods, than to get him that second look.

They need an actual depth center

All due respect to the McKegger, but he’s not a long term answer at center, even in the case of an injury stopgap. Barclay Goodrow, who can fill in at center, has been downright bad at the position since taking over for Chytil as the 3C. A grain of salt is required, since every single Ranger was bad, but Goodrow didn’t post an xGF% over 31% in that span until last night. That’s not an indictment of Goodrow, who again was just as bad as all the other Rangers, but center is not his thing. He’s a fill in, not a multi-game solution.

Given the hate Goodrow already gets because of the contract Chris Drury gave him, putting him in a position to succeed probably makes the most sense right now. 3C isn’t it. Thus, Barron, who is a natural center and currently playing the position well in Hartford, is their best bet. As the Rangers start to turn the corner, they will want to ensure they still dress the best possible roster.

Does a Morgan Barron recall make sense if Chytil is healthy?

That is the $64,000 question. Chytil will give the Rangers 12 healthy forwards, and more importantly, four healthy centers. If that is the case, then I can see logic behind letting Barron continue to grow in Hartford. But there are no reports that Chytil is ready to return to the lineup. He skated for an hour on his own yesterday, but that’s it. He’s close, but may not be ready in time for tomorrow’s quick turnaround.

However, and I do like to stir the pot, there have been a lot of questions about Chytil as a center. I disagree with them, and think Chytil is a good middle six center, but if the Rangers coaching staff wants to shake things up, then could they go with Barron as the 3C and move Chytil to the wing?

A Morgan Barron recall wouldn’t be the most outrageous thing either, as he is definitely next in line if the Rangers need a center. The relative reluctance to recall him is a bit surprising, but understandable given how the team looked early on.

This post may likely be outdated within an hour of it being posted, as a Morgan Barron recall may already be shot down with Chytil’s pending return. We shall see, but it does seem to be a matter of time before Barron gets another shot, hopefully more than two games, at the NHL level.