6 Rangers penalties sink them in overtime 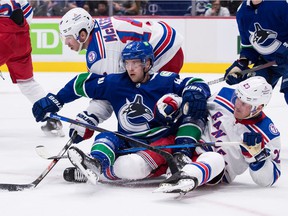 I think there is enough sample size for this now to be said, the Rangers penalties are a problem. While their PK% might be at the upper tiers of the league, that is in large part to who is in goal for them right now. The Rangers gave the Canucks six power plays last night. We can bitch and moan about the officiating, but if you watch, all six of the Rangers penalties were not grey. They were obvious infractions that have to be called. I am all for aggressive hockey, but talk about killing game flow than trading power play opportunities and blocking shots increasing chance of injury. Even Adam Fox took two himself last night, which is very unlike him. Keep the game as much as you can at even strength and keep on rolling.

As for the two goals tonight, it is finally nice to see Zibanejad and Panarin make it into the goal column. By eye test standards, both guys have looked off through ten games despite how much they wind up on the scoresheet. Last night for the both of them, I thought they had a terrific game. Panarin in particular was excellent last night, he was just robbed countless times by brilliant goaltending by Thatcher Demko.

Demko–I might add–is absolutely that dude for Vancouver, what a fun goaltender to watch. Like pitchers duels in baseball, I normally find these types of “goalie games” to be really hard to watch, but the types of saves both goalies were making through 60+ minutes was chaotic and actually stellar.

Lastly, when your team is in 3 on 3 OT, I will never understand throwing out a defensive specialist onto the ice. This particular game puzzled me with this when I saw Barclay Goodrow on my screen back checking a breakaway chance for JT Miller and doing who knows what defensively before JT wrapped it around the net and tucked it home. Dear NHL coaches, stop galaxy braining OT. Run out your offensive guns and go for the win. No Kakko or Lafrenière in OT when those are your future players on the wing makes no sense. All that open ice, give them an opportunity.

Next up, Connor McDavid, a guy you can’t give powerplay opportunities to. The Rangers penalties need to stop.