Rusty Rangers dig their own graves in Washington 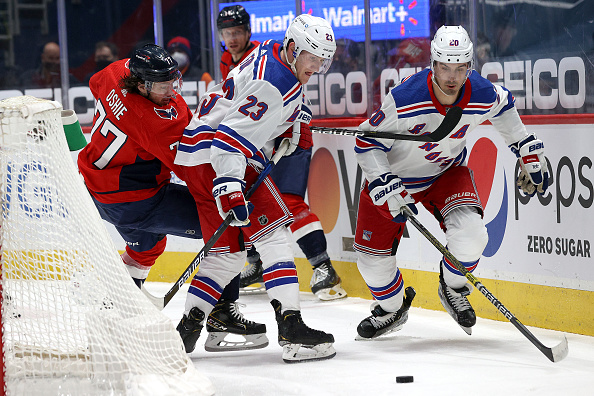 WASHINGTON, DC – MARCH 28: T.J. Oshie #77 of the Washington Capitals goes after the puck against Adam Fox #23 and Chris Kreider #20 of the New York Rangers in the second period at Capital One Arena on March 28, 2021 in Washington, DC. (Photo by Rob Carr/Getty Images)

The Rangers looked rusty offensively and on the penalty kill last night, but looked better overall than last year. Opening with this is important, as the Rangers still got shutout in a game that was much closer than the score might suggest. The Rangers had much more structure at even strength, playing a consistent 2-1-2 forecheck with neutral zone and blue line pressure.

That said, the Rangers dug their own graves last night by taking too many penalties. Not only is Washington’s powerplay good, but the Rangers were just atrocious on the penalty kill. They allowed three powerplay goals, two scored by their own guys. It was that second powerplay goal against that opened the floodgates as well.

This is to be expected from a team with a new coach and new systems. On the bright side, they looked much better at even strength than last year.

Also, no fights at all?

The Rangers allowed the dreaded double cross ice pass on the penalty kill, and it wound up in their net. The TNT replay did a good job recognizing Kaapo Kakko’s stick position on the PK, as it wasn’t on the ice blocking the first pass across to Alex Ovechkin. Kakko’s 74 seconds of prior PK experience was showing.

You can only give the Caps so many powerplays. This time, it was a Justin Schultz one timer from up top that Mika Zibanejad deflected over Alex Georgiev.

Lapierre scores his first NHL goal to give the Capitals a 3-0 lead #AllCaps pic.twitter.com/ly9TQhviDK

Patrik Nemeth pinched, and Artemiy Panarin couldn’t hold the zone, leading to a 2-on-1 against Jarred Tinordi. Nemeth pinched to try to get the goal back. Not much else to it, and it isn’t necessarily a defensive break down. It’s just a hockey play that didn’t work in their favor.

We can chalk this one up to bad luck, but you can’t keep giving the Caps powerplays. Alex Ovechkin capitalized off the multiple deflections.

Chris Kreider on the power play gets the #NYR on the board ~midway through the 3rd pic.twitter.com/6y7As6OBOV

Chris Kreider, who, along with the rest of the first line, was absent for most of this game, proved why he is the best net front presence in the NHL. A quick shift from the screen to an open deflection position, and just had to leave his stick on the ice for the deflection off Ryan Strome’s feed.

Alex Ovechkin scores his second of the game, goal number 732, moving ahead of Marcel Dionne on the all time list. pic.twitter.com/zmXurlj5lL

Evgeny Kuznetsov took advantage of rink knowledge and a second year defenseman in K’Andre Miller. He placed the puck in the corner, which gave a fortuitous bounce. Ovechkin’s burst of speed, knowing the set play, burned Miller, then deked around Georgiev.

Shot Heatmap – Evenish at even strength

Believe it or not, this game was much closer at even strength than you might think. The Rangers controlled the quality in the first period, before it fell apart in the second. Then the Caps clamped down in the third. A less rusty offense for the Rangers, and this game looks different.

Again, you would think this game was closer if just looking at the heatmap and the skater results. This game was won on special teams.

A few thoughts on this one:

It’s ok. The Rangers didn’t dress their full roster last night. It is my belief that the roster tonight will be the roster to expect in the short term as the Rangers get the season started. That includes Igor Shesterkin in net, and Nils Lundkvist in the lineup over Tinordi. Hopefully the offense is less rusty for the Rangers tonight.