Who is Sammy Blais and what does he bring to the Rangers? 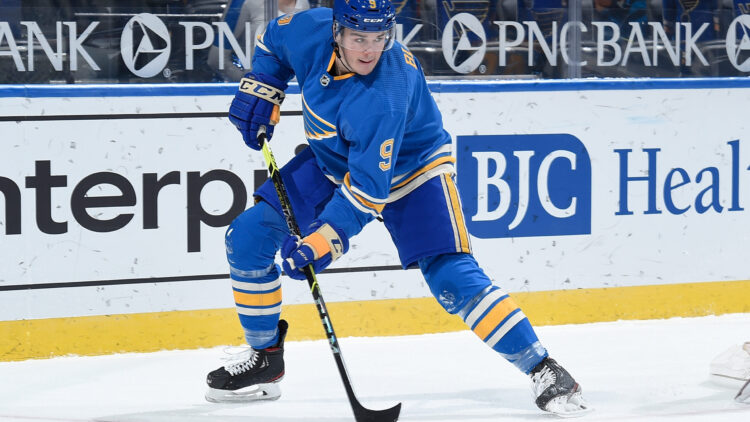 ST. LOUIS, MO – FEBRUARY 6: Sammy Blais #9 of the St. Louis Blues in action against the Arizona Coyotes at Enterprise Center on February 6, 2021 at the Enterprise Center in St. Louis, Missouri. (Photo by Joe Puetz/NHLI via Getty Images)

When the Rangers sent Pavel Buchnevich to the St. Louis Blues for pennies on the dollar, there was general outrage across the board. Not so much that Buchnevich was traded, as we can certainly understand the reasons, even if it’s tough to agree with some of them right now. However it was the return that was an issue, as the Rangers gave up their top RW for a 2nd round pick and Sammy Blais. Blais will have a tough road ahead of him, drawing the ire of a significant portion of the fan base following this trade. None of that is his fault, of course, he was just told to come to New York. But now we’ve hit that point were we can assess what Sammy Blais brings to the lineup, or at least what the scouting reports and videos say he brings to the lineup.

The first thing that catches our eyes is the offensive output here, with limited defense. Blais appears to be able to be a passenger on a good line, able to keep pace and put himself in good scoring positions. There was a significant spike in xGAR last year, giving us optimists something to cling to as he joins the Rangers. That suggests he started to be able to drive play on his own, and not just be a passenger. That’s good, especially with the Rangers likely needing additional scoring in the bottom six.

The concern is the limited defense on both charts. It suggests that Blais is a net-negative on defense, and a big one. His offense doesn’t balance it out either, unfortunately meaning Blais has been a net negative in his past seasons. Again though, this was with St. Louis and not the Rangers. He also didn’t really have a set line with the Blues, bouncing around the lineup. He played most of his time with Mike Hoffman, who was objectively horrible at even strength, with his saving grace being powerplay time. The concern is that Hoffman’s even strength numbers shot up in his time without Blais. In fact, all of Blais’ teammates had better xGF% numbers without Blais on the ice. That’s not good. 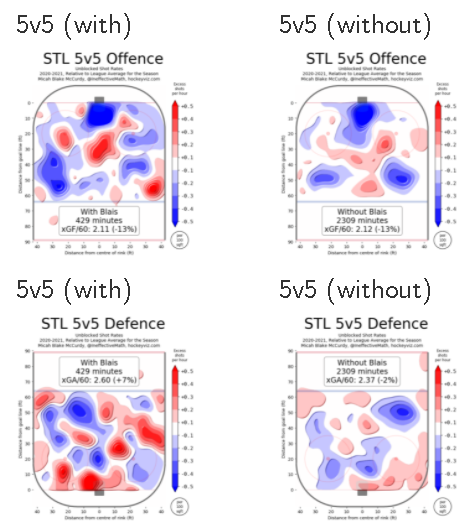 The heatmaps confirm what was discussed prior, where Blais is at least a passenger offensively and a net-negative impact defensively. I don’t know how much Craig Berube’s systems may have impacted that, but the Blues were a bit of a hot mess last year. Will Gallant’s aggressive structure play to his strengths? Will it matter?

In St. Louis, Blais was a fourth line scorer. Given the expected emphasis on roles within the Rangers, we can expect Blais will be rotating on the fourth line when the Rangers need a little extra scoring punch.

While this is just one goal, I want to point out that Blais used his size and physicality to generate separation in front. He then used his quick hands to draw Tarasenko’s pass and roof it in close. That’s three solid skills that you need to generate offense in a depth position. Now Blais won’t have Tarasenko feeding him passes, but it shows he can help create offense.

This is another goal where Blais shows his offensive skills. The big winger cuts to the slot to get a good chance, then tracks his own rebound and roofs the backhand. The goal itself is a bad goal to let up from that angle, but it still shows a nose for the center of the ice and an ability to use his hands and size to generate space. What I didn’t like to see is Blais coasting on the backcheck. He wasn’t even in frame until the goalie interference and the chaos as the Blues turned it up the ice.

One more goal here to use, and again showcases Blais’ shot, which is good. This is a more recent goal than the second goal above, and it’s good to see Blais in on the back check and creating the rush up the ice. He also trails the play and finds the open ice. He changes the angle on the shot before using the defenseman as a screen.

There’s hope for Blais as a big winger with solid offensive senses and a good shot. He could be a guy that, even though he’s 25, takes a big step forward with the right coach. It’s also worth noting that last season he was dealing with COVID, and we’ve seen what that does to players. The concern is on the defensive side of things, as he’s not strong in that area. The scouting reports on Sammy Blais back this up, in addition to the stats and the video.

The best case scenario is that Blais turns into a solid depth scorer and rounds out his overall game to be a net-positive on the ice. The worst case scenario is that last season’s xGAR improvement was a blip, and Blais continues to struggle defensively without any offense to show for it. This is where trust in Gerard Gallant is needed. There’s reason to be hopeful, but also reason for caution.