The 2021 NHL Draft order is set, for now. Barring any trades, the NY Rangers will be selecting #15 overall. While the 2021 Draft is deemed “weaker” than the 2020 and 2022 drafts, it is still a draft with solid players available. The Rangers actually have a good situation, where they aren’t picking in the top-ten in this draft. There will be many options at #15, and the scouting report on Fyodor Svechkov is a solid play two-way winger with offensive upside.

Svechkov is one of the better defensive players in the draft, which is a little rare at such a young age. Naturally, he plays a very smart game and sees the ice well. His aggression on defense and anticipation helps him create turnovers and transition the play the other way. He’s also a pretty decent skater, at least within his straight-line speed. That trio of skills makes him a smart player who, as long as he progresses, will at least make it as a bottom-six forward.

But don’t read that as Svechkov can’t score. He has solid hands, and his vision allows him to see the offensive zone well. He’s one of the better transition forwards in the draft as well, able to pass or carry the puck out of the defensive zone and through the neutral zone. Sometimes that skill doesn’t show up on the score sheet, but it is a critical skill set for success.

One of the knocks on Svechkov is that he lacks any standout offensive skill. He is a bit of a playmaker, which makes sense given his hockey IQ, but he rushes shots and forces passes a little too often. His shot also isn’t a strength. It’s effective, but it’s certainly not at the Cole Sillinger level.

The other concern is that he’s seen as the “safe” pick. And we’ve seen where that gets the Rangers. There is probably a lot of Lias Andersson fear there, which is fair. However they are nowhere near the same player, and Svechkov is not seen as “NHL ready” like Lias was. He’s still a project, and will need to develop his offensive skill set. 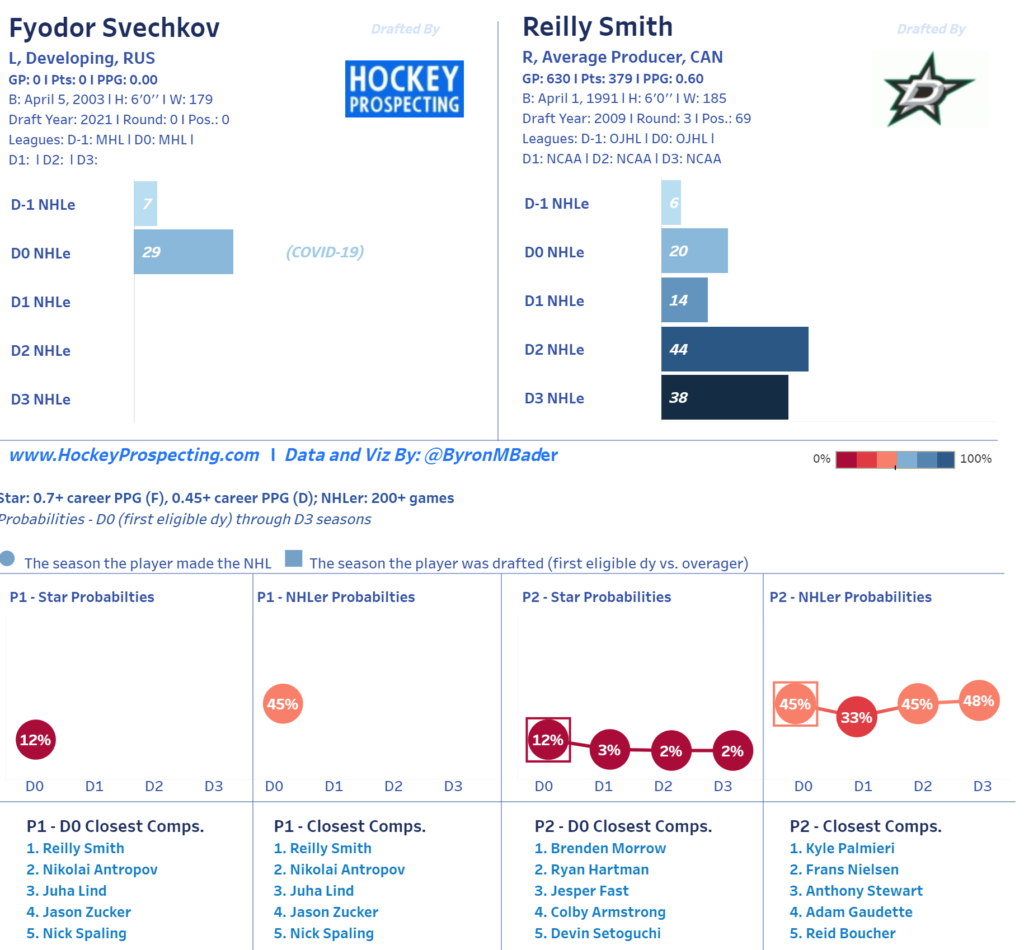 The scouting report on Fyodor Svechkov is a two-way winger, and the projects more or less show that as well. His closest comp, again COVID-19 impacts notwithstanding, is Reilly Smith, with Nik Antropov as a second. When you look at Smith, his closest comps are Brendan Morrow, Ryan Hartman, and Jesper Fast. All solid players, but none are offensive dynamos.

I don’t see the Rangers going with Svechkov at #15 if there are more offensive players available. That doesn’t mean Svechkov is a bad pick, it’s that he’s more of a safer pick with the potential to be a great two way guy. Safe can be death though, as the Rangers have learned.