The 2021 NHL Draft order is set, for now. Barring any trades, the NY Rangers will be selecting #15 overall. While the 2021 Draft is deemed “weaker” than the 2020 and 2022 drafts, it is still a draft with solid players available. The Rangers actually have a good situation, where they aren’t picking in the top-ten in this draft. There will be many options at #15, and the scouting report on Chaz Lucius is another kid with an eye for the net and scoring goals. Bonus: He has one of the best names in the draft too.

Chaz Lucius had a bit of an odd year, but so did everyone due to COVID. There are a few pure goal scorers in the draft, and Lucius is another one in the mold of Cole Sillinger and Mason McTavish. In his 2019-2020 season with the US National Team (Juniors), Lucius put up a line of 31-19-50 in 46 games in the USHL. He has great accuracy and power with all his different shot selections, changing angles regularly to fool goalies.

As with any goal scorer who can quickly change angles on a goalie, Lucius has great hands and stick handling ability. He also has a nose for the net, finding open ice and putting himself in a position to score on zone entries. He’s not afraid to get to the dirty areas, but he will need to fill out a bit to be successful against bigger opponents. That’s normal for an 18 year old, though.

One of the concerns with Lucius is hi skating. If you watch the highlights, he’s not very fluid. His legs move very quickly but he’s not going very fast. This isn’t necessarily a huge issue, as proper development and skating coaching will correct this, but it is something that can keep him from reaching his potential if it isn’t focused on.

Another area to watch is his defensive game, which is the go-to concern for every teenager. He can get too involved in the offensive game and get caught puck watching on defense. Again, normal stuff that usually works itself out with proper coaching. 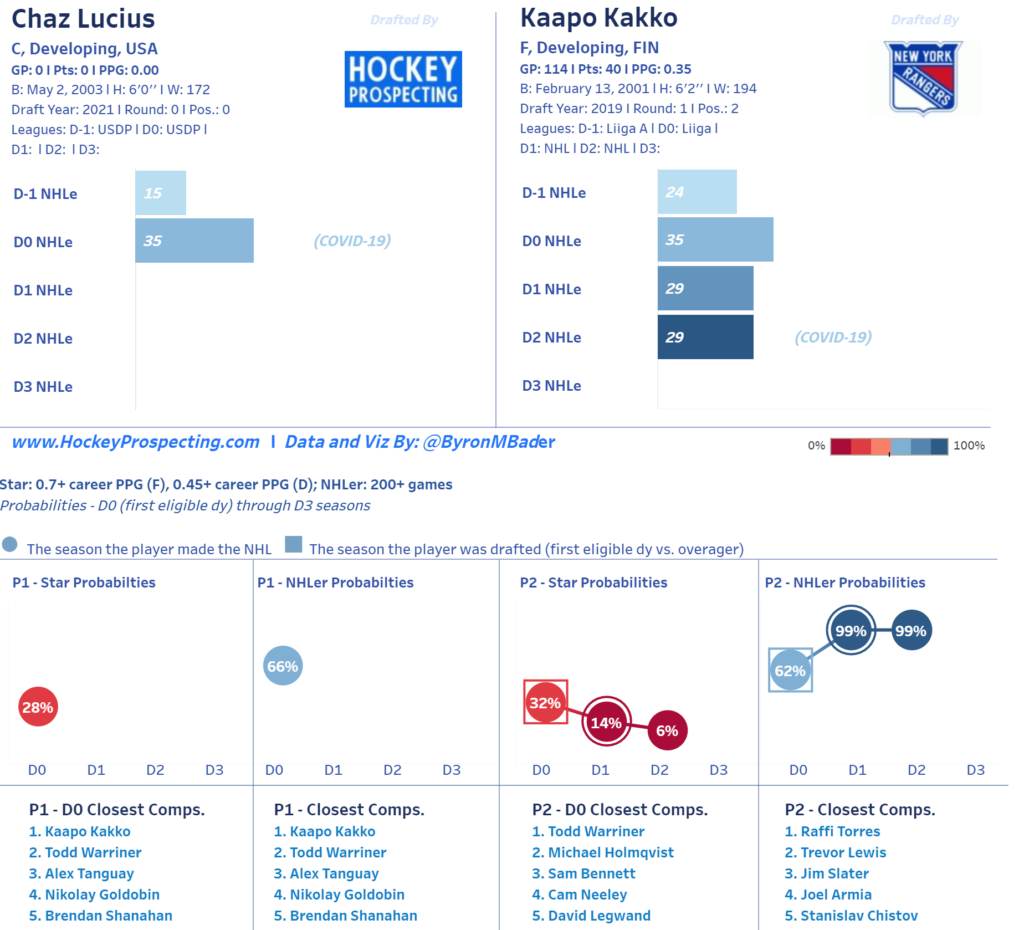 Interesting enough, Lucius has a similar pre-draft profile to Kaapo Kakko. Now again, anything statistical this year is to be taken with a grain of salt due to COVID. Kakko might not be the best comparison for Ranger fans, given some of the emotional outbursts calling him a bust already. There’s no denying his skill set, and if Lucius hits that career path –remember that Kakko’s season last year was a complete 180 and a solid sophomore season– then he will be a fine NHLer.

The Rangers could be choosing between a trio of snipers at #15. All three of Chaz Lucius, Cole Sillinger, and Mason McTavish are worth the selection at #15, at least based on their scouting reports.