The 2021 NHL Draft order is set, for now. Barring any trades, the NY Rangers will be selecting #15 overall. While the 2021 Draft is deemed “weaker” than the 2020 and 2022 drafts, it is still a draft with solid players available. The Rangers actually have a good situation, where they aren’t picking in the top-ten in this draft. There will be many options at #15, and the scouting report on Aatu Raty shows a gifted playmaker that needs time to hit his ceiling, but could be worth it.

Whereas Cole Sillinger is a pure sniper, Aatu Raty, aside from having a fantastic name, is more of a playmaker with great vision. He has slick hands that do manage to keep up with his feet and eyes, and makes him difficult to steal the puck from. He’s great at buying time for his teammates and then creating something from nothing.

Just because he prefers to set up his teammates, it doesn’t mean Raty can’t also put the puck in the net. His slick hands play into a quick release and deceptive shot. When mentioning his hands, it’s also important to remember that footwork matters. His hands certainly keep up with his feet, and vice versa. He’s just very shifty on the ice.

Defensively, Raty is certainly a product of Finland. He plays a great two-way game, is sound positionally, and for the old time hockey folks, likes to throw the body around a bit. He’s a grinder with some great skill. It’s a great dual skill set to have.

There are three things to keep in mind with Raty. First is that while he’s very good on his feet, his top-end speed is nothing to write home about. He will get better there though.

Second, he does seem to play more of a perimeter game. This wasn’t necessarily a knock on Kaapo Kakko, but we saw how even he had to adjust to the NHL game. If Raty is a perimeter player in Liiga, then he’s going to have an even tougher time than Kakko to adjust. Those extra seconds disappear very fast.

Third, like most players in this draft, is that Raty is a project. He had a bit of a tough 2020-2021 season, mostly due to COVID impacts. That’s true for everyone though. He’s not making the jump to the NHL for a while. 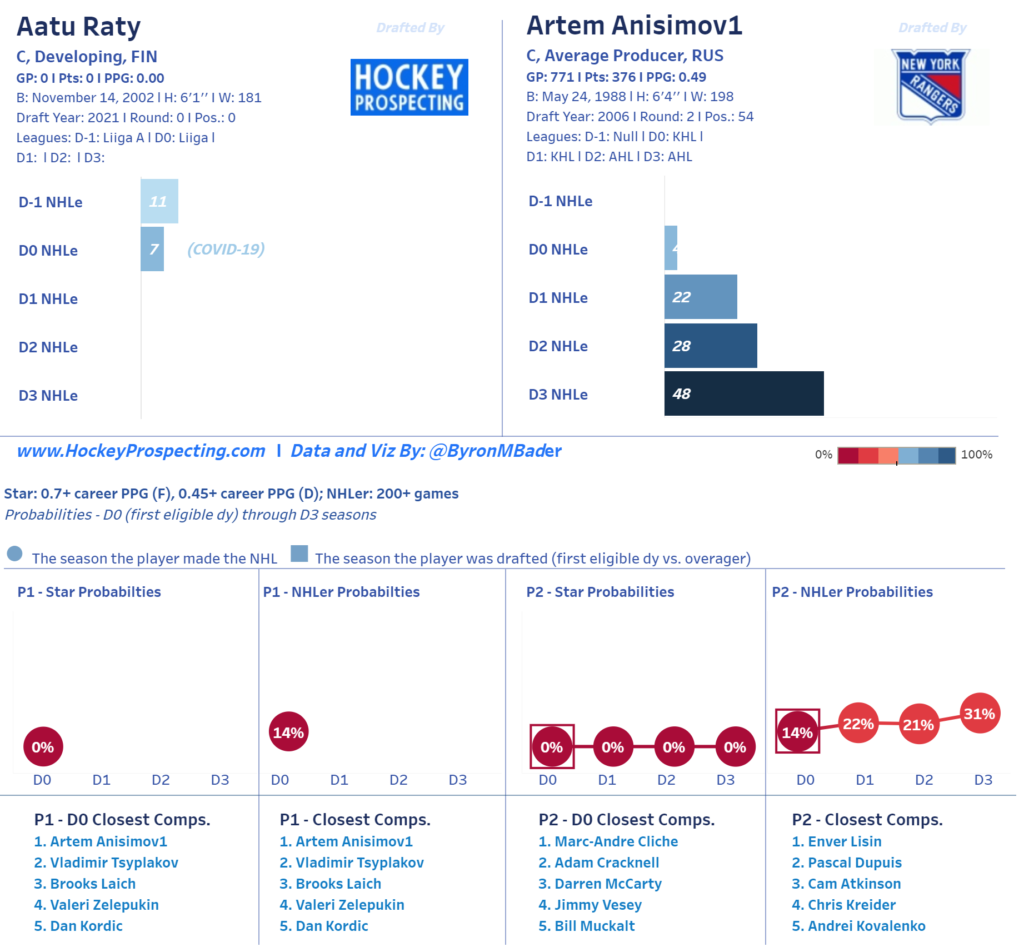 This is a new feature that I signed up for, and if you’re looking for a good way to dive deeper into prospect analytics, Byron Bader’s Hockey Prospecting tool is the best one to go with.

Raty compares similarly to Artem Anisimov, who was a pretty decent top-nine center in his prime. But again with all 2021 draftees, there’s a grain of salt needed. The above shows regression by Raty heading into the draft, but there were major COVID impacts to his season. There’s certainly an argument to be made that Raty could be tremendously undervalued.

Prior scouting reports on Aatu Raty had him ranked much higher in the draft. That’s what one year does, and there’s great value here.