Chris Kreider started the season with a new contract that more or less split the fanbase down the middle. His contract pays him $6.5 million per season, so people expect him to produce to that contract. That’s far, but it’s also tough since “produce to the contract” is fairly subjective. This year, Kreider put up 20-10-30 in 50 games, good for a 33-16-48 over an 82 game season. Kreider also missed the last six games of the season. Quantifying realistic expectations versus reality is the premise for Chris Kreider’s report card this season. That includes the concerns that most vocalize.

The rub for most on Kreider is inconsistency, in that he “spends too many games in a row invisible.” Breaking this down a bit, let’s check this year’s game log for scoreless runs this season. Given that Kreider isn’t Artemi Panarin, let’s focus on runs of 3+ games without a point.

So there are two such streaks where Kreider went three or more games without a point. His 20 goals were also second on the team, and 48 points fifth on the team. There are certainly valid questions about effectiveness in years 5-7 of his current deal, but this year he had a strong season.

Kreider is, bar none, the best net-front presence in the league. I don’t think I need to convince many people of this either. It’s what makes him such a critical aspect of the Rangers offense. It’s beyond points, it’s about screens and attention grabbing in front of the net. 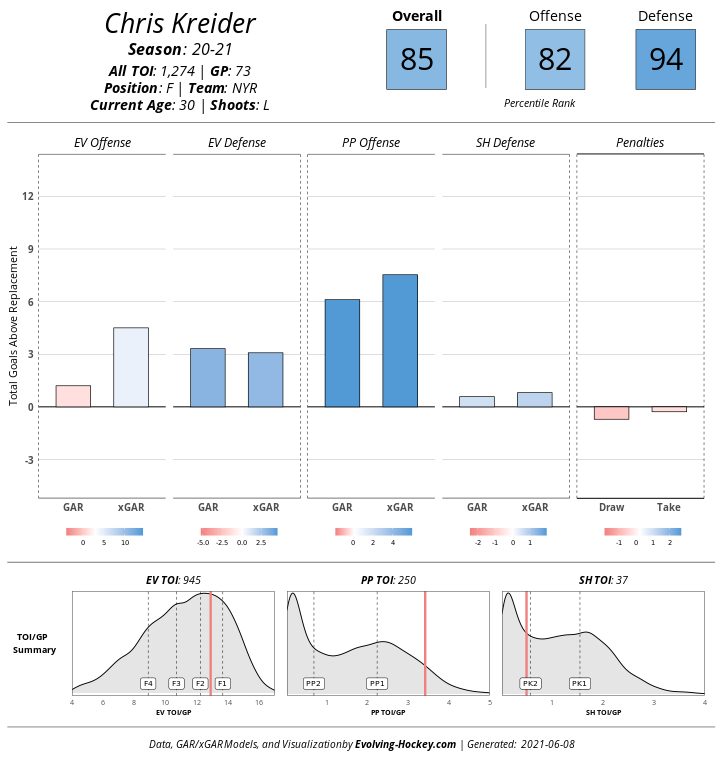 Kreider has consistently strong expected-goals/GAR metrics, and this year was no different. He is a top offensive and defensive player in the league, and certainly worthy of his top-six minutes. In fact, there’s a case that his even strength offense was negatively impacted by luck factors. Given that the Rangers had an on-ice SH% of 9.15%, the worst among regular top-six players, it checks out to a degree. 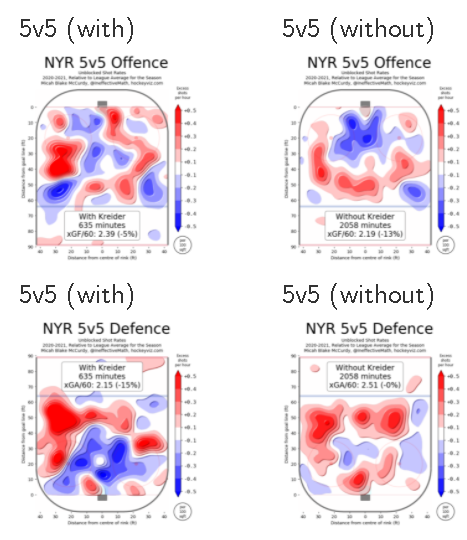 Offensively, Kreider was a net-8% positive, but there was certainly room to improve. I do find it interesting that the Rangers were actually 5% below league average in terms of xGF/60 with Kreider on the ice. They were 13% below league average without him, which shows he’s net positive, but there’s certainly room for improvement here. I didn’t notice anything glaring about his game, aside from the entire offense taking a nap in the last few weeks of the season.

Defensively, Kreider is a net 15% positive difference, and the Rangers are actually significantly better with him on the ice than off. At least defensively. This is an often overlooked aspect of his game, along with the net-front presence. 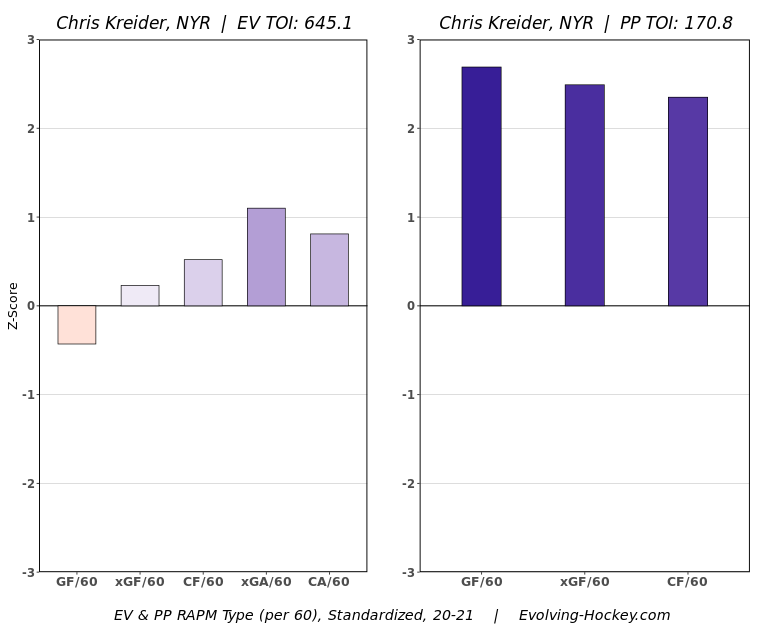 One of Kreider’s greatest strengths is on the powerplay. This again plays to his skill set as the best net-front presence in the league. Think of all the powerplay goals scored this season, and now think of how many were directly impacted by Kreider in front of the net. Not every goal was touched by Kreider, but he was impactful on most powerplays.

I am certainly intrigued to see how PP1 looks with another lefty that isn’t in front of the net, which for sure took away some overall effectiveness. We shall see what the new head coach does with Kreider and PP1 next season.

I’m sure most people aren’t going to like my report card grade for Chris Kreider this season. I think the inconsistency is largely overblown. Expecting him to score every game, or even every other game, isn’t realistic. He never was that kind of player. However he does have a net-positive impact on the ice in all three zones. He’s also the best net-front presence in the league. These are all things to consider.

Given the season impacts this year, it’s tough not to give Kreider top marks. We can question years 5-7 all we want, but this was year one.