On the Rangers center quandary 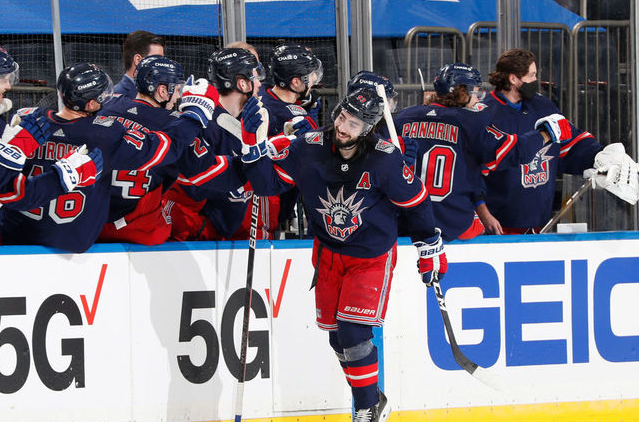 As the Rangers 2020-21 season progressed, I knew I wanted to complete a top-level analysis for centers Mika Zibanejad, Ryan Strome, and Filip Chytil. With the 2021 draft less than two months away, plenty of scenarios will be examined and proposed as to how the Rangers should handle their top three centers. While I think there are certain statistics that favor one player over another of the three, I think the best way to level set is to simply state that the Rangers have three decent to good NHL players at their disposal.

Part of the reason why I don’t spend a lot of time dabbling in trade rumors or proposals is because we don’t know how the Rangers rank Zibanejad, Strome, and Chytil. In order to realistically target another NHL-caliber center (whether by trade or UFA), we must first know who they would prefer (or intend) to keep in a Rangers uniform. They may want all three. I do not envy the decision Chris Drury and his staff must eventually make. I believe this is a somewhat significant crossroads as to how this roster will be built.

Instead of going player by player, I want to split up this analysis of the Rangers centers into offense, defense, and overall impacts. We’re also going to stick with a year-over-year POV seeing as we’re trying to get a sense of where the players have been and where they might go. And while we’re “diving in” per say, this is also meant to be more of an overview rather than an innately detailed analysis. As much as I like to find time to do this, in the end I am very much tossing darts (just like most, or all, of us). 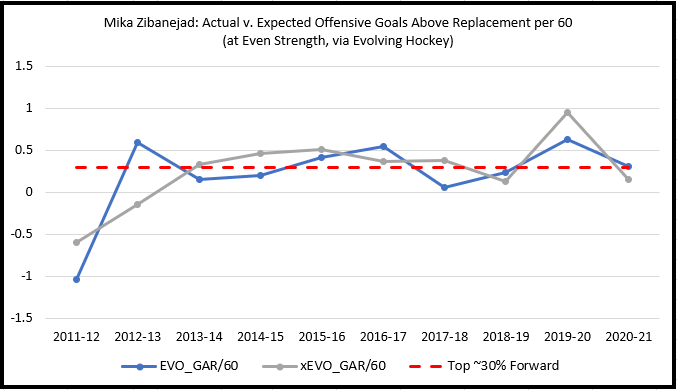 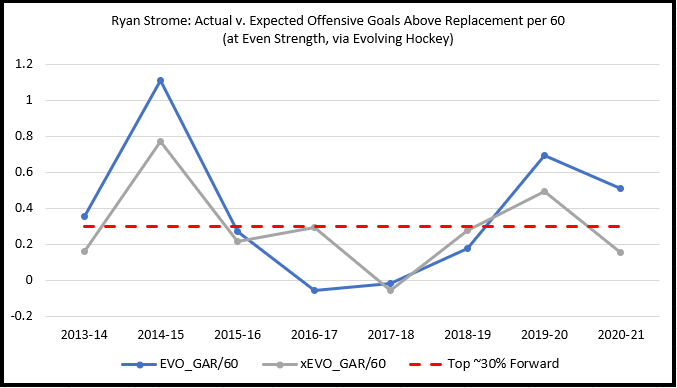 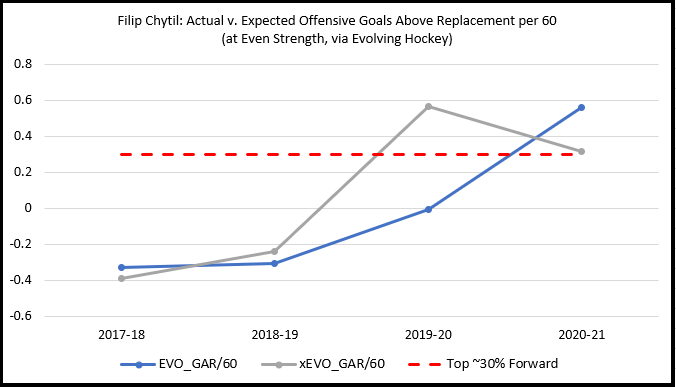 Right off the hop there are three takeaways here, one per player. For Mika, you can see that his expected and actual even strength offense GAR & xGAR has been hovering at a high level for years. This makes sense – while Mika may not completely dominate a game, he is rarely outplayed, seeing as he’s firmly a good NHL center.

Ryan Strome is also clearly a positive offensive player, but it’s the swing of the last couple of years that is more concerning rather than encouraging. For one, even if he’s “found his game” at the NHL level, given his age (to be 28 next year), this would likely indicate a peak in effectiveness. Furthermore, the gap between GAR and xGAR makes his regression risk higher.

Finally, Chytil showed more promise this year and his offensive GAR metrics support this. While it will be difficult for him to go even higher in these ratings, the fact that there’s a 22 year old playing effective hockey in the offensive zone, even in limited TOI, is reassuring. 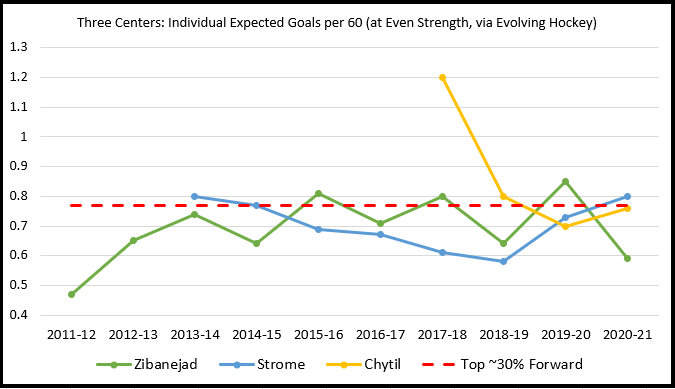 The above graph will be unique to this section, but I like to look at the iXG/60 when discussing player decisions. I believe this is one of a few simple ways to look at if a player is consistently creating chances.

In the end, the themes are the same as the GAR/xGAR charts shown previously. Zibanejad has oscillated around that top ~30% line while Strome has come on strong as of late. Chytil has started strong so it’s, again, reassuring that he has many years before reaching his peak age range. 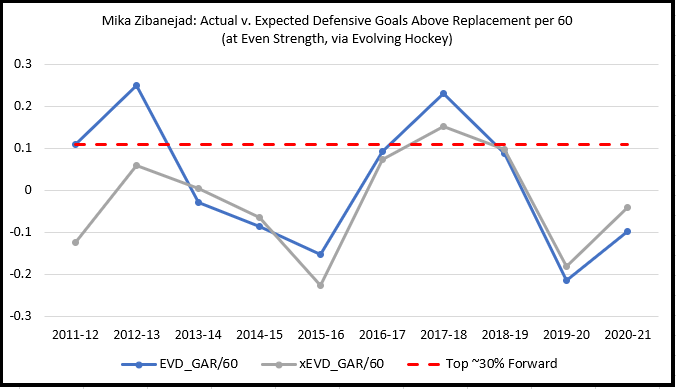 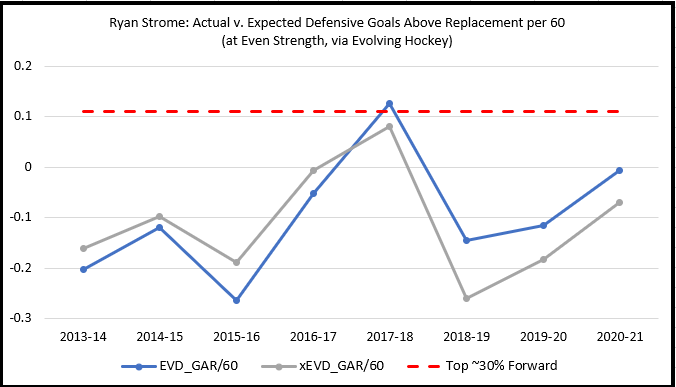 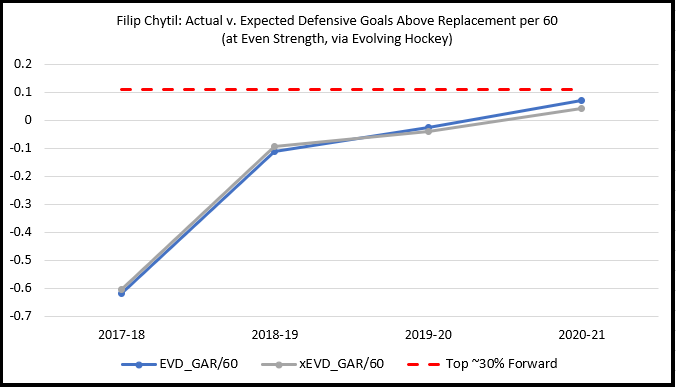 On defense is where the story of these three starts to get interesting. For Zibanejad, he has generally been an average or slightly below average defensive player in terms of GAR/xGAR at even strength. He had three strong years to start with the Rangers, but otherwise followed the team down the drain in the defensive zone. Overall, we can’t expect more than average in any given year for Mika going forward.

While Strome had one great year in his own zone, his case is a little more clear cut as he’s usually not an impact on defense in a good way. The gap between his GAR and xGAR is once again something to watch as he’s gotten a good string of on-ice SV% performances the last few years at evens.

With Chytil I am once again impressed. Tossing out his 9 game 2017-18 season and we once again have a very young NHL player holding his own in limited minutes. If Chytil can hover anywhere near that top ~30% mark defensively, he should be a fine NHL player, especially given his offensive trend thus far and the possible wingers that he may be playing with moving forward.

One item to note before the graphs: The overall numbers include other categories besides just blending the even strength offense and defense that we’ve looked at in the above. These include power play offense, short handed defense, and penalty take/draw.

There are undoubtedly players who have strong impacts on each of these sections, but the issue with breaking them out to look at individually sits with sample size. Year over year the impacts can swing wildly depending on TOI, and overall 80-85% of the typical NHL game is spent at even strength (and more so in the playoffs). There’s a reason why PP and PK specialists usually play limited TOI at even strength. 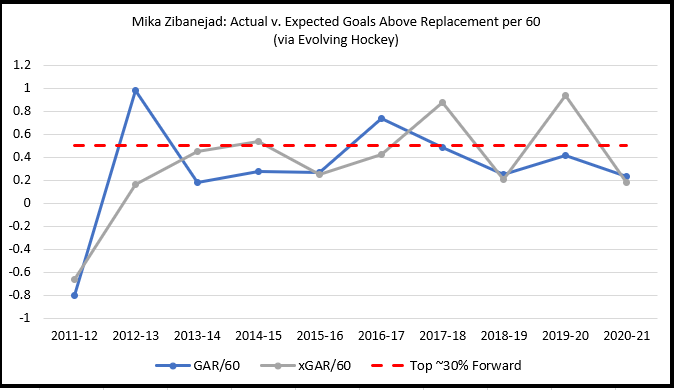 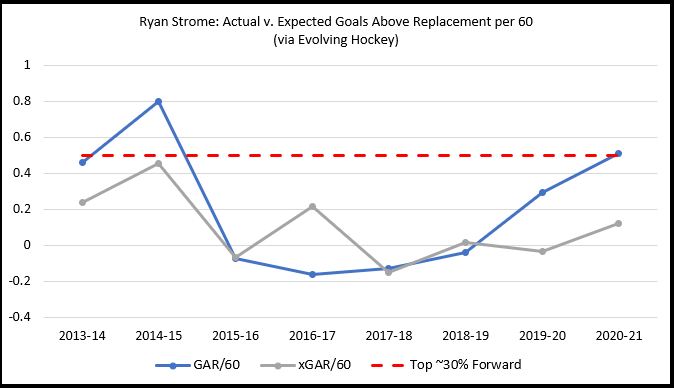 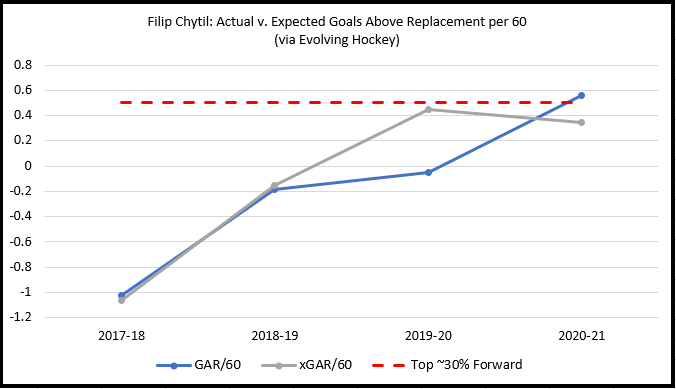 The story begins to tie together when we look at the overall GAR numbers for these three. Apart from his rookie season, Zibanejad simply hasn’t been a negative impact player regardless of the team. This is key to remember because he has established a level of play in the NHL and it is difficult to be that consistent.

Ryan Strome is a mixed bag with the overall figures. In the years where the puck is finding the net consistently, he jumps up, but when the puck luck isn’t on his side his impact is average at best. This makes sense given what we saw in his offense and defense split – where he’s consistently struggled defensively.

As with the previous two graphs, it certainly feels like young Chytil is knocking on the door of the Actually Good Forwards Club. Again, it’s in limited TOI, so no one should assume this will translate to higher TOI against higher competition, but he also will eventually deserve a larger NHL role. 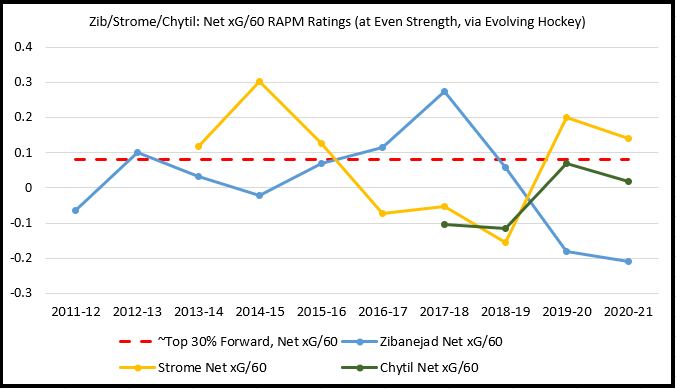 Shifting gears, I wanted to quickly look at each players RAPM Net Expected Goal per 60 rating. RAPM does more to attempt to isolate a players impact separate to the team strength. This view gives us a bit of a different story than the GAR/xGAR charts above. Zibanejad has slowly generated (whether individually or being on-ice for) less scoring chances for and more against in the past few seasons according to the RAPM model. I do wonder if, like we’re all hoping out of Kreider, that his impacts will stabilize as he eventually moves down a teams lineup with age.

Meanwhile, Strome saw a revival back to his first few years while playing in the Rangers top six the last two seasons. It should be mentioned, again, that this was mostly his offensive impacts driving this. Chytil, after a slow start, turned positive the last two years – in his case it was his defensive impacts that continually improved year over year.

The below projected contracts are courtesy of Evolving Hockey (this assumes a $81.5M salary cap). A key note: the “Pred” is shorthand for predicted, however EH offers probability percentages for each possible scenario for contract years (aka 1 or up to 8). Subsequently, a players cap hit will change, and an example of this is if the Rnagers sign Chtyil to 6-year extension this offseason, it would likely cost them in the ballpark of ~$4.3 million per year. Subscribe to them for access to this tool and many others.

Of course each players potential cap hit cannot be ignored (even though, admittedly, I think deciding on which player gives you the best chance to win is the most important factor). Evolving Hockey’s model has Zibanejad and Strome cashing in on their years of offensive output with long-term UFA contracts. Chytil, comparatively, seems cheap given that we’re seeing solid impacts at lower TOI, but in the end that is a bridge deal during his RFA years.

With all the above evidence laid out, I don’t so much have an exact plan for you but rather a few go/no-go thoughts to share. I’ll start with the one I feel most strongly about, which is to keep Filip Chytil in New York for many years to come. While he may have difficulty breaking into that top ~30% forward range (aka we don’t know his ceiling), I feel firmly that he can be a fine to very good NHL forward (middle six), especially if he has talented wingers at his side. You could see his confidence growing this season, especially before his broken collarbone.

From there my conviction on what to do wanes, but I’ll lay it out like this. I think that Mika Zibanejad has established a higher level of NHL effectiveness than Ryan Strome. At the same time, I think that Strome has had two strong seasons that are different than his previous six in the league. While some may use that as a positive I see it as an outlier risk.

This does not mean I want to extend Zibanejad long-term. I do believe that the Brassard trade comparisons from years ago make a lot of sense. The reason that worked out so nicely for the Rangers is that they took a player who was perceived as effectively at the top of his game and swapped him for a young but established player with upside. That being said, if the Rangers can’t see a way forward without one of Zibanejad or Strome, I would choose Zibanejad and do everything in my power to keep the term to four or fewer years.

This is all easier said than done. If a good deal for the Rangers is on the table for Zibanejad or Strome, it should absolutely be considered. And, to wrap this up, a wild card option that not many will throw out in the Moneyball age of asset management. Let one of them walk after next season to their UFA dollars. If Ryan Strome plays a full season next year for the Rangers, I actually think this would be a wise move, especially given his lack of production away from a certain Russian winger.

In the end that was more than 1700 words to say that I don’t exactly know what the Rangers should do with Zibanejad and Strome. Seeing as in the real life I do sales, I’m rarely willing to make conclusive statements with grey situations – it comes with the territory. All I think I know is that Chytil is showing promise, Zibanejad has proven he is a top-half center in the NHL, and Strome can certainly generate offense despite his defensive issues. What the Rangers or you do with this analysis of their centers, well, that’s your call.