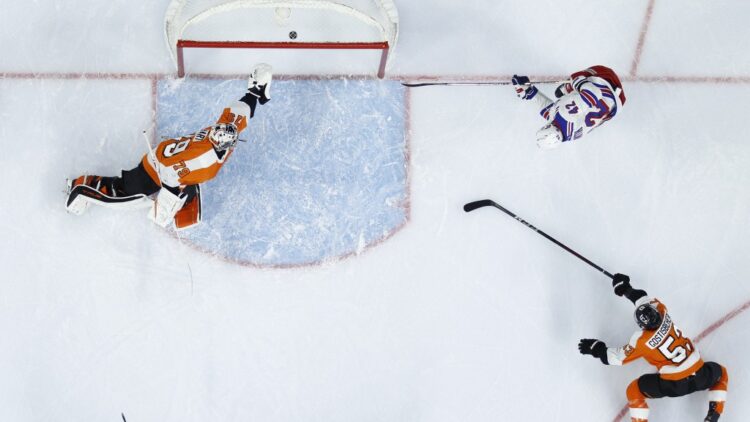 In my eyes there are two ways to grade Brendan Smith’s 2020-21 season. The first would be to just focus on this season only, and the second would be to broaden the scope to include the last few years, seeing as most everything in life is relative. Let’s do just that, starting with this past season only. 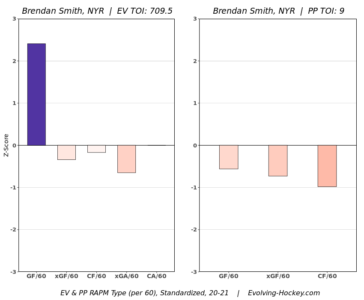 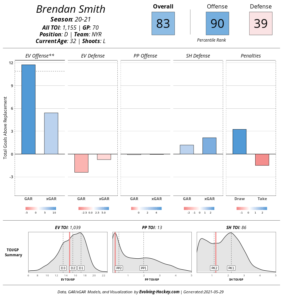 On the whole there are three main areas I’d like to highlight with Smith in 2021. The first and most obvious being his offensive impacts. You likely notice the difference between his Player Card and his RAPM card – which are two different models. GAR stands for Goals Above Replacement (the x is shorthand for Expected) and RAPM stands for Regularized Adjusted Plus-Minus. Basically GAR/xGAR is a higher-level stat for a player while RAPM isolates the players impact with less (but not completely separate) influence from teammates. Basically, Smith was on the ice for a lot of offense in 2021, but he personally did not generate a lot of shots & chances. In the end, he was a benefit of hot on-ice shooting for the year, coming in at 12.6% at EV, while his career is 7.6%.

Otherwise, the two other smaller areas are more in line with what Smith has done with his career – solid positive impacts on the Penalty Kill and drawing more penalties than he takes. That being said, these are small TOI areas for a player to have an impact, so it was mostly the luckier-than-usual offense that drove him being rated well overall.

Smith and his Rangers Journey

When Smith was re-signed by the Rangers on 6/28/17, the reaction was mostly positive as it was seen as a decent cap-hit deal for a 2nd pair defenseman who had historically contributed consistent value. When Alain Vigneault quickly broke up the Skjei-Smith pairing and his higher-TOI experiment didn’t work out with McDonagh, Smith suddenly found himself paired with Marc Staal. As a result, he was rarely getting out of his own end, as very few D-men (uhh, none really) were able to carry Staal under the Rangers lacking defensive structure. He was then placed on waivers in February 2018 and reported to Hartford for the rest of the season.

Smith was sporadically used in the 2018-19 season even while March Staal and Neal Pionk formed one of the worst pairs in the league that saw first-pair minutes for most of the year. His impacts were league average in his limited time, but still provided value on the PK & in drawing penalties. David Quinn then went full galaxy brain and thought he could be used as a winger in 2019-20, which frankly was a complete waste of time for everyone involved.

When Lindy Ruff was let go and Jacques Martin was subsequently hired, we all hoped the Rangers defense would improve, seeing as it couldn’t get much worse. That is exactly what happened and Smith, seeing mostly third pair minutes with Anthony Bitetto and Jack Johnson, thrived with more structure. Unfortunately, Quinn & Martin (and management) decided that Libor Hajek should get 40+ games to prove that he is not an NHL player, once again. Smith’s positive impact waned as the season went on while paired with Hajek. Even so, he clearly took on a leader role and the youth of the team seemingly responded to his positivity. It was a pleasure seeing him contribute given his journey. 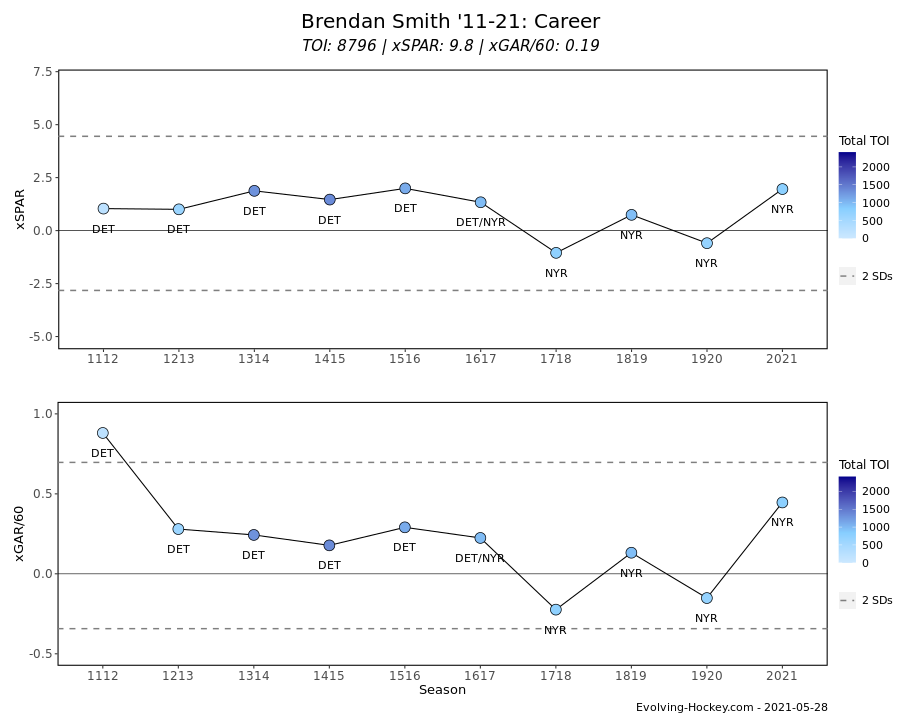 In the end I think Smith has done nothing but what he could have given the way two coaches (and management) mistreated his role and TOI with NYR. This does not mean I think he’s anything more than an aging depth defenseman in the NHL, but when compared to the options that NYR chose to use during his tenure, it’s hard to understand why he wasn’t a more consistent part of the team.

Given all of that, I grade Brendan Smith and his 2020-21 season a solid B – not showing off, but not falling behind (I know the Seinfeld joke is used with a C, but times have changed). The Brendan Smith Supporters Union has lived and learned through this journey – we shall see if we have another year to experience soon.