Other non-Eichel center targets for the Rangers

If the Rangers decide to trade for a center, and if the price on Jack Eichel is too high, then they will need to look elsewhere to fill that need. Now naturally those are two big IFs, but it seems like the Rangers will have a few other targets at center should Eichel not work out.

There is a very credible argument that holding on to Ryan Strome is the better play. However let’s also assume that Strome prices himself out of New York when his contract expires. He’s going to get a pay raise on his current $4.5 million contract, and the question is whether he is worth that raise when you combine it with his possible declining production due to age. Remember, he will be 29 for that new contract. For the Rangers, they care about the future in addition to the present.

As an aside: This is all about balancing trade cost, FA cost, and Strome’s cost. Nothing is in a vacuum. The Rangers will make the best play for the team, and that may be just hanging on to Strome. Personally I think the Rangers should explore the market with Strome, at the very least to see what he can get in a trade. They’d be irresponsible to not do so. As for the rest, well I’ve never been more “I don’t know” than this offseason. Just don’t do anything that cripples the organization.

Elias Lindholm is a name that popped up a few times in my mentions, and it’s an intriguing one. I have no idea what Calgary’s plan is, but the fact that people I trust have mentioned it to me at least makes me look deeper into it. 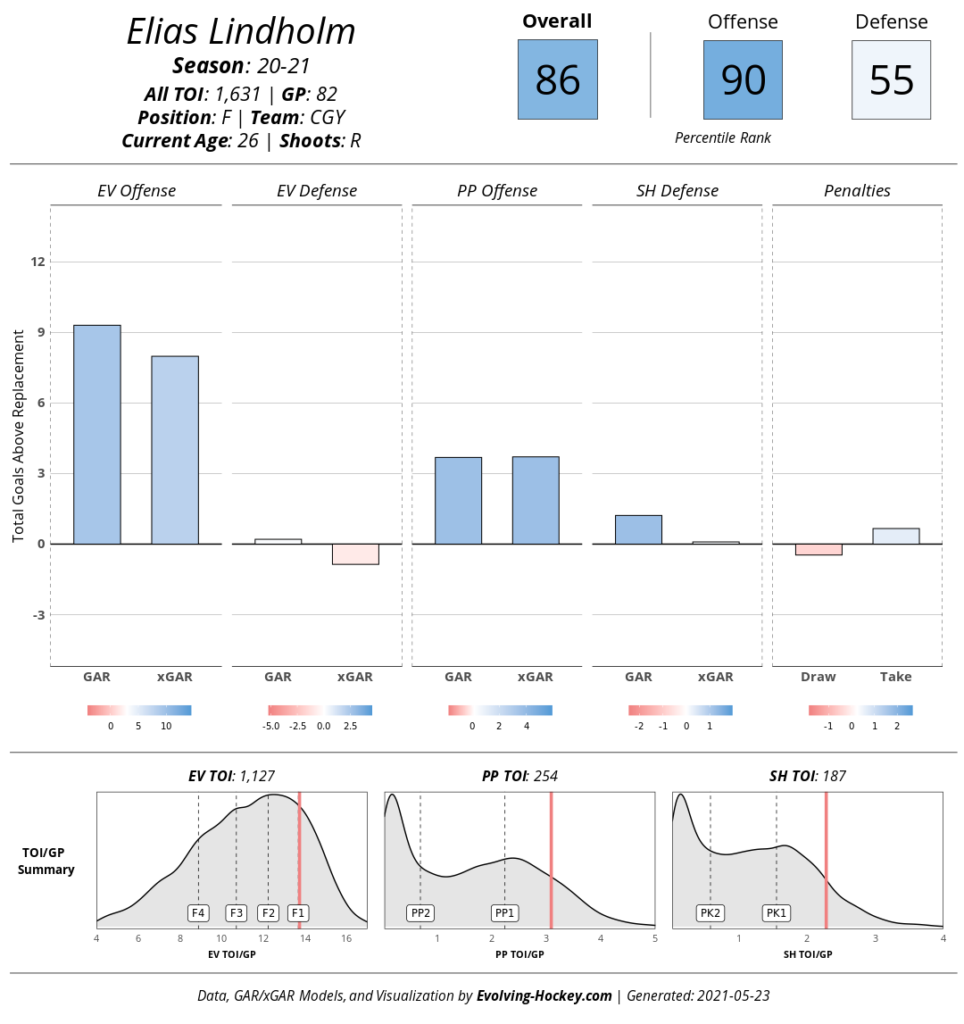 Lindholm is an a great offensive driver who at least holds his own defensively. He’s a consistent 50 point player, making him an ideal replacement if Strome is dealt. It’s more or less the same production for the same cap hit, just for a younger player for a few additional years. Also important is that Lindholm is a career 52.2% faceoff guy, something the Rangers do need to improve upon.

At 26 years old, Lindholm could be a one of the shrewd center targets for the Rangers. He’s a good three zone player, and is good on the forecheck, covering in the neutral zone, and is quick on the backcheck. That itself would make the Rangers tougher to play against. When we think grit here, we think tenacity on puck pressure, not hits. Being tougher to play against addresses the grit factor and, more importantly, gives the Rangers an identity that they’ve been lacking. Lindholm does help address that.

This is a shot in the dark, and something I’ve mentioned before as a potential prospect-for-prospect swap. The Kings are blessed with tremendous center prospect depth, but they lack defense prospect depth. The Rangers are the exact opposite. There’s a match here, albeit a long-shot.

For the Rangers, they’d look to trade from Matthew Robertson, Braden Schneider, or Nils Lundkvist. Given how Schneider and Lundkvist have looked, Robertson might be the play here. On the surface, it isn’t necessarily a straight-up trade, but Turcotte’s injuries might have impacted some of his value.

This is more of a shot in the dark than anything.

Tampa Bay needs to shed $5 million this offseason to get cap compliant. They likely won’t be able to pull the Kucherov-LTIR thing again in a full 82-game season. So something needs to give. They will try to move Tyler Johnson, and may be able to swing a trade with Seattle to take him in a trade. But if not, they will need to get more creative. 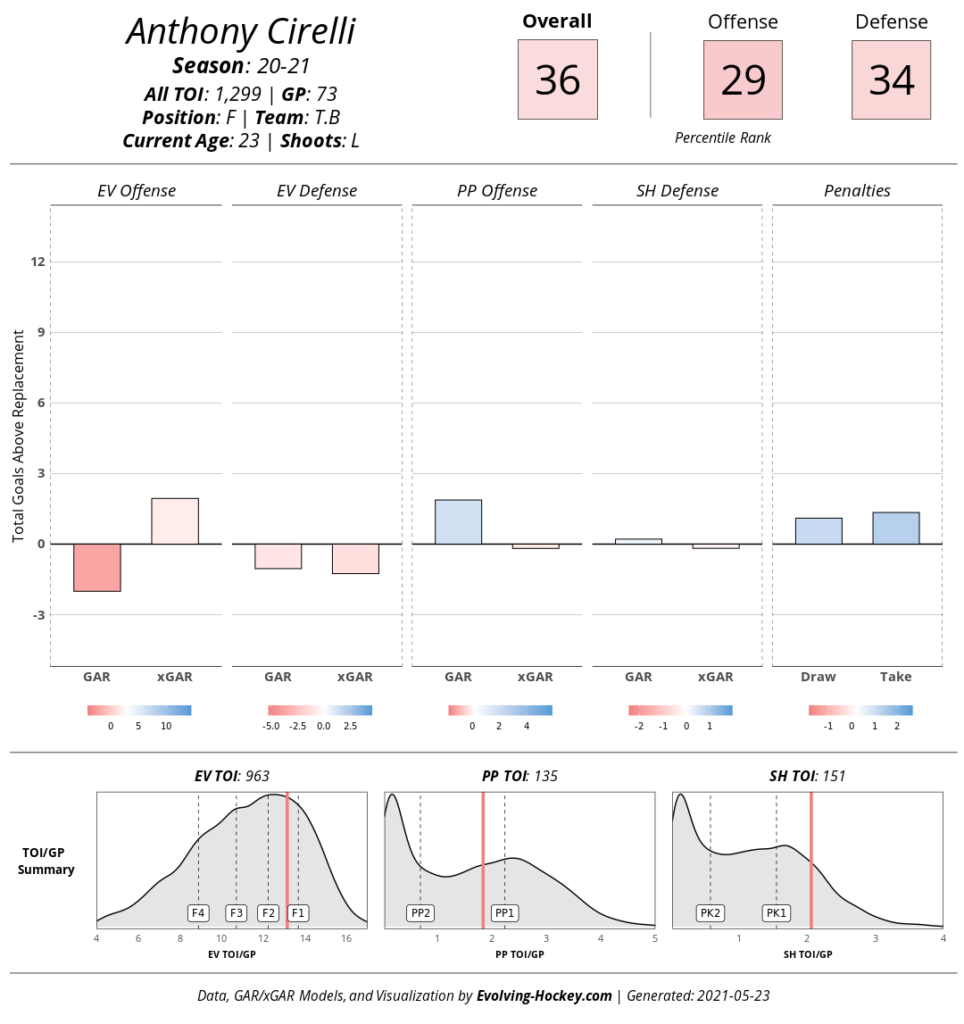 Cirelli, though, has had a rough year. He’s overall much better than this through his three-year sample. 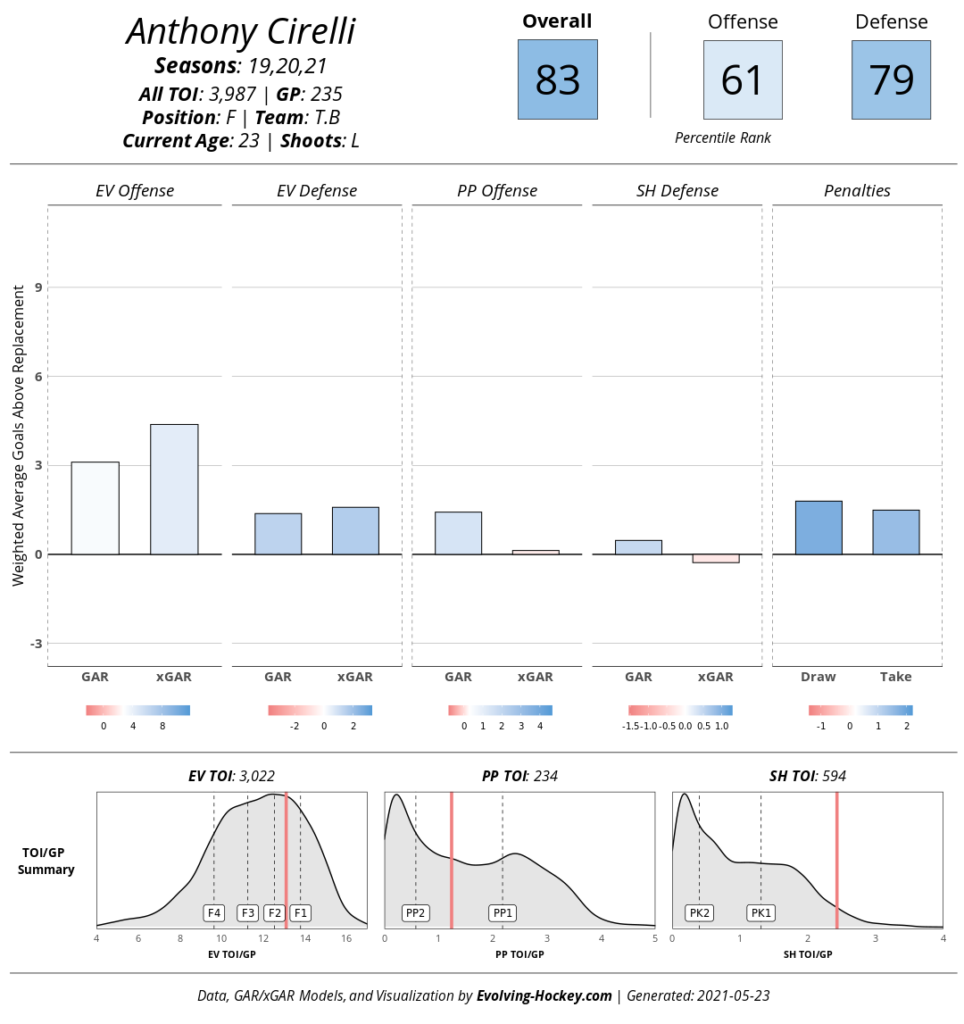 The question, if the Rangers and Tampa go this route, is always going to be cost. Cirelli is another one of those forechecking centers that gets back on defense. This, like Turcotte, is likely a longshot, as Tampa has many other options to shed salary before trading someone like Cirelli. Remember, they got a 1st round pick for JT Miller’s contract.

Nuge is the top free agent center this offseason and is projected to get a doozy of a contract. As with all 28-year-olds, the question is about longevity and ability to produce numbers worth the contract. All signs point to Nuge not being able to produce at a 60 point pace for 7 more years.

Ryan Nugent-Hopkins is a buyer-beware center target for the Rangers. With more ice time, he likely puts up decent numbers in the first few years of the deal. But after that, who knows? If the choice is Strome or Nuge, the answer is Strome.

The Isles likely aren’t going to be able to retain Casey Cizikas, or at least it likely wouldn’t be prudent to do so. Cizikas will get more than his production is worth on the open market, but that is the story with most UFAs. 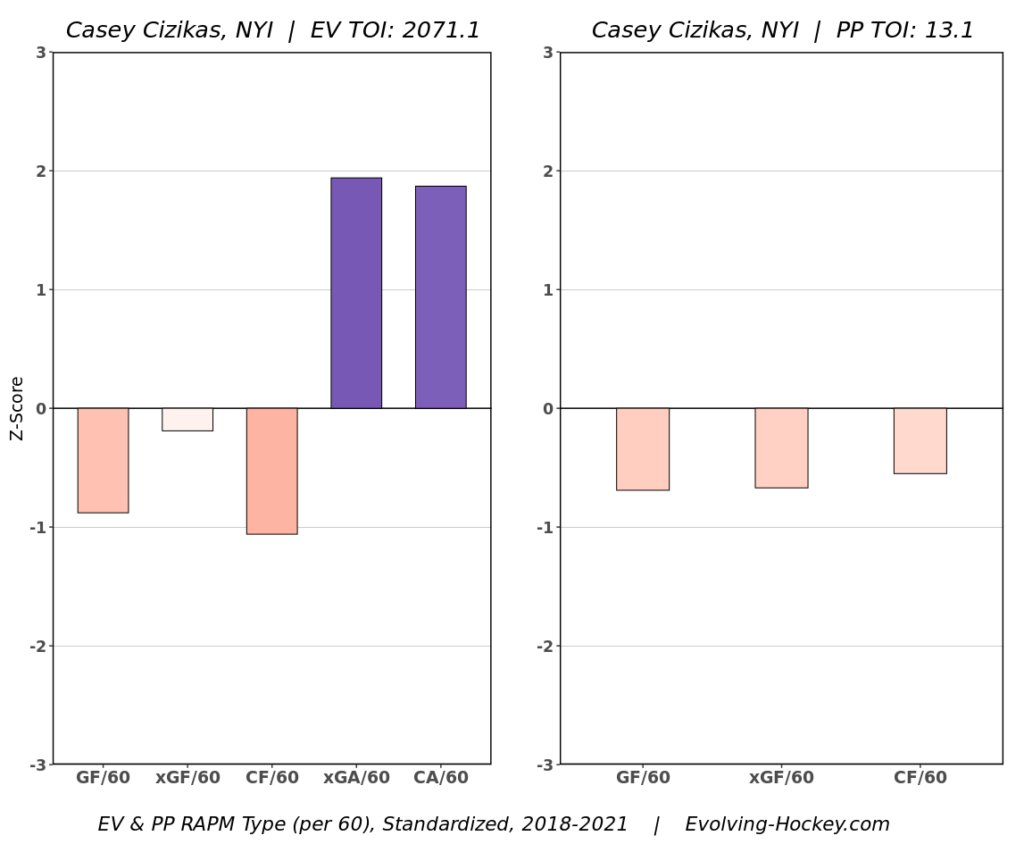 Cizikas is an all-defense, no-offense center. He’d kill penalties, add a little bit of that old-school “grit” factor fits with the narrative, and has familiarity with the division. The cap hit isn’t prohibitive for the Rangers, and they’d be able to afford a luxury like this.

Cizikias is an ideal 4C for a team that wants their fourth line to be defense first, and maybe chip in a goal here or there. He’s definitely an upgrade on Brett Howden. But the thing is, the Rangers already have a guy like this in Kevin Rooney. Rooney-Cizikas would make for a good shutdown duo, though.

Phillip Danault was someone I thought the Rangers should have pursued last year, but I don’t think the timing is right anymore. He’s unlikely to return to the Habs, and the 28 year old will get a good deal on the open market. 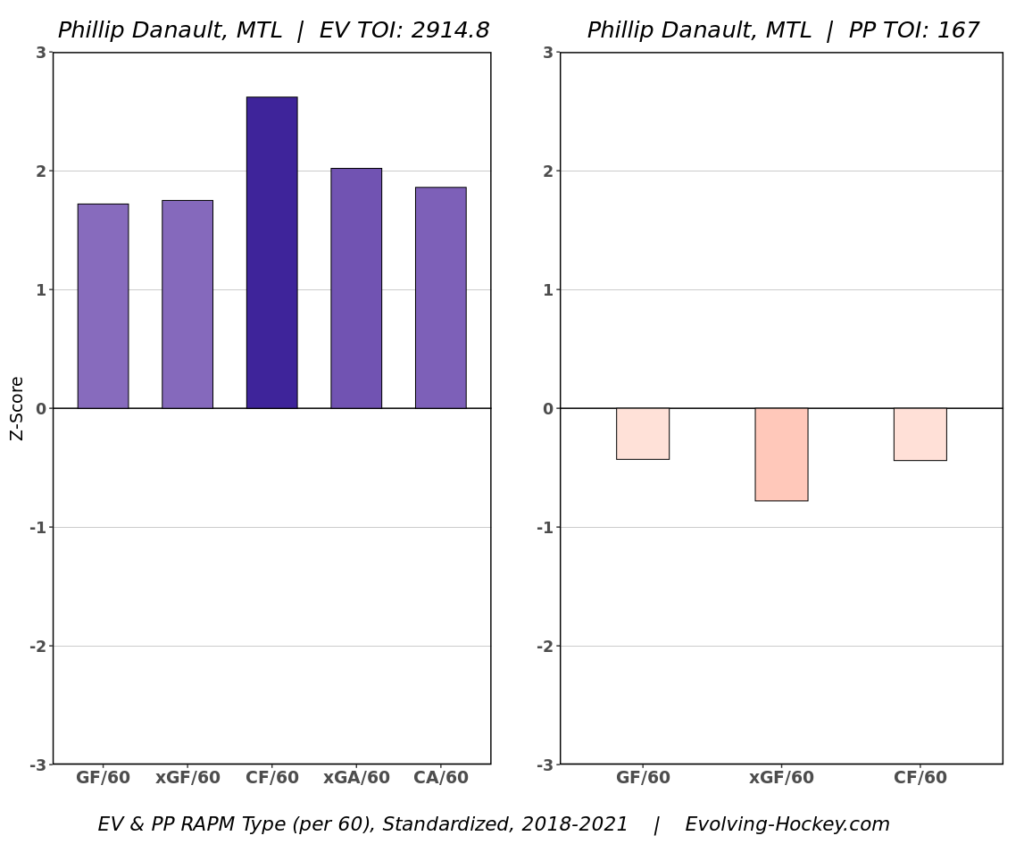 Unlike Nuge, Danault is likely going to be worth close to every penny he gets. The question is going to be the back-end of that seven year deal he is projected to get. Now if the Rangers can get him for fewer years, the dollar amount comes down as well. Per Evolving-Hockey, a 7 year deal is 23% likely to happen, but a 3 year deal –with a $5.3 million cap hit– is the second highest probability at 21 percent. That’s a deal I’d do.

But again, I don’t think he’s going to take a short-term deal. I say no to seven years, but yes to fewer than five years.

I can talk myself into a few of the potentially available center targets for the Rangers, but it’s such a grey area. We will get more clarity as some of the expansion draft prep shakes out.