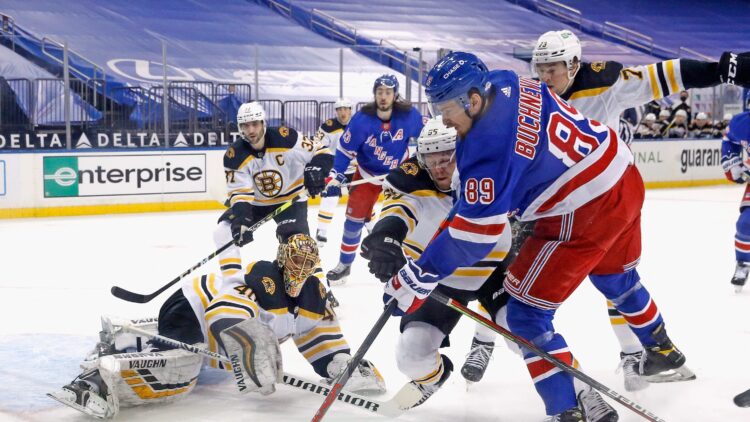 One of the top priorities for the Rangers this offseason is locking up Pavel Buchnevich to a long term contract. Tom Urtz at Blueshirt Banter beat me to the punch here, and you should be reading his piece as well. Given his production, expected cap hit, and current roster construction, Buchnevich is a no-brainer to re-sign this offseason.

The most important thing for the Rangers when re-signing anyone is the contract term and length. According to Evolving-Hockey, Buchnevich is expected to come in around $6.3 million on a 4-5 year contract. The Rangers can fit this in relatively easily over the next few seasons. And yes, this does account for a potential Jack Eichel trade. The cap space isn’t a concern.

At that cap hit, Buchnevich would be at 8% of the cap through his age-30 season, if signing a five year deal. His contract would expire along with Artemiy Panarin and Jacob Trouba. At that point in time, the Rangers will likely be immersed in big contracts to Alexis Lafreniere, Adam Fox, and Igor Shesterkin. The timing works out as well.

Buchnevich is, at the current moment, the only top-line RW the Rangers have. Yes, Kaapo Kakko and Vitali Kravtsov have the potential to hit that. If the Rangers are to truly compete for a playoff spot next year, they need to balance that potential with immediate production. Buchnevich gives you the latter.

In addition to his career year of 20-28-48 (30-43-73 over 82 games) last season, Buch has emerged as a force that drives offense as a quality two-way skater. In theory, if he were to get more powerplay time those offensive counting stats would go up as well. He’s the complete package that you want on the first line.

The key for the Rangers to compete is to balance production with potential. Locking up Buchnevich to a long term contract ensures the Rangers get the current production while players like Kravtsov and Kakko develop.

As with any long term contract, there is an inherent risk that Buchnevich’s production slips. In theory, if that happens then one of Kravtsov or Kakko should be able to step right in. Having balance and depth as the Rangers turn the corner to compete is critical for any team.

Following the Tampa Bay model, the goal is to acquire as much skill as possible and pay it. The cap will figure itself out at a later date. It’s not circumvention anymore, it’s a precedent. Pay the skill, which Buchnevich is, and figure it out later.