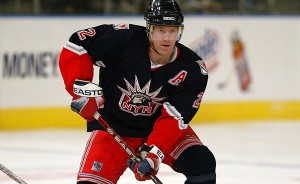 A little bit of a stunner, as Brian Leetch has resigned from his position with the Rangers in hockey operations advisory.

Brian Leetch has resigned from his hockey operations advisory position with Rangers, Post has learned.

This is a stunner because for the life of me, I couldn’t tell you what Leetch did or what his official title with the team was. I didn’t even know he had a position with the team. Shows what I know.

Update: Per Mollie Walker, Leetch was asked to stay with the Rangers, but he opted to leave. Sounds like he didn’t like what had gone down. Given how Glen Sather traded him, can’t blame him.

Whenever Leetch comes up, I have to mention the only time I met/spoke to him. I asked him who, if he could get away with it, he would have speared in the NHL. His answer was Claude Lemieux. I always laugh at that.