David Quinn is officially on the hot seat 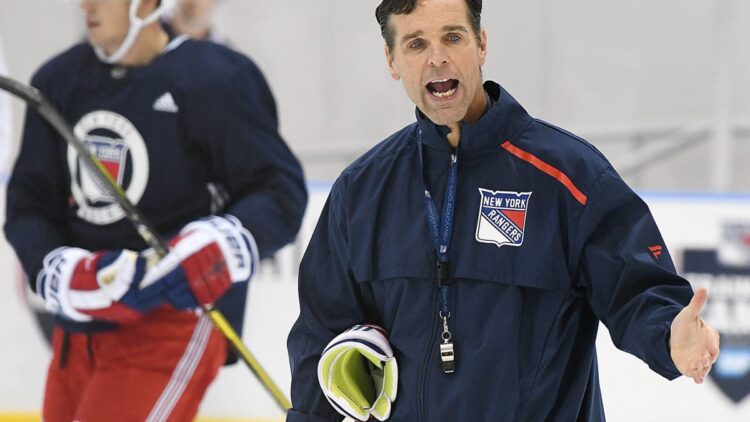 With the first day of exit interviews wrapped up the message from the players was clear. They know they made great strides this season and developed nicely as a club. Ultimately they came up short in the battle for the playoffs. There is no doubt the New York Rangers are in great shape going into next season with the kids getting some much needed experience this year. Among some Rangers accomplishments; Alexis Lafreniere looked great in the second half. Kaapo Kakko began his ascension to being a great all-around player and Adam Fox might just win the Norris Trophy. The Rangers will acquire some talent this summer to add to their talented core but the question remains. Will David Quinn still be the Head Coach much longer, or is he on the hot seat?

Quinn has had an up and down time as head coach. Some fans think he is bringing the kids along fine and others thinking he has been in over his head and hasn’t really adjusted well to becoming an NHL coach. This season in particular was rough for Quinn for a few reasons. He refused to give Lafreniere power-play time and kept him in the bottom-six far too long. Kaapo Kakko was demoted in the lineup after having fantastic games for seemingly no reason. There was the famous “Vitali Kravtsov is not a fourth line player” quote. He also forgot Julien Gauthier existed. The decision to even insert Jack Johnson into the lineup earlier this season was…not a good one.

Quinn also got over-matched by some of the better teams. He also couldn’t seem to get the Rangers ready for big games. In “must-win” games –the play-in series versus Carolina last year and games against the Islanders this year– the team has come out flat. Rod Brind’amour and Barry Trotz have coached circles around him time and time again. Quinn might have been an intriguing choice a few seasons ago, and maybe he was what the team needed at the time after Alain Vigneault. But now he looks like a guy who is overmatched at the NHL level and was coaching more to save his job than for development at points during the year.

Chris Drury was instrumental in the hiring of David Quinn, and he has a huge decision in front of him the next few days. Does he keep this same coach who doesn’t seem to have a strong system and can’t get his team ready for big games? Or does he begin a coaching search for the coach who will lead this team through their Stanley Cup window? It’s a first big decision for the new President and GM and he would probably want a new guy installed before the draft.

James Dolan has made it clear that he wants to speed up the process and having Quinn still learn on the job wouldn’t fit with that order. An experienced hockey coach, preferably with playoff experience, would be the best way to go this time around. Someone who knows exactly how to get the most out of his players would be needed now. Not someone who leaves important players on the bench when they’re needed. For that alone, David Quinn might be on the hot seat.

Who could replace Quinn? Names like Mike Babcock, Bruce Boudreau, John Tortorella and Gerard Gallant have been floated around. Personally, I’d love Gallant to be the next head coach of the Rangers with Bruce Boudreau running the power-play and the incumbent Jacques Martin to stay on to lead the defense. We will most likely know in the coming days if Drury intends to keep Quinn or install a new head coach just weeks before the draft, expansion draft and a busy offseason. Stay tuned Rangers fans.