It’s been a while since Tony DeAngelo’s name has popped up in rumors. In fact, it would be irresponsible to call this a rumor, as this is just spitballing. Given the injury to Aaron Ekblad and wide open Central Division, is there a chance that the Florida Panthers get desperate enough to trade for Tony DeAngelo?

The Panthers are riding high, sitting atop the Central Division and have won a whopping six in a row. They are going to make the playoffs, and in an unexpected twist, have a shot to make a run. The Panthers aren’t smoke and mirrors either, and are top-ten in both CF% and xGF%, showing they hold an edge in both quality and quantity of shot attempts. But they lost their best defenseman. 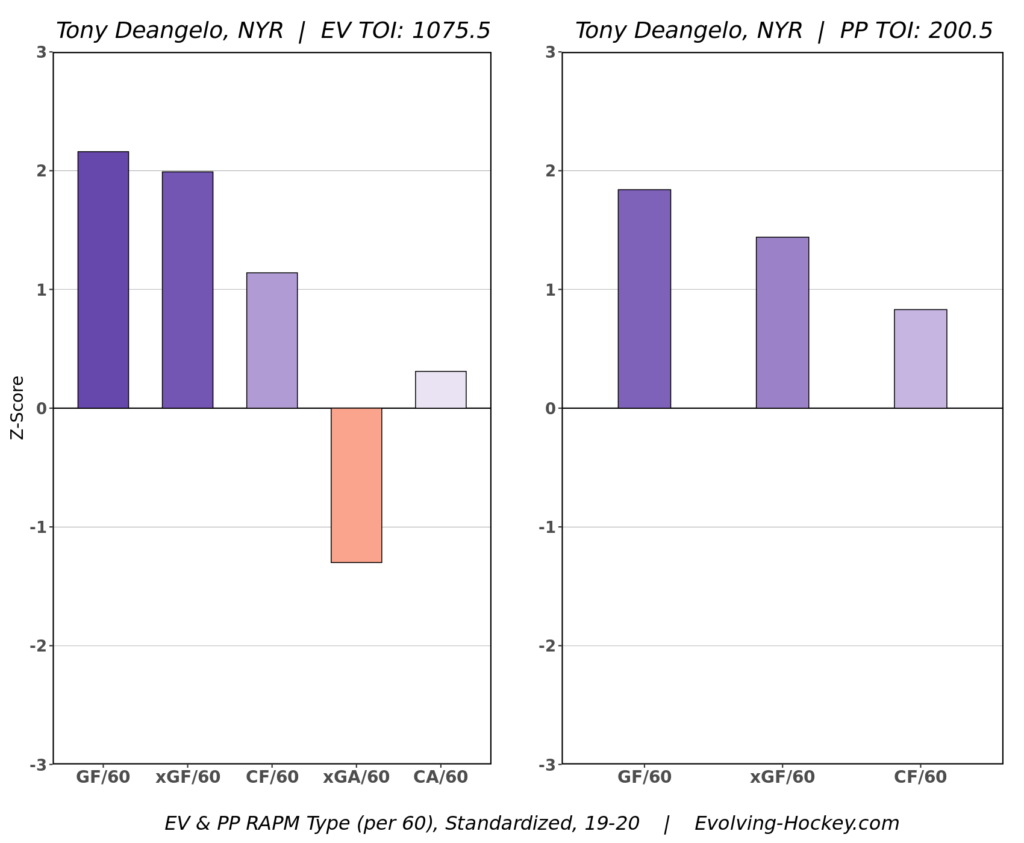 There is no replacing Aaron Ekblad, but DeAngelo does come close offensively. Using last year’s numbers, since DeAngelo only played 109 minutes this season, he at least drives offense. He can also be a powerplay quarterback for the Panthers, although that may not be an immediate need with both Keith Yandle and Mackenzie Weegar. Remember that DeAngelo is a year removed from a 15-goal, 53-point season.

The Panthers also have the cap space to absorb the full contract. He’d be a low cost trade option, since the Rangers are going to buy him out anyway. He’d also be a body to expose in the expansion draft, and someone they can buy out at a very low cost at $383k for two seasons. It’s a low risk, high reward opportunity for Florida.

DeAngelo has a ton of off ice issues, so many that there weren’t even any credible rumors after the Rangers placed him on waivers. This would require a major PR swing if the Panthers go this route.

Beyond the off-ice issues, DeAngelo may not fit exactly what Florida needs. Ekblad is a well rounded defenseman. DeAngelo is not. He’s all offense and no defense. A pure puck mover who would be more of a third pairing specialist. He’s also one they might not need, again with both Yandle and Weegar in the mix. Given how many goals Florida gives up, there’s a solid case they should go a more solid defender route.

The cap hit, while they can afford it, may not be something Florida wants to commit to, even if just for the remainder of this season. Also worth noting that Joel Quenneville would probably duct tape him to the bench or press box almost immediately. Probably doesn’t help that DeAngelo hasn’t skated since January 31.

In the end, I can’t picture Florida making a trade for Tony DeAngelo. There are too many question marks for what would most likely be a luxury, and not a necessity. Even if the acquisition cost is low, there’s just too much unknown at this point.

Dave1 week ago
28 250
Show More
Live From The Blue Seats
Become a Patron!
The Authors