When Brendan Lemieux was sent to LA after requesting a trade, it met a few needs for the Rangers. First they opened much needed cap space. Second, they opened a roster spot at winger. With such a logjam at wing, Lemieux saw the writing on the wall. The thing is, even with his trade, there is still a logjam at wing. All eyes are on Vitali Kravtsov and when he will get into the lineup. It begs the question: Do the Rangers need to make another trade to make room for the winger?

David Quinn is on record saying he needs to find top-nine ice time for Kravtsov. This checks out, given how the fourth line is usually used by Quinn in defensive situations. But with third line ice time on the forefront of the fans’ minds, it is time to make some changes to his approach. But perhaps that change doesn’t need to be on the coaching front. Perhaps it’s as simple as making another trade.

It seems odd, needing to trade someone just to get Kravtsov in the lineup. It shouldn’t be necessary, in fact it really isn’t needed at all, but sometimes “need” isn’t born from a roster logjam. Sometimes the need, and this might be a stretch, is born from an adjustment that you just won’t make on your own. If that need is to find a spot when you just can’t bench anyone, then that trade need becomes more clear. As an added bonus, a trade frees up a spot to recall Morgan Barron.

There are only two candidates that realistically have a shot at being traded. And those are Phil Di Giuseppe and Julien Gauthier. Sorry folks, Brett Howden isn’t going anywhere. Plus he’s still in COVID protocol.

I like Phil Di Giuseppe. He’s a solid fourth liner and depth forward. He’s not spectacular, but he drives shot attempt quantity and limits quantity against. Di Giuseppe is everything you need to round out your roster. 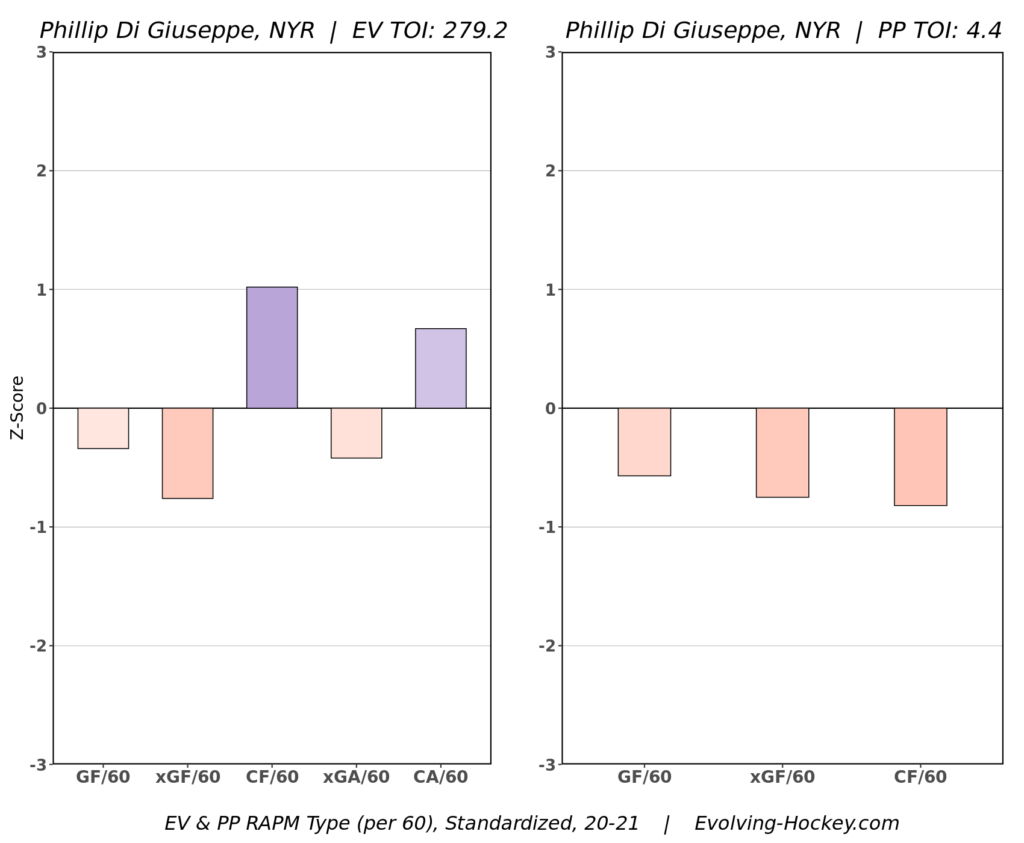 Di Giuseppe won’t get much at the deadline, maybe a late pick or a dart throw on a C prospect. But he’s also someone that doesn’t impact the expansion draft, making his trade easier to facilitate.

In trading Di Giuseppe, the Rangers could feasibly create a fourth line of Blackwell-Rooney-Gauthier, with Howden still in COVID protocol. That fourth line is still good on both sides of the puck, and Gauthier would give it more offensive potential.

The case for trading Julien Gauthier

I *really* like Gauthier. Getting him for Joey Keane was great asset management by Jeff Gorton. The kid has the tools to be a solid NHLer. We’ve seen that in flashes as well.

This is what Gauthier brings to the lineup. He has great wheels and the hands to match it. The question will be whether or not he can put it together. Even if he can – where does he fit in the Rangers future? The Rangers are loaded at wing, and unless they are looking to trade Pavel Buchnevich, Gauthier is the odd man out.

A player like Gauthier can be a nice sweetener in a bigger trade. He would also likely fetch more than Di Giuseppe in a deadline deal. But he would need to be protected in the expansion draft, which adds a wrinkle to any deadline trade. Plus, I don’t think the Rangers would want to pass on him so soon, after seeing what he can do.

That said, if the Rangers believe Gauthier needs to be a top-nine forward, then they need to make a choice between him and Kravtsov. As much as I like Gauthier, the answer there is always going to be Kravtsov. Trading Gauthier now would also make lineup life easier on David Quinn, as it would essentially be a swap for Vitali Kravtsov.

This is a tougher sell at this juncture, but might be an easier sell in the offseason.

Even if Vitali Kravtsov isn’t in the long term future plans for the Rangers, they need to get him in the lineup to at least showcase him. I have a hard time believing the kid isn’t in their plans though. Cheap top-nine talent is a key ingredient to a Stanley Cup contender, and Kravtsov checks all those boxes.

David Quinn can easily get Kravtsov into the lineup now. But sometimes old habits are hard to break. He is human, after all. These guys aren’t robots, and they are prone to their own bias. We all are.

Getting Vitali Kravtsov into the lineup soon should be a priority for the Rangers. If that means dealing a pending UFA or a kid who might get pushed out, so be it. It’s the cost of doing business in the NHL.