When it comes to the trade deadline, the Rangers don’t have many tangible assets to trade from. Unlike past deadlines during the rebuild, their pending UFAs aren’t of much value. With Phil Di Giuseppe likely not getting much in a trade, it makes you wonder if a Brendan Smith trade makes more sense. He might have some actual value, given he’s been relatively serviceable this season. At least when he’s not paired with Libor Hajek.

Two irresponsible rumormongering posts in one day? How dare I? 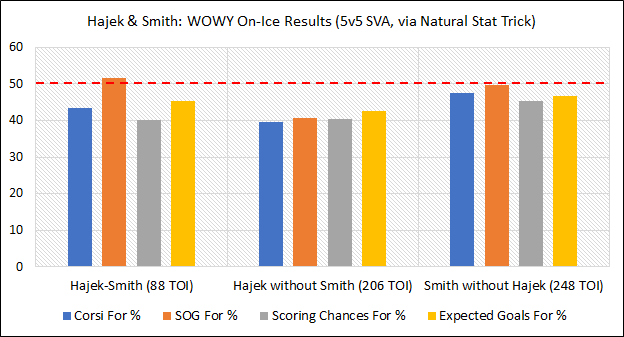 When Smith is away from Hajek, he’s a serviceable third pair defender. He’s not going to win you games, but he shouldn’t cost you games either. He’s certainly overpaid on his current contract, but dealing Smith at 50% has some decent value. Plus there’s no need to protect him in the expansion draft, as a pending UFA.

It’s odd saying the Panthers are in the playoffs, but with the top-four in each division qualifying, the Panthers would basically need to lose every single game for the rest of the season to miss the postseason.

This is also a team that just lost Aaron Ekblad for the season with a gruesome leg injury. There is a spot on the blue line for someone who can hold their own, and they have the cap space.

It’s odd to see the Panthers as buyers, but in a wide open Central Division, the Panthers have a shot to make some noise. Is this the year they make a low key move like this?

Does a fourth round pick, the same return for Brendan Lemieux, get the job done?

Another team in a surprising playoff position, the Hawks just acquired Vinnie Hinostroza to shore up their forwards. With basically no one on their blue line, this could be a fit as well. This does assume the Predators commit to their rumored rebuild though, as that would likely put the Hawks in fourth in the division.

Then again, the Hawks are rebuilding themselves. Do they sacrifice real assets for a miracle playoff run? There’s a case for meaningful games for players like Kirby Dach, Adam Boqvist, and Alex Debrincat. Is that experience in the playoffs, likely in a one and done, worth a mid or late round pick?

Given the way the NHL thinks, the Hawks might think so.

We are getting into murky waters here, since the North division has a quarantine restriction on any player coming in at the trade deadline. That said, Edmonton is missing Oscar Klefbom and Slater Koekkoek, This might be a stretch, given the cross-border issues and the lineup construction issues, but Edmonton has always been a team that makes some weird trades.

Smith would certainly be able to fill in on both sides of the blue line, He might also be a decent upgrade on Kris Russell or Tyson Barrie. But how much of an upgrade would he be, if at all?

There aren’t many teams that would make a trade for Brendan Smith, given his contract. Even at 50% retained, it’s an expensive proposition for teams bringing in limited revenue this season. But he does have on-ice hockey value. It’s still a possibility the Rangers trade him, even if they view themselves as playoff contenders.