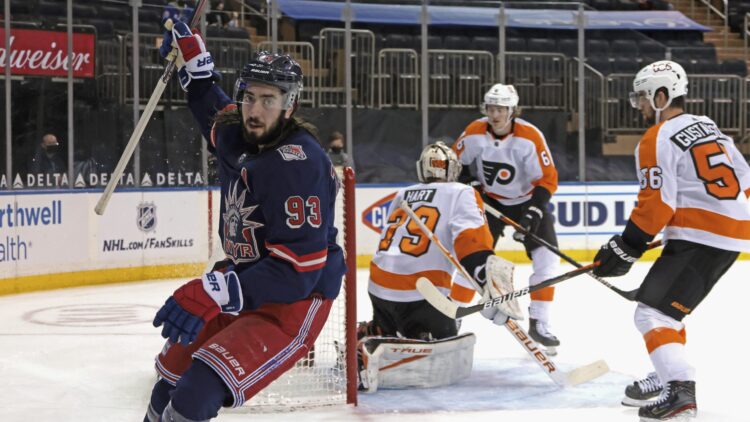 Happy March! A new month means a new 20 New York Rangers Thoughts column from yours truly covering all things from the previous month. The Rangers went 8-6-1 (NOTE: all stats in this blog post do NOT include 3/30 vs. Washington) and put up 9 and 8 goals in separate games against the Philadelphia Flyers. Weird month! Let’s get into it.

1. The Rangers are not going to make the playoffs. I’m sorry and I hope I am wrong, but it’s not going to happen. New York is currently 6th in the division. They are closer to the New Jersey Devils in the standings than the Boston Bruins. For the Rangers to make the playoffs, they would need to go something like 18-4 and have the Bruins and Flyers perform below their capabilities. It’s not realistic, but there’s no reason to not go for it anyway.

2. The deadline is coming up, so I’m going to piggyback on my last thought. Yes, I fully believe the Rangers will miss the playoffs. No, I do not believe the Rangers should sell at the deadline. This team needs confidence going into next season, and the longer they stay in the playoff hunt, the better for their confidence. The kids need to play in important games for as long as possible. Trade a fringe player like Brett Howden or Brendan Smith for sure. Don’t trade any key roster players.

3. Why are the Rangers going to miss the playoffs? Easy answer. The Rangers are 3-8-4 in one goal games. If you change that to 7-7-1, the Rangers would be ahead of the Bruins by three points for the last playoff spot. This team cannot win close games, and it will be the reason they miss the playoffs.

4. I want to speak on what made me most livid this month. The way the Rangers handled Keith Kinkaid and Alex Georgiev is unacceptable. I’d go as far as to say if Kinkaid plays in another game this season, the Rangers have lost my trust in their decision making on goalies.

Georgiev is a 25 year old who as recently as last season played a full, above average season in the NHL. Kinkaid is a 31 year old career AHL at best goalie who has a below .890 save percentage in his last 45 games.

Yet the Rangers opted to start Kinkaid in not only one, but two vital games against the Flyers and the Capitals. Kinkaid was horrific (matching his talent level as a goalie) in both games, and the Rangers came away with one point in two very winnable games.

Kinkaid is not a good goalie. Full stop. Yet the Rangers continued to shoot down any semblance of hope for Georgiev to gain some confidence, all because Kinkaid shut out the Bruins in the Rangers’ best game of the season, and had one good game against the Capitals.

5. OK, onto something more fun. The 9-0 victory over the Flyers was the most fun regular season game I’ve seen in a long time. Definitely the most fun blowout I’ve ever seen.

6. That brings me to a fun question: what’s your favorite regular season, non-OT game since let’s say 2010? Comment below.

7. Mika Zibanejad has been inhuman, so I’d like for him to stay with Chris Kreider. Artemi Panarin and Ryan Strome have been fantastic together. But I’d like to see Pavel Buchnevich moved to help the kids. Here are some potential lines:

This helps develop the youngsters, while keeping the vets together. Thoughts?

9. The Rangers may not be the best organization at developing young players, but the team deserves credit for Ryan Lindgren. Lindgren was never touted as a top prospect or someone who would crush it at the NHL level, even despite where he was drafted. Lindgren deserves a ton of credit as well, but that he’s a legitimate top pair defenseman in the NHL right now is indicative of the team handling him the right way from start to finish. Success story.

10. Do not trade Nils Lundkvist for anyone or anything. Please.

11. Eventually the Rangers are going to have some difficult decisions to make, but here’s something I’ve been thinking about lately. With Mika Zibanejad back to being his 1C self, Ryan Strome putting up 2C (or 1C, honestly) numbers, and the forwards all healthy, shouldn’t the Rangers be playing like a no doubt about it playoff team from here on out?

Where’s the weakness on this roster? I understand the argument that the kids aren’t ready to perform at that level, but this team is deep. As I said earlier, they won’t make the playoffs. But if the Rangers don’t finish the season with their April record being that of a playoff team, I’ll be disappointed. This team has the talent.

12. The Rangers have the opportunity to give the Sabres their 20th and 21st losses in a row. Only one game in their way. Honestly? I hope it doesn’t get to that point. I’m feeling bad for the Sabres, but I’m also feeling worse about the thought of the Rangers being the team to end their losing streak (and how Twitter would react).

14. Not to harp on the ghosts of Rangers past, but seeing the Alain Vigneault slander following the Rangers absolutely destroying the Flyers twice made me SO happy. Vigneault is not a good NHL coach. His teams are atrocious defensively, he can’t adapt, and he rides elite goaltending to good records.

Recently he called out Carter Hart for lack of work ethic, which reminds me of the various times he called out Henrik Lundqvist, Ryan McDonagh, etc. Vigneault will never accept the blame for his shortcomings, and will always throw his players under the bus.

I hope he stays in Philadelphia forever.

15. I’m not worried about Filip Chytil at the moment. He looks weak and he’s barely able to use one of his hands. I think he is playing both hurt and recovering from his COVID situation. We need to remember what happened to Mika Zibanejad before we jump to judge other players going through similar struggles. This applies to Kaapo Kakko as well.

17. The Brendan Lemieux trade made a lot of sense for a team with far too many forwards. I do worry that the Rangers will overcompensate and add someone with no talent to the roster to protect other players, however. Keep an eye out for the name “Mason Geertsen.” If he gets promoted, the Rangers are going with an enforcer over a talent.

18. I am feeling very optimistic about next season. Tons of cap space. Another year of development for Kakko and Lafreniere. A potential trade for Eichel or another top center. Igor in net for a full season. Lundkvist in the NHL. Legit depth throughout the lineup. I think next season will be the first of a lengthy group of playoff runs. This season is all about development in the meantime.

19. With that in mind, the Rangers are in a tricky situation. They want to develop the Kakkos and Lafrenieres of the team while still recognizing the Kreiders and Buchnevichs are the most talented at this specific moment. David Quinn’s job is to win games as much as it is to develop players.

I’m fascinated to see how he juggles these responsibilities moving forward. The kids need playing time. Lafreniere should never play fewer than 15 minutes a night. But there’s only so much playing time to go around when everyone’s healthy. This may lead to a Buchnevich trade or struggles to develop the youngsters. It’s a very complicated, nuanced situation that is at the forefront of my mind for the rest of the season.

Three Stars of the Month: