Rangers blow out Flyers for second game in a row 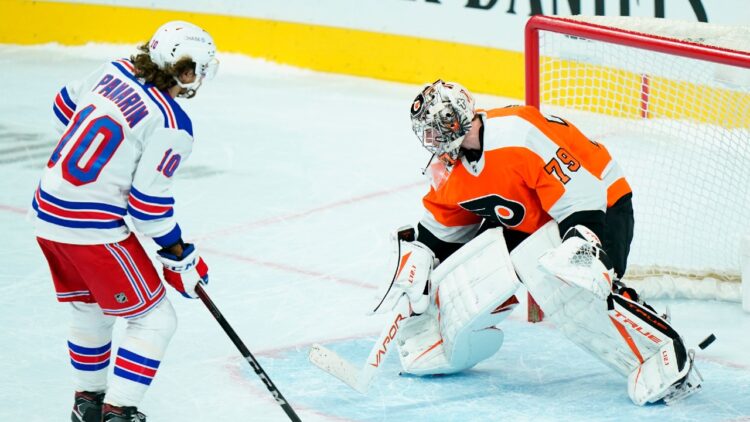 For the second game in a row, the Rangers and Flyers played to a blow out. The Rangers got the first six goals in this one, all in a period and a half. That gave them 15 straight in 4.5 periods against the Flyers, which has to be some kind of record. The Flyers made it interesting, with two goals to close out the second after the Rangers fell asleep. But the good guys woke up and added another for insurance, then killed the clock.

Mika Zibanejad had another natural hat trick. Adam Fox had 5 assists. Pavel Buchnevich two goals. Ryan Strome four points. The Rangers didn’t have scoring from their top six for half the season. They are certainly making up for lost time now. Oh, and Artemi Panarin only had one assist in this one.

Don’t discount what Igor Shesterkin did in this one either. He made some big saves early, which kept the Flyers off the scoreboard for them to start the blow out. His timing was a little off, which makes sense, but he was solid when he needed to be.

Fox with the pass to Panarin, Strome with the redirection. 1-0 #NYR pic.twitter.com/Us9hs3q7pF

This is a helluva passing play by Adam Fox and Artemi Panarin, with Ryan Strome finishing. But what were the Flyers doing on defense? A trio of players in a straight line in front of the net, and Jaub Voracek laid out, did nothing, and let the pass go through

This is a bit of a bad luck 2-on-1 for the Flyers. The puck hopped over Nolan Patrick’s stick in the neutral zone, which turned into an odd-man rush. Chris Kreider fed Pavel Buchnevich for the quick two spot.

Some quick passing up top on the powerplay with the one-timer from Fox. This keeps Carter Hart moving, which is important, but keeps the attention up top, which is equally important. Usually it’s Kreider in front, but Mika Zibanejad was there this time for the deflection.

Rangers 4, Flyers 0 – The Flyers are bad in their own zone

This was a flurry of action, which meant that, in an Alain Vigneault system, no one was in the right position. That led to Zibanejad being wide open for the one timer.

Mika Zibanejad completes the natural hat trick, once again, against the Flyers 🎩🎩🎩 pic.twitter.com/MTsCH3W8Ay

Triangles. Always look for triangles. The first triangle was the Panarin, Fox, Zibanejad triangle. That got the puck to Fox up top. The next triangle was Fox, Strome, Zibanejad, which was the goal. This one really confirmed this was going to be another Rangers blow out of the Flyers.

This one from K’Andre Miller hit Shayne Gostisbehere. I couldn’t find a gif of this one, sorry.

Hayes tallies his tenth of the season and we're headed back on the PP at 14:28. #NYRvsPHI pic.twitter.com/vLLzCC3mcf

Not much you can do on a pass like this. This was a great pass though, just enough air to get through the slot, and landed right on Kevin Hayes’ stick for the one-timer.

Pavel Buchnevich scores a short-handed goal to add to the #NYR lead, with assists from Adam Fox and Mika Zibanejad. Make it a 5-point game for Fox & 6-point for Zibanejad. pic.twitter.com/HWfo8radBc

After the Rangers dodged a bullet on Pavel Buchnevich’s puck over the glass, they turn a shorty. Mika Zibanejad and Adam Fox with the good passing to Buch alone.

Rangers 7, Flyers 3 – And a powerplay answer

Slot line pass. There isn’t really fault here. The man in front draws attention, and Ryan Strome covers the high slot. It’s a numbers game. The gifs for the late goals were hard to come by.

Alexis Lafreniere banked this one off Brian Elliott from behind the net. Filip Chytil must have gotten a piece on this, since he got credited with the goal. No video of this one either.

This game is full of score effects. This shows a Flyers dominated game, but we all know that’s not the case. This is noteworthy because the Rangers let off the gas big time. We were sweating a bit to start the third, but fine now.

Another one where you can’t really judge what the chart says. This has score effects all over it. But again, the Rangers let off the gas.

This was yet another Rangers blow out of the Flyers. I am a little disappointed that this wasn’t another 9-0 win, but 15 straight goals in 4.5 periods was a nice run. On March 19, I wrote the Rangers needed to go 21-7 in their final 28 games to close out the season to make the playoffs. Since then, they’ve gone 3-1. If they win 75% of their games like this, then they make the playoffs. They just need to win 3 of 4 on average. That will do the trick. It’s doable.

Charts from Evolving-Hockey and NaturalStatTrick.