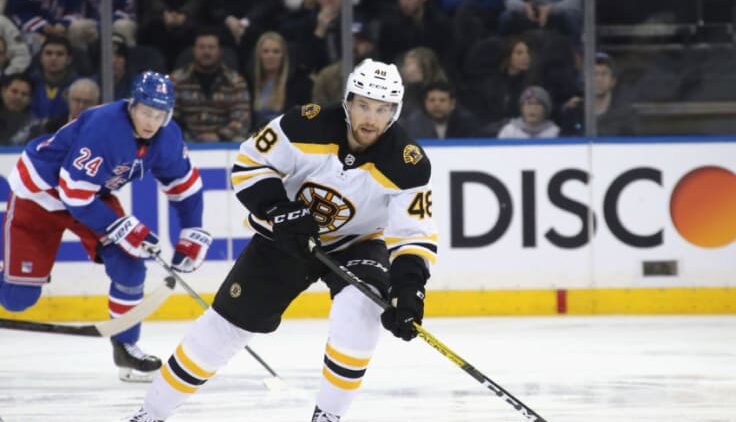 Sometimes, the goalie just steals one. That’s what happened tonight for the Rangers. Tuukka Rask made many great saves, and stole two points for the Bruins in overtime against the Rangers. The Bruins controlled most of the offensive shots on goal, but it was the Rangers who got better quality. Rask came up huge on multiple occasions, and he was the difference.

The fourth line for the Rangers looks for real, as they accounted for both Rangers goals. Julien Gauthier got his first NHL goal, and you can be damn sure the Rangers are going to tweet a picture as soon as possible. Kevin Rooney tied the game late with a nice goal off a deflection. But it was a broken 2-on-1 that led to a Brad Marchand breakaway that ended it.

Julien Gauthier scores his first NHL goal to give the #NYR a 1-0 lead pic.twitter.com/xnauiMwLpN

The Bruins did not cover the slot on this, a rare mistake on defense by them. Julien Gauthier read the play and cut to the slot and roofed it over Tuukka Rask.

Chris Wagner stopped an Artemi Panarin pass and then beat him to the puck and beat Alex Georgiev glove side on the breakaway.

Jacob Trouba lost an edge in the corner, which led to Anders Bjork getting free for the unimpeded path to the net. There were calls for Georgeiv to stop this, but it’s a clear path to the net. I have a hard time buying that he needs to stop it. You want him to, and prime Henrik Lundqvist does stop him, but we’ve been spoiled. No one is prime Lundqvist. Normal goalies don’t stop chances like that regularly.

Lindgren shoots, Rooney scores. The goal is reviewed to determine whether it went in with a high stick, but it's ruled a good goal. Tie game #NYR pic.twitter.com/2CMZhdaocY

Ryan Lindgren’s shot from the point gets deflected –arguably with a high stick– by Brendan Lemieux. Rask makes that save, but Kevin Rooney is there again to bang it home.

McAvoy breaks up Buchnevich's pass to Zibanejad, Marchand scores on the breakaway to win the game in overtime #NHLBruins #NYR pic.twitter.com/B7sop9oPJV

Brad Marchand buried the breakaway after Charlie McAvoy broke up a 2-on-1.

Shot Heatmap – All Bruins, All The Time

The Bruins had a stranglehold on the shot attempts in this one. This was almost entirely because of the second period, where the Bruins outshot the Rangers 27-11. But it was just the quantity aspect of the game.

Skater Results – Rangers had the quality

The Bruins had the quantity, but the Rangers had the quality, and boy did they ever. This is a much different Rangers team that is trending in the right direction. Rask was the only reason why the Rangers didn’t win this in regulation.

The Rangers played well in this one. Quality is the focus of their game, and they did a good job limiting quality against while getting quality of their own. Sometimes, the goalie steals one, and Rask stole one against the Rangers tonight. Here’s hoping he doesn’t do it again on Friday.

Charts from Naturalstattrick.com and Evolving-hockey.com.