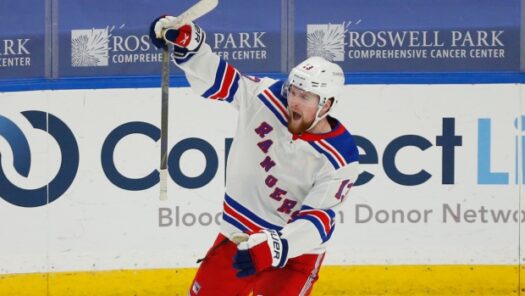 To steal a word from the Joe Micheletti handbook, just a fabulous game from start to finish last night. From the drop of the puck, the Rangers showed some real poise, and some real tenacity with the puck–more than we’ve seen yet this season. The top six was finally clicking tonight and getting some glorious scoring chances. Despite a loss for him, give credit to Buffalo goaltender Linus Ullmark. He played out of his mind for 60 minutes. But it was a 2-on-1 cross creaser from Alexis Lafreniere, for his first NHL goal, that was the difference in overtime. You can’t say he didn’t give his team a chance with some of the saves he made. But let’s get to that more a little later shall we. Let’s break this one down!

The first period was an absolute shooting gallery for the Rangers; especially the top six players. Ryan Strome and Artemi Panarin had their best full stop games tonight. Strome scored off a dirty feed from Panarin in the trapezoid through a few defenders hitting Strome backdoor. It is a great sign and hopefully they will build off this as we progress into this season.

By the end of the period, the Rangers had generated 15 shots on goal vs 5 from the Sabres. A rare giveaway from K’Andre Miller unfortunately found its way onto Sam Reinhart’s stick, who threw it cross crease to a streaking Eichel who tapped it in on the backhand backdoor. Nothing Igor Shesterkin could have done.

A score of 1-1 late into the first would with this season made us think they would give up, but that could not have been further from the truth. The Rangers came out in the second and won the shots and puck possession battles again.  A nice goal from Panarin off a bouncing puck from the left circle to put the Rangers up 2-1.

This period–as well as the 3rd–had some of Lafrenière and Zibanejad’s best scoring chances we’d seen up to this point, but neither could buy a goal. A couple of net mouth scrambles, a few power plays, and some much crisper passes. Ullmark was just up for the test on each and every chance in regulation it felt.

The Sabres would eventually tie the game due to a big hit by Lindgren on Kyle Okposso that would take him out of the game for the rest of the night. On the ensuing power play, the Rangers couldn’t get the kill as Olofsson threaded a pass past Jacob Trouba (who had his stick on the ice not in the passing lane) and hit Reinhart perfectly backdoor in the early stages of the 3rd period.

As the rest of the game progressed, the Rangers once again at even strength dictated pace, possession, and flow of the game. It was also in this period that Strome would sustain a mild lower body injury and not play the rest of the game. That will be an interesting development should he have to miss time. We would be going to OT for this one.

Also completely unrelated, but isn’t it interesting that even with Jack Johnson out, integral piece of the McDonagh trade Libor Hajek can’t make this lineup huh? Anyways…

In overtime, Blackwell, Lafrenière, and Miller were the trio on the ice that ended it. Following a 2-on-1 chance against, Blackwell and Lafrenière would battle for possession in the neutral zone. Blackwell would eventually get a bounce and block a pass attempt with his skate and get a 2-on-1 with Lafrenière, with Eichel as the forward playing defense. Blackwell sauced it, Alexis Lafreniere corralled it, and ripped it past Ullmark for his first NHL goal and first overtime winner. About as epic of a first NHL goal as you can have. Sam Rosen couldn’t have had a better goal call either. The man was exuberant. That game was fun, let’s continue this!