With Filip Chytil out for 4-6 weeks, the Rangers will have to find a replacement on the third line. There are only two realistic options, with one being more realistic than the other. Both Brett Howden and Colin Blackwell (albeit in one game) have played well this season. Both, in theory, should survive with Phil Di Giuseppe and Kaapo Kakko. 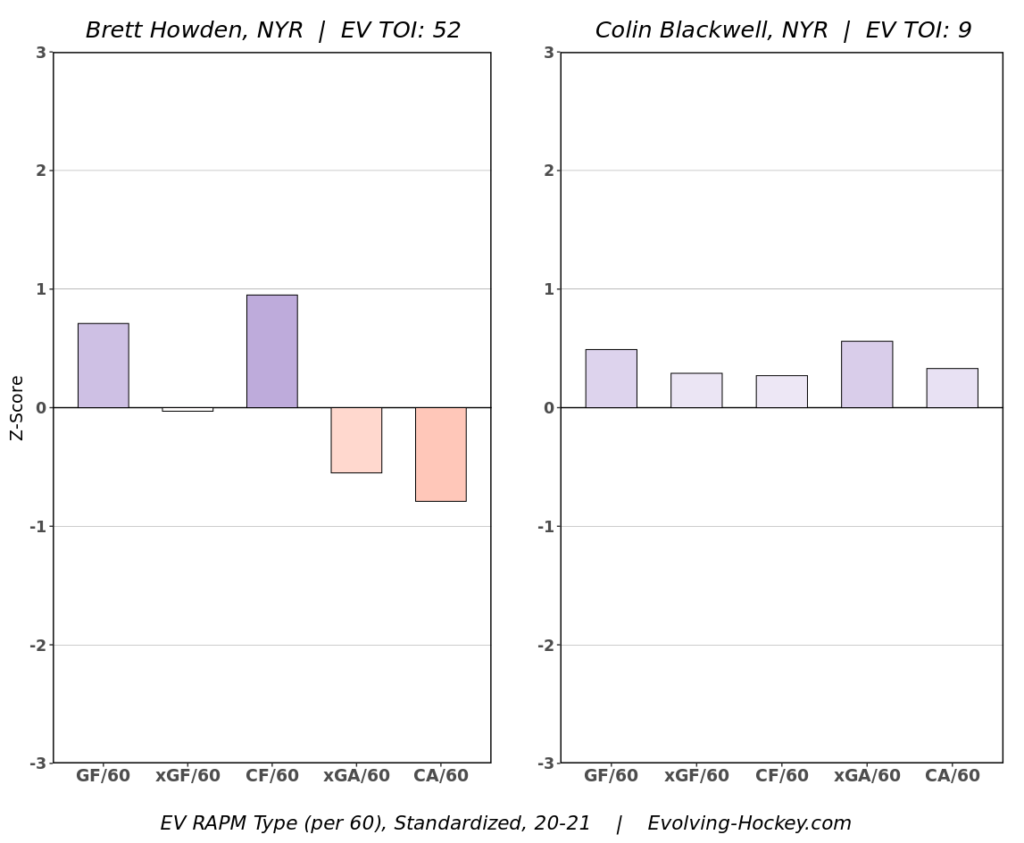 A direct comparison of the two doesn’t really show us many differences. It also doesn’t necessarily mean much this early in the season. Blackwell played one game, and Howden is dragged down by two atrocious games, but was great in the other three. But we get what we expect. Howden is a little worse on defense. Blackwell is more well rounded. The question is – who is better for the 3C role in the interim?

The case for Howden

Let’s be real, Howden will get the 3C nod for now. However this isn’t like last year, where Howden was a black hole. He’s been significantly better this season, and has found a home on the fourth line. That line has worked very well to start the season.

Howden’s numbers are dragged down by two very poor games against the Devils and Penguins. Granted, that is 40% of the season so far, so take that with a grain of salt. But still, it’s hard to argue that Howden hasn’t looked significantly better this season. It could be that it’s his third full year, thus he’s getting a grip on things. It could also be that he’s found a good place for himself in the lineup.

Either way, when kids play well and a chance to move up is presented, then it sends the right message moving him up in the lineup.

The case for Blackwell

Blackwell has a history of being a play driver wherever he goes. He was excellent in that role, in a limited capacity, with the Nashville Predators. The numbers suggest that he’d do well with more ice time. The only way to know for sure is to give him that opportunity.

The primary case for using Blackwell in this role is to ensure the Rangers don’t break up something that is working. The fourth line of Howden, Brendan Lemieux, and Julien Gauthier/Kevin Rooney is working. Given David Quinn’s habits of rolling all four lines evenly at even strength, having that comfort of a line you know works means something.

It is worth noting that the Howden/Kakko duo was downright awful last year. This is a different season and both look better. But another case for going to Blackwell is just that – why go back to something if it didn’t work before? The definition of insanity is doing the same thing over and over again and expecting a different result. By that definition, putting Howden in the 3C role with Kakko would be insane. Thus, Blackwell becomes the only option.

In the end, we should expect Quinn to shuffle the lines a bit. Howden will likely get the first look. Expect him to get a long look. Only in the face of overwhelming evidence will Quinn put someone else in that role. But, I’d expect that to happen at some point. In that case, expect the lines to be shuffled.

If there’s one thing we know for certain, it’s that finding a replacement for Filip Chytil really exacerbates the center depth issue for the Rangers. The only two options are a guy who didn’t work there for two years (Howden), or an offseason flier who happens to have good underlying numbers. Not exactly the best case scenario.