Fresh off yesterday’s loss where Igor Shesterkin gave up two soft goals in the third period, panic hit the fan base. The Rangers have bad goaltending, according to the masses. Neither Alex Georgiev nor Igor Shesterkin are ready for the starting job, apparently. It seems, perhaps, that the fans quick to run Henrik Lundqvist out of town don’t understand what patience is. It also seems that we were all spoiled by Lundqvist for the past 15 years. But I wouldn’t worry about the NY Rangers goalies.

Let’s have some patience, shall we? It’s two games each for Georgiev and Shesterkin. Both have had strong moments, and both have had growing pains moments. That’s expected.

Remember there was no preseason. There were no real games before the season started. There was barely a training camp. These guys are basically being thrown out there with no warmups. It’s like putting Julie ‘The Cat’ Gafney out against Gunnar Stahl. Except this time the shooters don’t stop at the blue line on a penalty shot and take a slap shot.

These kids also don’t have the security blanket that was Lundqvist. He was there as a mentor and a calming presence. Now it’s the kids or no one. Their mistakes are their own. For all the talk that the locker room needs leaders, losing someone like Lundqvist will impact Georgiev and Shesterkin.

But that’s ok. Shesterkin has played all of 16 games at the NHL level. Georgiev has played just 79 games. We’ve been hearing about or seeing them for a while though, so it seems like they’ve been here longer. That’s less than 100 games combined for them. Keep that in mind.

They are still performing well

Small sample size alert. Despite some of the weak goals, the overall body of work has been solid for both. 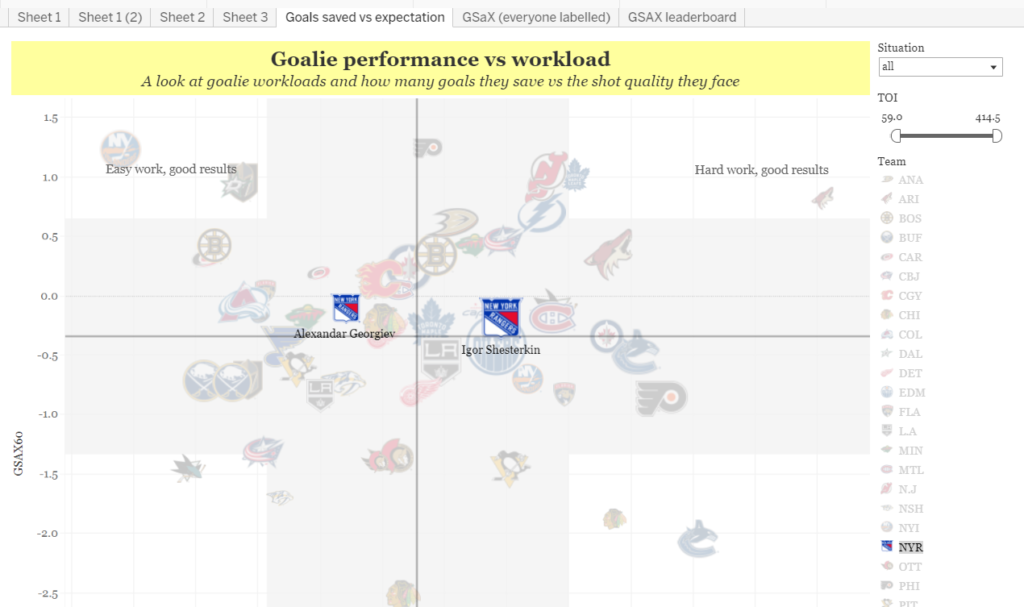 Both are in the “good results” section of the above, which is all you can really ask for. Shesterkin has seen significantly harder work, mostly from that first game against the Isles. But despite that, he’s been good. So has Georgiev.

Goals stick in our minds a lot more than saves. Both goalies are very fluid and smooth with their movements. We don’t see the great saves as great because they are in position and react so well. The mental mistakes will become few and far between as they get more experience.

It’s not all doom and gloom for the NY Rangers goalies. They will be just fine. Patience is a virtue.