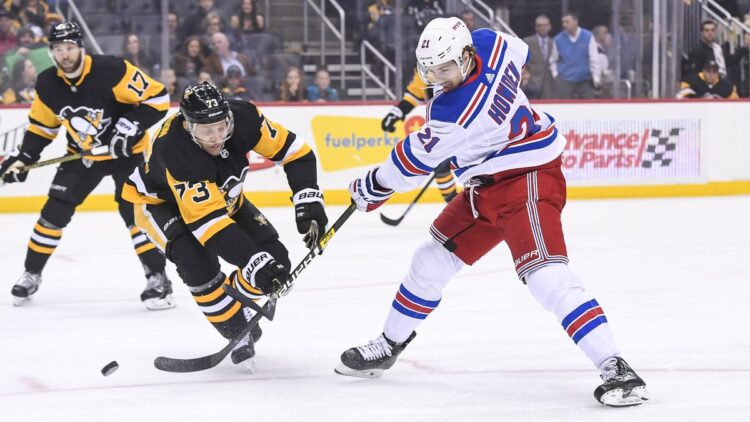 Last night’s game was tremendous indication that this team is trending upwards in dictating flow, possession, and shot share. While the team played well, the Penguins got some lucky bounces directly to their sticks, plus one of the worst defensive plays I think I’ve ever seen from a professional hockey player in my life. We’ll get to that later though. For now, let’s start off the thoughts with a list of positives. Let’s get to these thoughts shall we?

Igor Shesterkin started in this one and I thought he had a really good game. He was tracking pucks extremely well. Plus he was quick in his positioning, and showed some great resilience when the Penguins crowded the net. Despite the score, I really couldn’t blame Shesterkin for any of the goals against tonight.

The goals against happened like so: Cody Ceci shot deflected in front by Bryan Rust. Ryan Lindgren blocked a shot while crouching in the crease. He then slid the puck into the net so he wouldn’t get a covering the puck penalty. Finally, a lively bounce off the end board right to Teddy Blueger’s stick. Soft defense by Tony DeAngelo and Jack Johnson gave an open net. Zibanejad tried to cover for them, but couldn’t get his stick in front of the shot in time. So while yes, the Penguins did score 3 goals tonight, it was not by Shesterkin’s play like we saw in the opener.

The Rangers would respond with their own set of goals tonight though. All were scored in the 2nd period while demonstrating some textbook game flow. They also showed puck possession that I think we would all agree we know this team is capable of with this roster.

The best line tonight was by far Phil DiGuiseppe, Filip Chytil, and Kaapo Kakko. That line combined for four points with goals from Chytil and Kakko. PDG added two assists. That is a line that I would wager is going to stay together for awhile with their early click of chemistry. Incidentally this is reminiscent of a 3rd line back in the day of Zuccarello, Brassard, and Pouliot. Unbelievable forechecking, active sticks, and jaw dropping hands–particularly in this case by Chytil.

Some say Tristan Jarry is still trying to find himself after Chytil’s forehand backhand tuck for the Rangers first goal. Another goal would be scored by Adam Fox with a blast from the point on a power play with some good traffic at the net. Lastly, Kakko would clean up a rebound shot by K’Andre Miller and snap it past Jarry. This was Miller’s his first point, and Kakko had one of the most genuine smiles I’ve ever seen from him as he continues to get more confident.

Though the Rangers took a 3-1 lead in the second, the Lindgren own goal occurred and then the Penguins had a flurry of chances. The Rangers kept them to 3-2 going into the third, and the Rangers certainly had their chances to score. Buchnevich in particular was buzzing in the third period doing everything in his power to extend the lead. But Jarry came up strong, and then he hit a goal post off a beautiful pass by Chytil, who got some ice time with Panarin and Buchnevich. This game would require OT. Awesome, that means Lafrenière gets some open ice right?….right? Wh-where is he??

I don’t have a ton of complaints in how tonight was played, in fact I would say this was one of the Rangers better games. But Quinn gave Strome (invisible) and PDG OT ice time over Lafreniere. While PDG might have earned it for sure with his play, there’s nothing Strome did to warrant that. I’m not tremendously worried through four games, but I do wish Lafrenière was able to get some looks with all of that open ice. This was not to be and we go to the dreaded shootout.

The shootout is something that I think Shesterkin can definitely say he needs to work on. He got beat by Guentzel on the backhand cause he bit and went into the butterfly. Then Kris Letang hit another perfect backhander on the short side that Shesterkin would probably say he could normally stop.

The Rangers only goal in the shootout was Panarin with a beautiful shot through the five-hole. Then Quinn made probably the oddest decision of the night and instead of putting out any of the skilled forwards, he put out…Tony DeAngelo? DeAngelo has some hands, but with all of that forward power I question it. DeAngelo didn’t exactly impress in regulation. His best chance was a slap shot that just went right into Jarry’s chest from the circle.

Overall I would say very good game with some really bad luck. Pittsburgh is racking up points with OT and shootout wins so it does not do well for the standings, but hopefully the Rangers can get them in regulation on Sunday. Thanks for following along!