In the “way too early to generate any real conclusions” category, we have three games of lines and pairings to review. Again, it’s too early to come to conclusions, but we can at least look at what has worked, what hasn’t, and what needs more time for the Rangers line combos. Since the Rangers returned a good amount of last year’s team, we are able to use last year’s results to see if anything has changed.

The below is from Charting Hockey, using expected-goal rates from the first three games of the season. Again, small sample size. 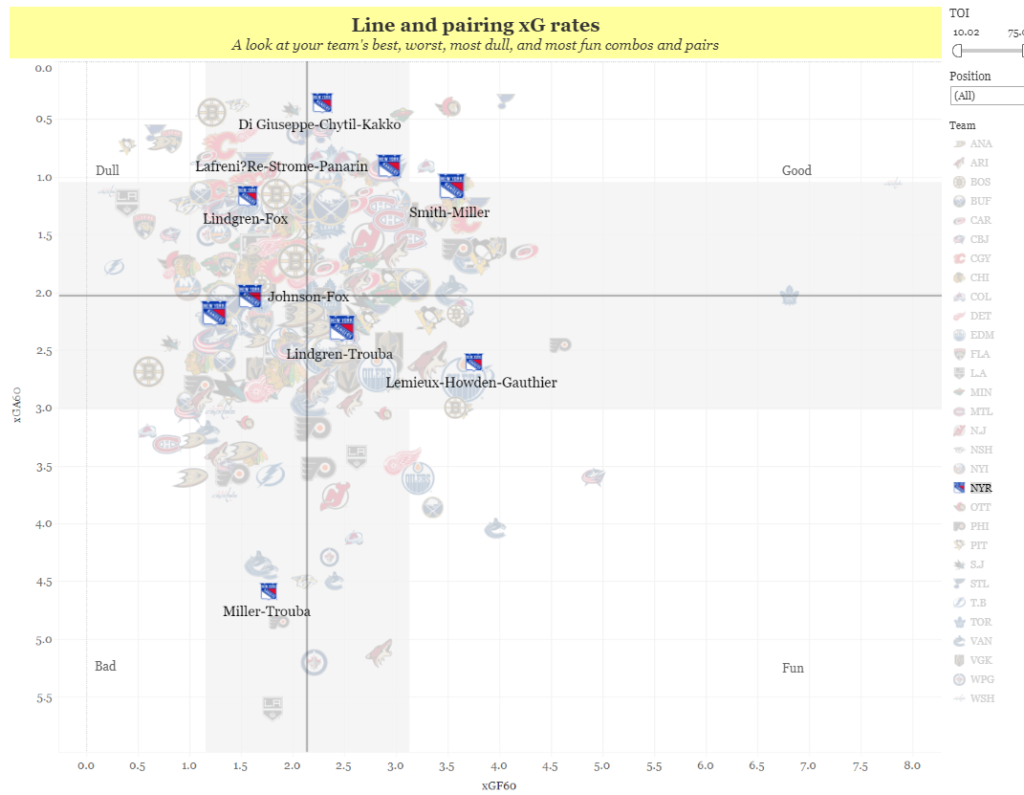 The most surprising thing to see in the upper right corner is the K’Andre Miller-Brendan Smith pairing. They were together for two games, and they looked good in two games. This helps us with the sniff test as well, since they looked very good against the Islanders. They also appeared to hold their own against the Devils.

Perhaps not as much of a surprise is the Phil Di Giuseppe-Filip Chytil-Kaapo Kakko line. Currently being viewed as the most consistent line, this trio has certainly cemented themselves as a solid line thus far. Kakko has appeared to put his terrible season behind him, having now looked somewhat strong in six (including August) games. It’s still early, but there was no way Kakko was going to repeat that disaster from last year.

Last but not least is the Ryan Lindgren-Jacob Trouba pairing. We can debate what Trouba is and isn’t until the cows come home, but this pairing has worked.

Most notably, Trouba’s expected-goals against came way down in the first two games with Lindgren. In Charting-Hockey’s visual, they are more in the “fun” category, attributed almost entirely to the track meet against the Devils.

Something we’ve spoken about a few times now, as Jacob Trouba very clearly needs a defense-first partner. He’s worked with Ryan Lindgren, as mentioned above. The pairing with K’Andre Miller was a complete failure. They looked atrocious. Yes it was one game, but I think it’s fair to say that shouldn’t be revisited.

Quite honestly, that’s the only combination that hasn’t worked thus far. The rest of the concerns are about the individual players, and not about the combos.

The KZB line is in the “bad” section right now, but I think we all know they are better than that. Pavel Buchnevich is off to a great start, but Mika Zibanejad has had a slow start. I wouldn’t be too concerned about this.

Surprisingly, the Rangers may have found a decent fourth line. The Lemieux-Howden-Gauthier line is firmly in “fun,” which is infinitely better than being in “bad.” Brendan Lemieux is an ideal 4LW, given his penchant for drawing penalties. Julien Gauthier, I believe, will eventually be a top-nine player, likely finding a role as a 3RW. With Howden finally getting off the top-nine and into a role where he is sheltered, he looks good.

This is all way too early to get any concrete conclusions, but there are some nice surprises here. It gives a good foundation for David Quinn to build on for some set Rangers line combos. There is a solid lineup to be found, it’s just a matter of playing Tetris.