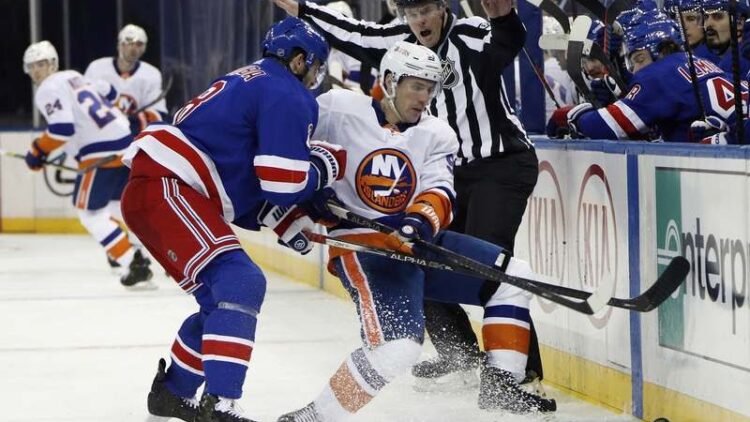 It’s been a minute since we last saw New York Rangers hockey. Like many of you, it was tough to not be able to watch our favorite hockey team we’ve grown accustomed to seeing in the early days of September/October. Despite a bad showing in the 2021 season opener, overall the excitement for the Rangers going into a season hasn’t been this raw for me since the 2013 season when the Rangers acquired Rick Nash.

Obviously, this is for much different circumstances with a 1st overall pick and highly-touted defenseman, but it’s raw excitement all the same.  There are still many questions and obstacles regarding some of the personnel on this team. It was evident in this blowout loss. But we will have answers soon enough. Let’s break this game down shall we?

An empty Madison Square Garden is absolutely weird to see while a hockey game is going, but this is the way it goes.

In typical New York Rangers fashion, we have two quick goals by the Islanders before we’re even five minutes into the game. Great puck movement on the Islanders power play led to the first one for Brock Nelson. The second one from Anders Lee came from a 2 on 1. There are going to be adjustments because of no pre-season for sure, but that is not the kind of start you want. The Islanders had the same lack of a preseason and came out fine. This rust and adjustment was evident in that first five minutes and on the Rangers first power play chance.

One thing is abundantly clear though and we aren’t even a period into the season, Jack Johnson is the worst player on this team by a long shot. He took the first penalty on his first shift which eventually led to a goal. Johnson was wildly out of position on Mat Barzal’s goal too. This made DeAngelo take his spot and get absolutely walked at the blue line before Barzal snapped it past Shesterkin. Down 3-0 after the first period is no way to start a game.

More of the same in the 2nd period. Even though the Rangers were putting some good shots on goal against Varlomov, he was up to the task. Igor Shesterkin on the other hand let in a few bad goals, and two others he was left out to dry. Sounds familiar huh? I’m curious if Quinn is going to go back to Igor on Saturday for the rematch, or if he will change it up and go with Georgiev. Quinn did not hesitate to throw the lines and pairings into a blender to try to spark something. It’s was go to the previous two seasons, but to no avail. If it were up to me you put Igor back in there to get game rhythm going and let Georgiev play New Jersey on Tuesday. But we will see what happens!

In the third, the Rangers just could not get anything going offensively. By the end of the game, the Islanders had gotten 8 power plays from some benefit from the officials. But this was mostly from the Rangers just making bone headed plays. One was a double minor from DeAngelo, including unsportsmanlike after the initial call. When you are in a shortened season like this –and much like the one in 2013– you need to turn the page and get your game straight almost immediately.  The penalty kill and the power play got some reps tonight, but will need to be polished if the Rangers have any aspirations for legitimate playoff contention this season.

Other than that, Lafreniere looked pretty good. He had some decent scoring chances in every period. His best one unfortunately resulted in a fanned shot about 10 feet out from the net. He was engaged, he forechecked, made some good outlet passes, this will be a fun player to watch this year.

K’Andre Miller on the other hand didn’t stand out like I hoped he would. Miller wasn’t bad by any means, but he also didn’t do anything super amazing. He is a 20 year old defensive rookie, so it is understandable. He is learning how to cut angles of NHL talent and use his body and skills to deny entries and bump guys off the puck on a consistent basis. It did not show consistently tonight. I have no doubts he will figure it out, this is one game.

That’ll do it for this one, just too sloppy of a game to keep going. The 2021 season opener for the Rangers is best forgotten. Revenge tour incoming Saturday fingers crossed!