Why the NY Rangers should name a captain 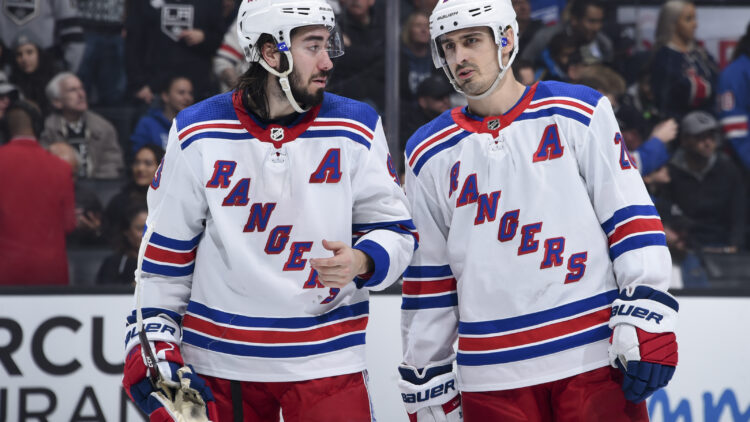 LOS ANGELES, CA – DECEMBER 10: Mika Zibanejad #93 of the New York Rangers and Chris Kreider #20 talk on the ice during the third period against the Los Angeles Kings at STAPLES Center on December 10, 2019 in Los Angeles, California. (Photo by Juan Ocampo/NHLI via Getty Images)

The last piece of roster news was announced yesterday by head coach David Quinn, and it was greeted with eye-rolls from a majority of the Rangers fan base. Rather than select a captain “at this time”, the NY Rangers announced four alternates: Mika Zibanejad, Chris Kreider, Jacob Trouba, and Artemi Panarin.

All four players are deserving of the leadership role that the coaching staff has bestowed on them. It’s also clear, even without the designation of a letter, that Zibanejad and Kreider are more or less unnamed co-captains. But the fact remains that the Rangers haven’t named a captain since Ryan McDonagh was traded in February 2018.

A lot of this has to do with the arcane NHL rule that a goaltender cannot be designated captain, nor can he wear a letter on his jersey. If that rule didn’t exist, it’s pretty clear Henrik Lundqvist would have been the Blueshirts’ captain, probably once Ryan Callahan was traded in 2014.

Chris Kreider told the media yesterday, “A lot of the time (naming a captain) is more for the fan base than anyone else.” To a certain extent, this is true. The Rangers have a clear and established group of leaders on what is the league’s youngest roster. Most players probably don’t care about who wears a letter and who doesn’t. Leadership often happens organically, with new players stepping into those roles as they mature.

But here’s the rub. By delaying the naming of a captain, they’re adding a mythology and prestige to the captaincy which really doesn’t exist. Having a captain in hockey is entirely normal, except if you’re the Rangers apparently. Of course, this puts more pressure on the player who is eventually given the “C”, and that’s why it matters.

It’s no secret that the captaincy weighed on Ryan McDonagh (he gave enough morbid post-game interviews to last a lifetime). Another player who notably struggled with the responsibility of the post was the great Brian Leetch. And that’s why, although Kreider may only see the captaincy as fodder for discussion among the diehards in the Blue Seats, there’s more to it than that.

I’m of the opinion that Mika Zibanejad should get the “C”. But it’s really a dead heat between him and Kreider. Both would be exemplary captains of the Rangers, and I think most fans (and the players) would probably agree. Is it possible that the Rangers are hesitant to name Zibanejad captain only to lose him via trade or free agency when his contract expires at the end of next season? Possibly, but if that happens, they have a readymade replacement in Kreider; no delay necessary.

In any event, the saga continues, and the Rangers will start the 2021 season without a captain. With that, I turn it over to you, the lovely BSB audience. Leave your thoughts in the comments on how the NY Rangers should handle the vacant captain spot.