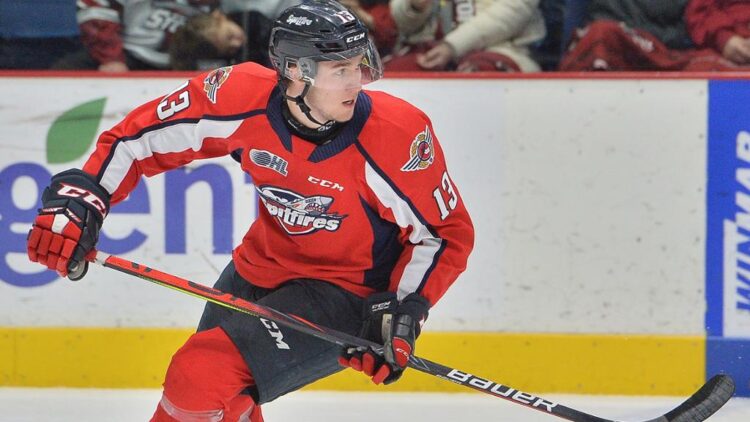 With their second round pick in the 2020 NHL Draft, the Rangers took forward Will Cuylle. The Rangers traded Lias Andersson to the LA Kings for the pick, so this is basically a trade of Andersson for Cuylle. Bob McKenzie’s draft board had Cuylle at #45, so based on that this appears to be a bargain. The scouting report on Will Cuylle is a big power forward with a great shot.

This season, the big winger put up 22-20-42 in 62 games with the Windsor Spitfires. This was only a one point increase in production from his age-17 season.

It’s worth noting that I am no draft expert. I did a lot of Googling and Youtubing. You should be checking out sites like Future Considerations, Elite Prospects, Dobber Hockey, and others on Twitter (@SternScouting,  @aj_ranger, @ManUtdTobbe, and I’m sure I missed a bunch).

Cuylle is a big winger at 6’3″ and 204 lbs. But he is a solid skater, something that the Rangers appeared to have focused on this year. Usually there is inherent risk when drafting these big kids, as the skating sometimes doesn’t match the production. That doesn’t appear to be a concern with Cuylle, who matches his solid skating with great lower body strength. He’s surprisingly elusive for a big guy.

Cuylle’s greatest asset is his shot. He has a great combination of power and stealth in his shot selection, making him a solid goal scorer. As you can imagine, the power forward also has a nose for the net. His deflections in front need work –he’s no Chris Kreider– but that’s a skill that can be taught.

When Cuylle was drafted, again immediate comparisons were made to Ryan Gropp. That again is an unfair comparison, as Cuylle isn’t being propped up by Mat Barzal. Cuylle is a much better skater, again a common theme, and has a better skill set. I understand the comparisons with Gropp, but there isn’t much there other than fear.

Cuylle’s lack of vision is the big concern here. It limits what he sees as potential options in all three zones. There’s also concern that since he’s so strong at a young age, he’s been able to rely on that to success. Naturally at higher levels, he won’t have that advantage. However that doesn’t appear to be as big a concern, as he does have the skills to get to the next level.

The scouting report on Will Cuylle shows a ceiling of a middle-six power forward. However he is a project pick.  The big thing is watching for continued improvement. Cuylle didn’t take a big step forward from his draft -1 year to his draft year. That’s a red flag. This coming season, if there is one, is a big one for Cuylle. Showing improvement quells some of these concerns.