The dog days of Fall have arrived. Late October and November this year will be comparable to late July and August. Usually we are getting into the swing of things, but this year we wait. The Rangers are more or less done with their offseason. There’s very little to expect until the season gets started. We can review what the NY Rangers have done this offseason, and what is left to do.

1. The only major item left on the agenda for the Rangers is what to do with Ryan Strome. It’s clear they want to trade Strome, to the point where walking away from his arbitration award is on the table. Let’s get straight to the point: Letting Strome walk for nothing is folly. Even if it’s a marginal return, get *something* for him. Or keep him for one more year and then let him walk as a UFA. But getting nothing for this year is a fool’s errand.

2. Brendan Lemieux remains unsigned, but I don’t foresee that being a long term issue. Lemieux held out a little bit last year, but this year he has arbitration. I highly doubt Lemieux gets to arbitration. Something, likely a 2 year deal, will be worked out. Lemieux shouldn’t be overly expensive either, as he simply doesn’t have the numbers to back up a long term and/or more expensive contract.

3. Both Boo Nieves and Steven Fogarty have departed the Hartford Wolf Pack. This leaves the longest tenured Pack players to be Brandon Crawley –who spent most of last season in the ECHL– and Gabriel Fontaine. That is a fairly significant amount of turnover. The Rangers need to get a positive atmosphere and winning team there. Maybe the turnover was needed. Let’s see how this plays out.

4. There has been a lot of discussion about where to play Tony DeAngelo if he moves to the left side. I initially thought he should play with Jacob Trouba, but I’ve been convinced otherwise. DeAngelo and Adam Fox were so good together when they played that they deserve to continue to play together. That would give the Rangers a legitimate second strong pair on defense.

5. That would leave Ryan Lindgren to play with Trouba. Lindgren had a great season last year, but there were some concerns that he was riding Fox’s coattails. That’s always going to be a concern, since Lindgren isn’t the best puck mover. He’s not a train wreck with the puck, he just has room for improvement. That said, Trouba has historically performed much better with a defense-first partner. If the goal is to maximize assets and put players in a position to succeed, then Lindgren-Trouba and DeAngelo-Fox is the best bet.

6. The goal should *always* be to maximize assets and put players in a position to succeed. A review of the NY Rangers offseason moves should keep this critical piece in mind.

7. As it stands today, assuming the Rangers do part ways with Strome, then the center depth is Mika Zibanejad-Filip Chytil-Brett Howden as the guys who will be on the NHL roster. After that it’s a competition between Patrick Khodorenko, Kevin Rooney, and Morgan Barron. Center depth wins Stanley Cups. That won’t cut it.

8. It hasn’t been talked about that much, but this is a big year for David Quinn. It’s his third year. He has great talent up front. He has a much better defensive assistant coach in Jacques Martin. This is the year the Rangers need to show improvement in all three zones. The first thing I’m looking for is giving up the blue line by design. If that continues, there’s very little the Rangers will be able to do defensively. That also plays into continued offensive pressure. That tactic needs to stop.

9. One last thing, and it’s a bit of a rant. I find it humorous that so many people here (yes, I read the comments) lambasted any defenseman that was all offense and no defense, yet get touchy when you point out Tony DeAngelo is all offense and no defense. These are also the same people who say defensemen in the NHL need to defend, but again get touchy when you point out DeAngelo can’t defend. I know I’m biased. But if you’re going to call me out on my bias, which again I readily admit, then admit your own bias that you don’t care about any of his faults, you just like the guy. If you fail to admit your own bias, I’m just going to ignore you. And yes, I’m talking to you.

10. DeAngelo is one of the best offensive defensemen in the game. He’s also atrocious defensively. Just for comparison’s sake: 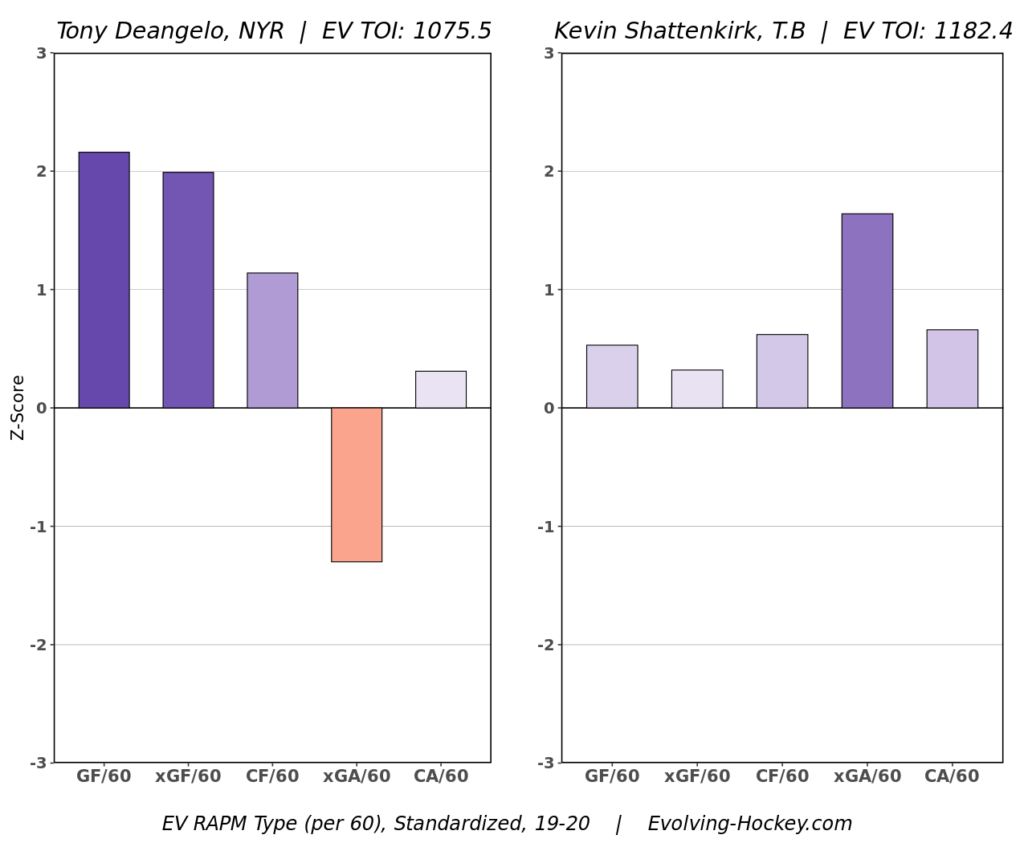 I just want to see what the reaction to this is. I love carnage.