Larry Brooks suggested yesterday that the NY Rangers should target Matt Martin in the offseason. Martin, who is a UFA this offseason after a fairly successful run with the Islanders, would add some grit and snarl to the fourth line. The 31 year old forward would come as a rather expensive offseason add for a team that is limited on cap space at the moment. The Rangers also have more pressing matters.

Matt Martin is not really that good. He certainly adds a physical presence, but that’s really all he does. He’s a very one-dimensional player. 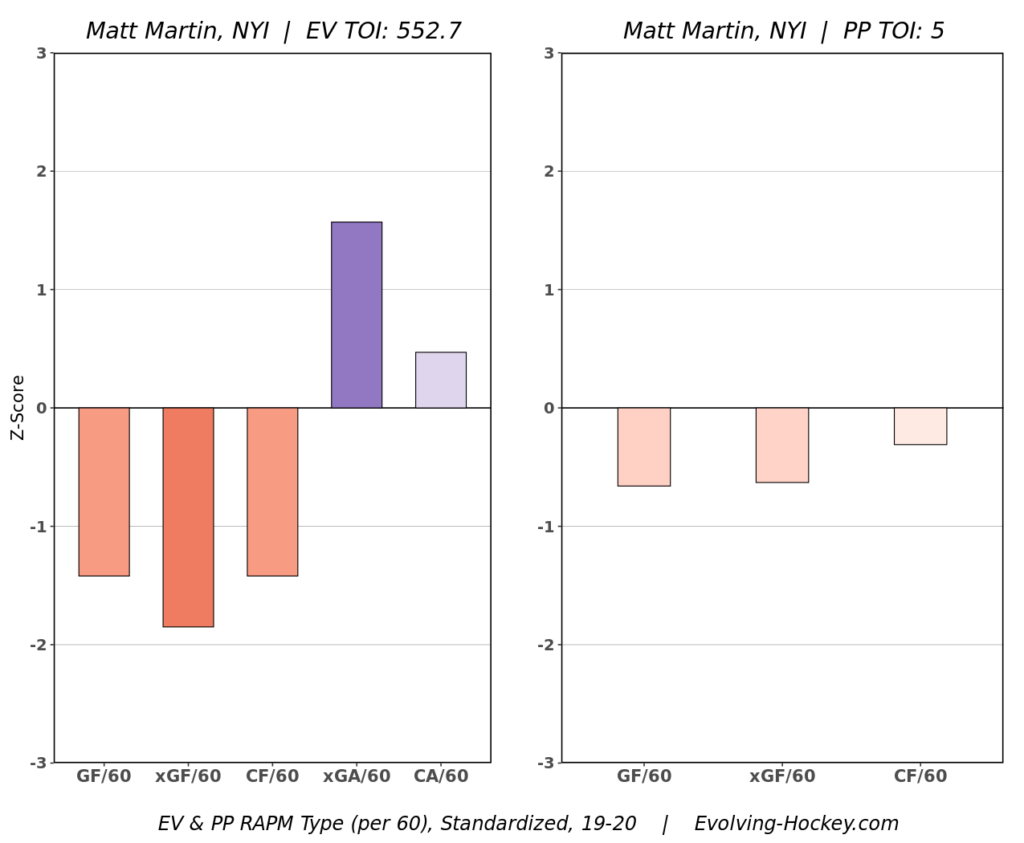 There’s nothing wrong with going after players with some snarl to their game. However when it comes to Martin and fourth liners, ensuring there is more to their game than just punching is critical. Martin is an offensive black hole and somewhat ok on defense. At the contract he’s going to sign, you need more than this.

The contract is also going to be a concern. Martin is three years at $1.57 million. It doesn’t sound horrible on the surface. The optics of using half the Henrik Lundqvist buyout savings to sign Martin aside, it’s not fiscally responsible. The Islanders are in a cap crunch because they have $10.85 million tied up in fourth liners Ross Johnston, Casey Cizikas, Leo Komarov, and Cal Clutterbuck. Now they will have issues re-signing Mat Barzal and Ryan Pulock.

There Are Better Options

This is the key piece as well. If the Rangers do need to replace Jesper Fast, there are some much better low cost options available. Specifically, Stefan Noesen. That’s just from the free agent list too.

Internally, the Rangers have too many bottom-six options to just throw money at a puncher. They tried that with Micheal Haley, and it didn’t work out. They have other options like Morgan Barron, Justin Richards, Austin Rueschhoff, and Patrick Khodorenko. None of these are noted punchers, but they can actually do more than just punch.

Finding cheap options for your fourth line is how the best teams win. It’s worth noting that neither Stanley Cup Final team has a noted puncher either. There are too many reasons why Matt Martin and the Rangers just doesn’t work.