Rangers swept by Hurricanes, and the 2019-20 season finally ends 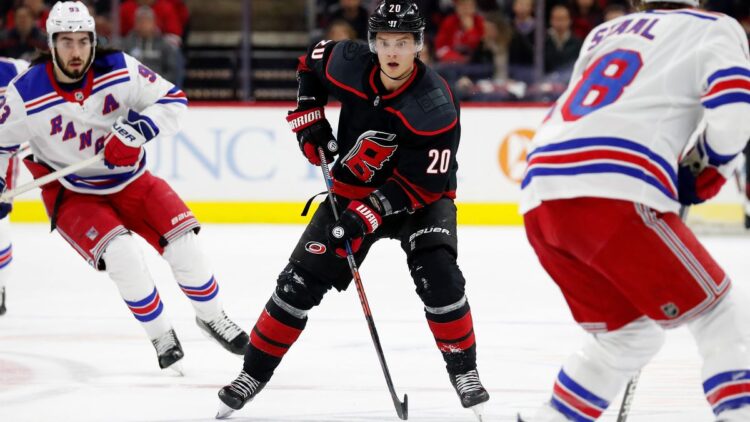 The NY Rangers entered Game 3 of their Stanley Cup Qualifiers series against the Carolina Hurricanes needing a win to stay alive. Even with Igor Shesterkin returning to the net, it was difficult to envision the Blueshirts turning this series around. Especially given how stifling and dominant Carolina was in games 1 and 2. But the Rangers surprised us for two periods at least. They gave us a brief glimpse into the future of this young team that’s still at least a step or two away. In the end, the Rangers were swept by the Hurricanes.

The first period was the Rangers’ best of the series by a wide margin, as they took the play to the Canes. But James Reimer made several strong saves. The Rangers outhit, outshot, and outplayed Carolina in the first, but came away with no goals to show for it.

A lot of players had performances that were night-and-day comparisons from their early series showings. Chris Kreider was at the top of that list. He played like the forward that earned a contract extension last winter, and scored an absolutely vintage Kreider goal just 12 seconds in the second period. Jacob Trouba’s smart one-touch transition feed sprung Kreider, who dipped the shoulder and finished off his patented power move.

Chris Kreider scores early in the second to give the #NYR a 1-0 lead pic.twitter.com/dItPX3VWO2

Unfortunately, the Rangers didn’t build on that lead, nor did they hang onto it for long. Just 3:06 later, Carolina had an extended shift in the Rangers’ zone. It started with the Canes’ fourth line dominating their Blueshirts’ counterparts, but a Marc Staal broken stick enabled Carolina to complete a line change and get their big guns on the ice. With the Rangers running around, Teuvo Teravainen was able to walk into the slot and roof a backhander past Shesterkin.

The Rangers bounced back from the goal though, and continued to show signs of a team that had finally adjusted to the demands of playoff hockey. They generated an incredible sequence of chances on Reimer late in the second, but couldn’t break through. Of course, that would come back to haunt them.

All of the saves for Reimer & co. pic.twitter.com/nihHc9WVii

The third period was an unfortunate reversion to what we saw from the Rangers in games 1 and 2 of this series. Carolina simply dominated the Rangers, .Once they took the lead at the 5:07 mark of the third, the rest of the game (and series) felt like a foregone conclusion. Warren Foegele (so many E’s… why so many E’s?) tipped in former Ranger Brady Skjei’s shot for the winner. It was another goal that came off of extended time in the Rangers’ zone.

Then Sebastian Aho embarrassed both Trouba and Tony DeAngelo. Not much more needs to be said here, though outside of this moment, Trouba had probably his best game as a Ranger.

In the end, the Rangers were second-best to the Hurricanes in all facets of the game. Carolina’s top players stole the show, and the Rangers simply had no answer for them. The Canes’ depth also prevailed, as the Rangers over-reliance on their top players was exposed as a critical weakness. The bottom six and defense must be addressed this offseason.

Speaking of the offseason, it’s here (again), and we’ll have plenty to discuss as the Rangers look to build on the progress they made this season. Because the end of a season is always upsetting, here are a few reasons to be excited about the future New York Rangers: Kaapo Kakko, Filip Chytil, Artemi Panarin, Mika Zibanejad, Adam Fox, Igor Shesterkin, Ryan Lindgren, Vitali Kravtsov, Nils Lundkvist, K’Andre Miller, and of course a 12.5% chance at the #1 overall pick in the NHL Draft.