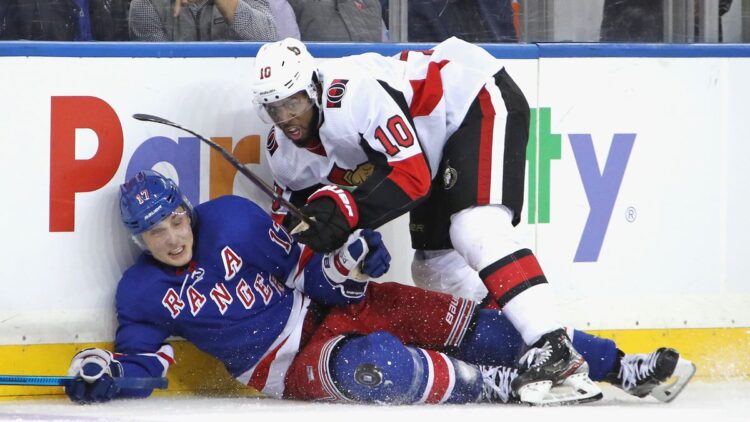 The Rangers couldn’t afford injuries. Now with Jesper Fast possibly out for an extended period of time, the impact sends ripples down the lineup. The winger played just one shift before being leveled by Brady Skjei. The Rangers gave up a goal on the shift and Fast didn’t return. The Rangers played with 11 forwards and were pretty anemic on offense.

Given the new rules, the Rangers won’t be publishing Fast’s injury status. He will just be “unfit to play” for however long this lasts. There’s a lot of speculation that it was a concussion, given how lost Fast looked on the shift. But that’s all speculation. What isn’t speculation is that there is a significant chance Fast doesn’t play tomorrow in Game 2. The Blueshirts didn’t have much forward depth to begin with, and this injury just brings this to focus.

If the goal is to minimize Jesper Fast’s injury impact, then moving Kaapo Kakko up to the second line seems to be the next logical step here. Kakko plays a different game than Fast, so that’s not necessarily a guarantee to work. In this scenario, the Rangers would need someone with offensive skill to replace Kakko on the third line. The natural choice, again to avoid impact throughout the lineup, is to see what Vitali Kravtsov can do in a third line role. This would leave the fourth line relatively untouched.

Another option is to move Brett Howden to 3RW, which is not the best option. Given how poorly Howden has played in any role, leaving him on the fourth line is the best bet. However David Quinn has this infatuation with Howden, so this is a realistic option. Hopefully this one doesn’t come to fruition.

The Rangers didn’t have set lines after Fast’s injury, so a total retool could be an option as well. This isn’t the best option either, as the Rangers have some chemistry up and down the lineup. In theory, the KZB line stays the same, but that’s it. We saw a Panarin-Chytil-Kakko line at moments last game, which is quite possibly the 2nd line next year. That leaves a hodgepodge of options for the bottom six.

Ryan Strome, in this case, would try to carry the third line with Phil Di Giuseppe and whomever Quinn deems appropriate for that line. It could be Kravtsov, it could be Julien Gauthier. It could be Howden. The rest of the options would make up the fourth line.

In this scenario, expect the lines to be thrown into a blender for much of the series. It could work, maybe?

Ride It Out For A Game

Brendan Lemieux’s suspension only lasts one more game. It’s safe to assume he would return in a fourth line role when that is up. In this case, the Rangers riding this out for a game, using option #1 above, is the best course of action.

In this scenario, Kakko moves up to the second line where he most likely stays. Given how well Gauthier has played, he’s earned a role on that third line with Chytil and Di Giuseppe. Lemieux would go to the fourth line with Howden and McKegg.

This would require the Rangers to figure it out for Game 2, which likely means a pro debut for Kravtsov for at least one game.

No matter which way you slice it, Jesper Fast’s injury impact is tough to manage for the Rangers. For everything to work out for the Blueshirts, they needed to stay healthy. Now, they will need to find some chemistry, and find it fast.