Could Pavel Buchnevich be the next big trade chip for the NY Rangers? 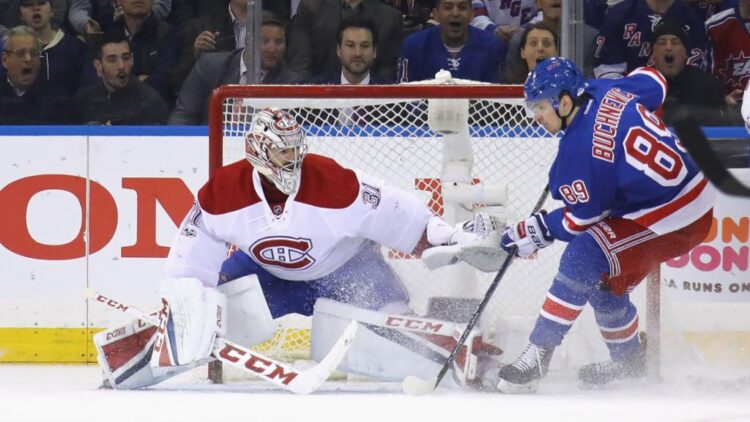 As the Rangers move into the next phase of their rebuild, looking into the longer term outlook is going to be on the forefront of minds. With so much focus on Tony DeAngelo and Ryan Strome due to immediate impact, it’s human nature to overlook other parts of the roster. Right wing is becoming crowded, and even with Jesper Fast’s expiring contract, there is a logjam. It makes you wonder if the most expensive in the short term, Pavel Buchnevich, is the next big trade chip for the NY Rangers.

Thinking about RW next year for NYR with Buch, Kakko, and hopefully Kravstov (TBD) as regulars. Fast is likely to get a 3 or 4 year deal at ~$2.9 per via Evolving Hockey.

Fast has been a consistently good middle to bottom six NHL player. If he's re-signed that clogs up RW quick. pic.twitter.com/4ainzs8Nsb

I blame Rob for bringing this up. While the tweet centers around Fast, looking at cap implications 2-3 years down the road, with a flat cap, and Pavel Buchnevich’s name is starting to come to mind. Buchnevich, the Blueshirts’ top RW at the moment, has one year on his deal left before becoming an RFA with arbitration rights. He’d have one year of cost controlled contract status before hitting UFA. Fast doesn’t even have an impact on Buchnevich because they are different players with different roles.

The contract expires after next season, in which he will likely get a hefty pay raise. Even assuming the flat cap, Buchnevich is sporting a $3.25 million cap hit and a $3.5 million salary. His qualifying offer will be around $3.5 million as well. However that is very cheap for Buchnevich. He’s due a raise.

The major contract factors now, and these impact his trade value, are his lack of long-term commitment and his pending raise. It’s expected he could get as much as $6 million annually on a long-term deal.

The good news is that after next season, the Rangers shed Brendan Smith, Henrik Lundqvist, Marc Staal, and the big year of Kevin Shattenkirk’s buyout. The bad news is that money will likely be taken up in part by Tony DeAngelo (if he’s not traded) next season, and then Filip Chytil, Ryan Lindgren, and Igor Shesterkin when Buchnevich’s contract expires. There are also extensions for Kaapo Kakko and potentially Vitali Kravtsov to consider the following year.

The last two seasons, he’s been on a 50-point pace while clicking on the top line with Mika Zibanejad and Chris Kreider. He does a lot more on that line than you’d think, driving offense and defense while facing top competition. He’s just a very good RW who doesn’t do anything flashy. He just puts up points and does the little things.

There is a lot of evidence that supports Buchnevich as one of the driving forces on the KZB line. Much like how Jesper Fast does a lot of the little things for Strome and Panarin.

The Depth And The Problem

Much like with DeAngelo, there’s a chance that Buchnevich sees himself as a 3RW in the near future. By no fault of his own, Kakko and Kravtsov have higher offensive ceilings. That’s just how it plays out right now. It’s also why Pavel Buchnevich might find himself as the trade chip. The good thing for Buchnevich is that the Rangers can kick this can down the road a few years.

It is likely Kakko forces himself into a top-six role as soon as next year, with Kravtsov most likely sliding into the 3RW role Kakko played this year. Assuming both players stay on their expected development paths, both could be outscoring Buchnevich as soon as the 2021-2022 season. These are all question marks, and nothing is guaranteed. This makes it different than the DeAngelo situation, in which he’s already the 3RD at even strength by no fault of his own.

This is also where the flat cap burned the Rangers. They will free up cap space. Perhaps the cap gurus in the front office have found a way to keep all three for at least the next Buchnevich contract. Where there’s a will, there’s a way.

In theory, a four year deal at around $6 million –less than Kreider’s $6.5 million cap hit– is market value that might work for the Rangers. With contract bridges Rangers can buy themselves time. They can also hope for cap ceiling increases over time.

However there is value in having Pavel Buchnevich as a trade chip. It’s arguable that he might have the same value or more than DeAngelo given the whole package of factors. Many of the decisions made this offseason will impact Buchnevich’s future with the Rangers.