A glimpse at 2C: Filip Chytil vs. Ryan Strome

As the New York Rangers look to turn the corner from rebuild to contender, the 2C position is going to need to be filled. Ryan Strome held that position this year and had great success with Artemi Panarin, but there are concerns about Strome’s ability to sustain that output given his contract projections. The general consensus is that Chytil is the 2C of the future, but the question is whether or not he can handle that load now.

When it comes to raw point totals, of course Strome has the clear advantage. Strome had a career year of 18-41-59 (3-14-17 on the powerplay, 26 primary points) in 70 games, playing almost entirely with Panarin. His production took a big hit after the trade deadline (small sample size warning), with just one assist in those seven games.

Chytil was also on pace for career highs with a line of 14-9-23 (1-2-3 on the powerplay, 18 primary points) in 60 games. However unlike Strome, Chytil didn’t have Panarin. Chytil’s most common linemate was Kaapo Kakko, but his linemates were always rotating. Quality of teammates does matter here, since no one on the Rangers is quite like Panarin.

While it is extremely difficult to isolate Strome from Panarin, there are some ways to accomplish that. HockeyViz has isolated impact charts, which tells part of the story for both players.

It doesn’t take rocket science to show that Strome had a solid offensive impact at even strength (red = more shots, blue = fewer shots). The interesting thing here is that his powerplay impact wasn’t as strong as you might think (green = more shots, purple = fewer shots). Also worth noting that his defensive impact wasn’t actually that bad, within the full season context that was the horrible Rangers defense.

It’s the middle part here that intrigues me, as Strome is on the wrong side of isolated impact on producing goals. That is consistent with the questions brought up about his ability to produce without Panarin. As we’ve seen, lines get thrown in a blender often. This is an important aspect of Strome’s game that should not be overlooked. 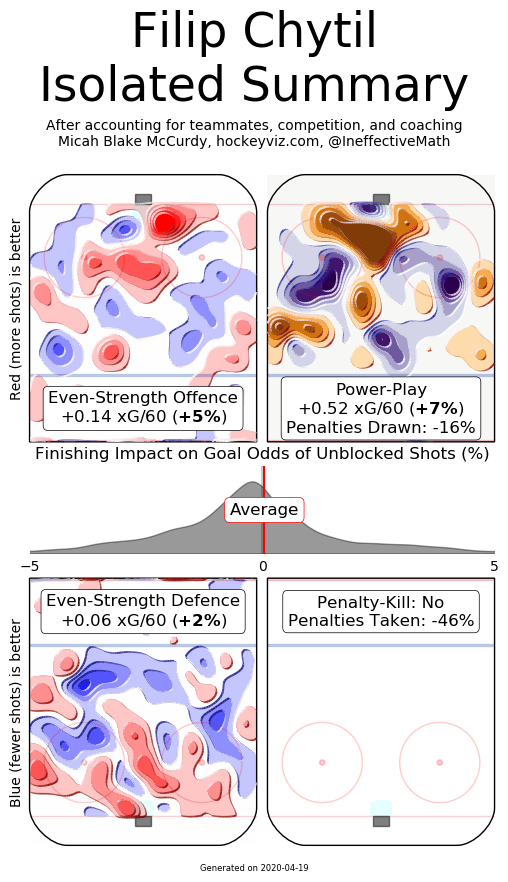 As for Chytil, his even strength offensive impact was lesser than Strome’s, but his powerplay impact was significantly better. Chytil also has better defensive numbers, but hasn’t played on the PK yet. Chytil also comes up as “average” in generating better chances for goals.

What this suggests is that the Rangers are certainly enjoying Strome’s season, but there is a lot of evidence to say that this may not be sustainable for him. Is it certain? Not at all, but the evidence suggests it is more likely than not that his production takes a hit. When taking into account his potentially large contract cost, it becomes a risk.

As for Chytil, the evidence suggests he’d do well with more minutes and better teammates. Does it mean he is guaranteed? Not at all, but the numbers suggest he has performed well enough to earn that shot. Given his cheaper cost, it is far less risky to give your very talented 21-year-old that chance.

In the game of managing hockey rosters, managing risk is a critical component. Strome has the chemistry with Panarin, but the rest of the evidence suggests his production is going to come down. With Chytil, there is risk that he is not ready for the 2C spot, although that risk is mitigated by his significantly cheaper cost.

When the Rangers traded Derick Brassard, they were trading him potentially one or two seasons too early to avoid the latter downfall years. They also landed Mika Zibanejad one or two seasons before he’d hit that next level. Is it possible the Rangers can do the same with Strome? They’d be silly not to try, especially with in-house options available to take his spot in the lineup.